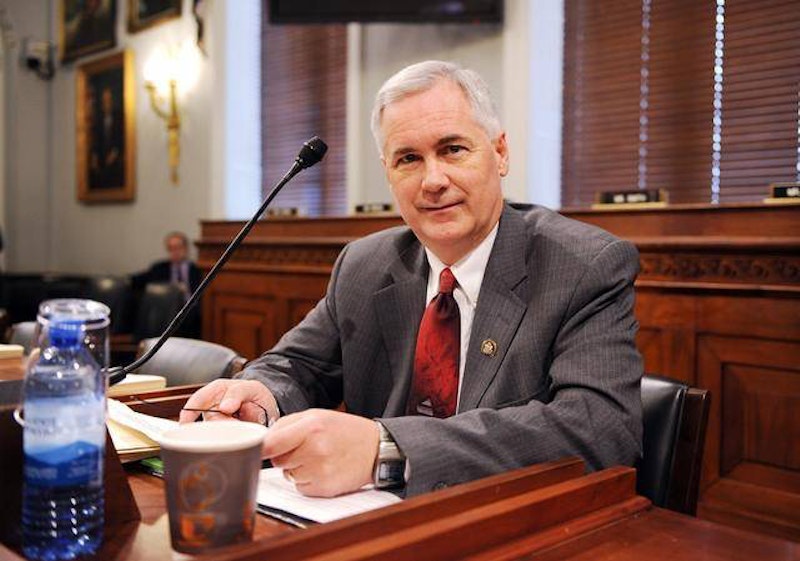 Many conservatives care about animals. Republican speechwriter Matthew Scully offered an impassioned defense of non-humans in his 2002 book, Dominion: The Power of Man, the Suffering of Animals, and the Call to Mercy. More recently, right-leaning columnist Charles Krauthammer wrote he's "convinced that our great-grandchildren will find it difficult to believe that we actually raised, herded and slaughtered [non-humans] on an industrial scale—for the eating." John Cleveland, a spokesman for the Humane Society Legislative Fund, formerly worked for Senator Lindsey Graham.

And yet, Republican legislators, as a group, are dramatically less committed to animal welfare than their Democratic counterparts. With this in mind, I've compiled a list of the five most anti-animal Republicans in the House of Representatives. People who care about non-humans—but vote Republican—should oppose these politicians in their party primaries.

Using HSLF's 2016 Humane Scorecard, there was initially a seven-way tie for least animal-friendly Republican representative, all of whom received shameful zero-percent ratings from HSLF. To break this tie, I had to examine scores going back to 2012. I gave newer members the benefit of the doubt, ranking those with longer, but equally anti-animal records as less compassionate. When representatives had identical ratings and lengths of time in the House, I listed the member who took more money from the agribusiness sector in 2016 as more anti-animal.

5. Rick Allen—The Georgia congressman supported the Sportsmen’s Heritage and Recreational Enhancement Act, which pandered to big-game hunters and other anti-animal groups. Allen received nearly $38,000 from the agribusiness sector in 2016, according to OpenSecrets.org.

4. Doug Collins—Another Georgian, Collins didn’t even sign a group letter to the Agricultural Appropriations Subcommittee, seeking increased funding for enforcement of the Animal Welfare Act, the Horse Protection Act, the Humane Methods of Slaughter Act, and a federal animal fighting law, as well as other pro-animal programs. In 2016, according to OpenSecrets.org, Collins raised over $27,000 from the agribusiness sector. A few years ago, he defended the Chattahoochee National Forest Fish Hatchery, saying, "Providing our nation's anglers with the recreational enjoyment and opportunity to catch fish is an important service."

3. Bill Huizenga—This Michigan representative voted for an amendment that would remove Endangered Species Act protections from gray wolves in the lower 48 states. Huizenga received just a little over $6,000 from the agribusiness sector in 2016, according to OpenSecrets.org. In 2014, he said, "Rest assured, I will continue to work in Congress to ensure the West Michigan traditions of hunting, fishing, and shooting are around for future generations."

2. John Duncan—The Tennessean couldn’t be bothered to co-sponsor the Pet and Women Safety (PAWS) Act, which would protect human and non-human victims of domestic violence. Surprisingly, in 2016, Duncan received no money from the agribusiness sector. In 2005, he defended a legislative assault on the Endangered Species Act, saying, "There are some extremist groups that simply cannot seem to admit we have made this progress."

1. Tom McClintock—The Californian voted against the Frank R. Lautenberg Chemical Safety for the 21st Century Act, which would reduce and eventually replace animal use in chemical testing. According to OpenSecrets.org, McClintock raised $25,000 from the agribusiness sector in 2016. Defending blood sports in a speech last year, he said, "Outdoor sporting activities, including hunting and fishing and recreational shooting, are deeply ingrained in the fabric of America's culture and heritage that are now under attack by the radical left."