Has Anyone Seen Melania? 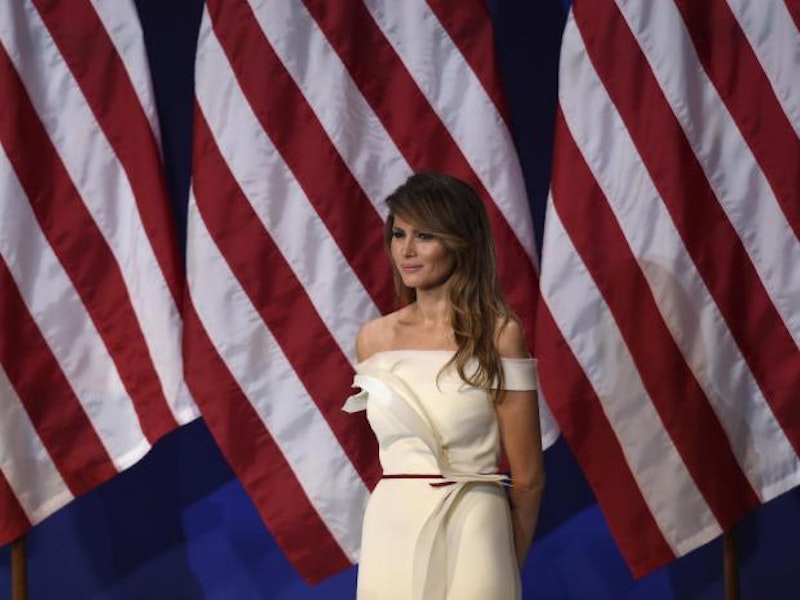 Blink your eyes and you’ll miss Melania Trump. I’ve rarely seen her since the day after her husband’s inauguration. Donald Trump told The New York Times his wife would be in D.C on the weekends, yet it seems she’s opted to skip the weekend jaunts and remain in Manhattan.

I did see photographs of her when she was at their Mar-a-Lago home in Palm Beach at a Super Bowl party, but she and her husband didn’t look very happy. In fact, they never really look like a happy couple to me. Maybe it’s just because I was used to seeing the Obamas always smiling and laughing and chiding each other. I’ve seen the Trumps do a sort of no-touch kiss. They air kiss. And then there’s the three-second on, three-second off smile routine that Melania does when publicly photographed.

So, Trump’s moved into the White House as a single guy. Word was that Melania was waiting for their son, Barron, to finish his school year to join her husband but now rumor has it she may never leave their penthouse in Trump Tower. The President told ABC that living alone is just fine. But is it just fine for New York City, which pays $500,000 a day to protect Trump’s building when he’s in town? The security infrastructure alone has caused numerous problems for traffic and local businesses and isn't sustainable forever.

The East Wing is empty and it raises new questions about what role, if any, the new FLOTUS will have. Traditionally, ceremonial entertaining is one of the duties for a First Lady. Melania bucked that tradition when Japan’s First Lady Akie Abe was in town. Abe was alone on two scheduled visits, one to Gallaudet University and another to the Japanese Embassy. The First Lady would normally escort Abe as did Michelle Obama and Laura Bush in past visits.

Despite the fact that her decision has made for a void for the position of First Lady, which is usually a hectic and heavily scrutinized role, I don’t blame her. I’d stay as far away from the fishbowl of Washington, D.C. and our new president as I could. Maybe telecommuting wouldn’t be such a bad idea for the next four years.