Richard Lourie's book says the Russian’s power will be short-lived. 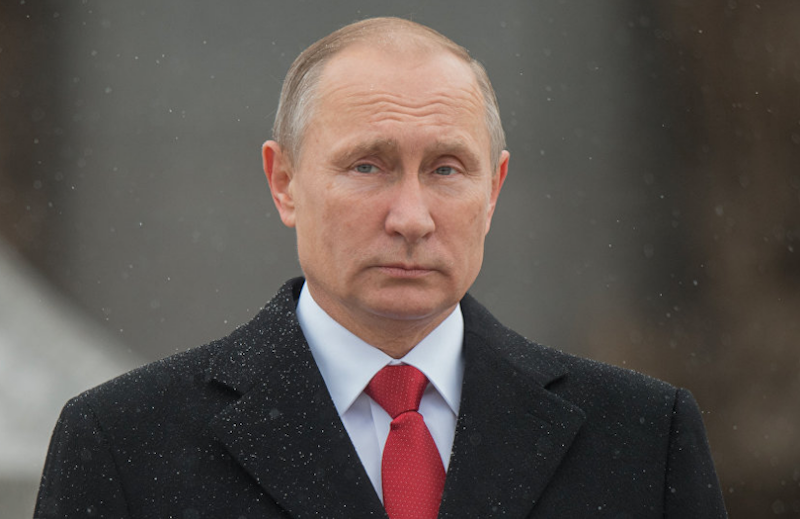 Russian President Vladimir Putin is a dark, Machiavellian character to many, although a substantial number of Trump voters are drawn to his traditional conservative values and ability to project strength, a trait they found lacking in President Obama.

While there's no shortage of opinions on the man, not many Americans know who he really is, just as few understand the Russian people. Putin doesn't offer many clues, preferring to let the media project a highly-crafted image of him as a manly, resolute leader who’s determined to restore the national pride that Russians long for. For those looking for more insight into what makes Putin tick, and what could be in store for his and Russia’ future, Putin: His Downfall and Russia's Coming Crash, by longtime Russia hand Richard Lourie, provides a wealth of nuanced insights put in detailed historical context.

After the Berlin Wall fell, Mikhail Gorbachev and then Boris Yeltsin brought hope of change towards democracy and open markets, but by the time Yeltsin handed over power to former KGB operative Putin in 1999, that optimism had faded. Yeltsin himself had laid the groundwork for what was to become Putin’s Russia by forming an alliance with the oligarchy in order to fend off the Communists prior to his 1996 re-election. When Putin took over, he sacked the oligarchs, replacing them with his own incompetent cronies and firmly established a system of one-man rule. No one mourned the passing of the Soviet Union more than Putin, but no one has benefited more from it.

Putin's unchecked control over energy-rich, nuclear-armed Russia makes him generally considered the most powerful person on earth. But as the author, who's a columnist for the Moscow Times, points out, his greatest fear is severe economic pain eventually leading to a mob dragging him through the streets of Moscow. To stave off the possibility of revolutions and putsches, Putin in 2016 formed his own army of 400,000 soldiers that reports directly to him. The National Guard (Rosgvardiya) has nine tanks, numerous SWAT teams, 29 airplanes, and 70 helicopters. Putin’s former bodyguard, Viktor Zolotov, heads the Russian President’s ever-growing Praetorian Guard. Zolotov’s in charge because the Russian autocrat, like Donald Trump, values nothing more than loyalty.

While there's a jittery feeling, outside of the Trump sphere of influence anyway, that Russia poses a number of threats to the U.S., the intel community hasn't had great success in pinpointing what Putin's intentions are. Russia interfered in the presidential election and will strike again, but where? Lourie explains that much of this failure stems from narrow thinking and an inability to see that the Russian system is fundamentally different from America’s. While in the U.S., government, crime, business, and secret police are separate entities, they intermingle in Russia, and Putin has a hand in all of them. Analyzing Russia through the lens of the American paradigm will yield inaccurate conclusions.

Russia’s a Darwinian society, Lourie reminds us, and cannot be analyzed as if it were a nation of laws. Putin’s rules of power, he writes, are “attain, maintain, and retain.” Putin believes that the U.S. shows it has a short historical memory when it forgets about its numerous historical incursions into other nations (e.g. participation in the assassinations of Allende, Hussein, and Gaddafi), but when Russia acts similarly, it's a crime against humanity.

Lourie points to John McCain as an example of how a poor understanding of Putin creates barriers to communication and makes predicting his future actions difficult. The Arizona senator said that when he looks into Putin’s eyes he sees a KGB thug. Putin and most Russians, on the other hand, see his stint with the state security agency as an honorable and glorious service to the nation. While the U.S. prides itself on being an open society with equality for all, Putin sees us as weak and feckless. A major reason he intervened in Syria was to highlight this, and he made his point when he came off looking like a man of action while Obama looked more like someone on the sidelines. Putin knows that he doesn't have to be right to command respect of the world. He only has to take the initiative, and then wait for Western leaders’ predictably meek responses.

The best way to think about Putin and predict what he may be up to next is to realize that he's not motivated by merely a lust for power. His overarching goal is simple—to ensure his own personal safety. He knows that once he's forced out of power, his fate will be in the hands of the mob. While Putin's been considered the world's most powerful person for several years running, the author is quite sure, as his title indicates, that he won’t be able to maintain his reign of corrupt post-communist authoritarianism indefinitely. Putin's fatal mistake, Lourie writes, is his failure to wean the economy off gas and oil, leaving his nation with a brittle and undiversified economy that's hard-pressed to meet the expectations of its citizens for improved living standards. Already Russians have faced what's been described as a battle between the TV and the refrigerator—what the talking head tells people vs. what they see when they open that door. The TV can only win for so long.

Putin chose to take advantage of an oil-price boom to make himself and his cronies rich. Perhaps he felt threatened by the decentralization of power that a 21st-century economy would bring. Putin's brand of ethnonationalism has alienated the West and isolated Russia from its technologically advanced economies. Venezuela’s now an example of the inherent pitfalls of the petro state. With this book, Richard Lourie provides a framework for understanding how Russia may be headed in the same direction.