I guess we really do need to spell it out. 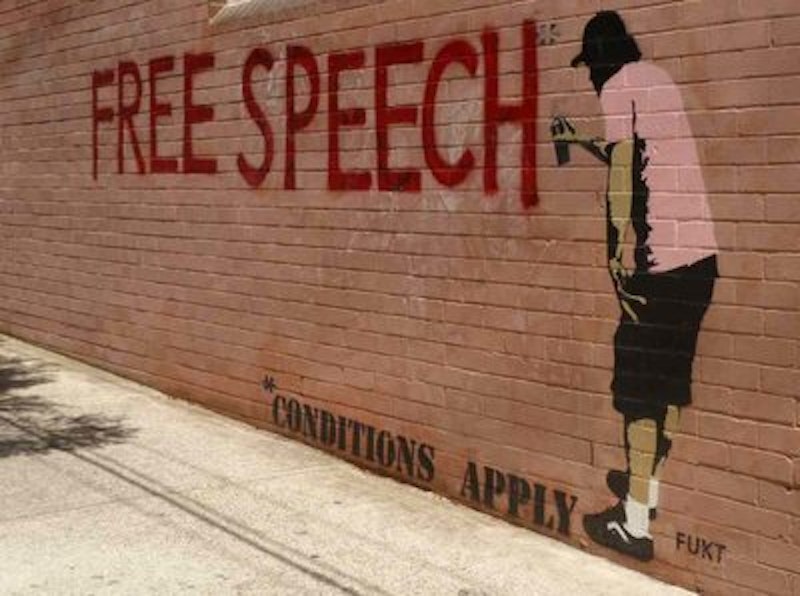 These are frightening times for freedom of speech. It doesn’t help that people across the political spectrum keep getting shriller and more impatient—and less nuanced—about everything. That trend makes it more difficult to describe in detail whatever philosophical principles we still have in common.

In particular, the sheer speed of political discourse these days, with arguments bubbling up on Twitter in the morning and being old hat by nightfall, makes reasoned discourse less likely. Luckily, that makes censorship harder, but it also, for some people of an authoritarian bent, makes censorship more tempting. They sense we are all, as it were, losing control. Too much chaos. Can’t get a handle on it. Panic mode.

Freakouts by major media (who could be setting a better example) don’t help. Take The Daily Beast, which reacted to that murder-by-car at a far-right rally in Charlottesville in part by denouncing a tweet that Trump sent out two days after the incident showing a cartoon of the unstoppable metaphorical “Trump Train.” The cartoon apparently reminded the free-associative folks at the trippy Daily Beast offices of the Charlottesville death and was thus terrifying, un-presidential, tantamount to violent incitement, etc.

At a time when, alarmingly, some people are seriously suggesting that the proper response to Charlottesville is to limit Americans’ rights to free speech and assembly, is Daily Beast helping with this petty nonsense? Wasn’t there a time not so long ago when the left and the media thought they were the ones who best understood irony and metaphor, or at least political cartoons? But maybe that time is gone along with the days when the right claimed to value civility and individualism.

It’s as if people on all sides now address each new datum by hurriedly asking, “Is there a way I could pretend to misunderstand this issue so as to create greater confusion while also adding something stupid to the conversation? There must be! No point in weighing in otherwise!” Or did the Daily Beast fear that an actual Trump Train was being constructed? If so, does Elon Musk have anything to do with it?

But regardless of how stupid you think the media are or how evil you think the likes of the far-right ralliers and Trump are, it’s neither stupidity nor evil per se that causes the law to spring into action. I hope we all still agree on that. We didn’t always take that view as a nation, I admit. A century ago, not only did we have long-standing laws against obscenity (mainly at the local level, with the federal government reluctant to interfere with them), we also for a time had laws based on the (not completely authoritarian) view that subversive groups who explicitly planned to overthrow the entire constitutional order and impose tyranny (fascist, communist, or otherwise) can be treated with as little respect as any other violent criminal conspiracy.

Today’s far-right and far-left ideologues might not fare well by that broad standard, but we’d be arresting far more people than just Antifa or alt-right rioters (think of all the radicals rounded up by Wilson’s government during World War I). In two years, though, we celebrate the 100th anniversary of a turning point in America’s understanding of free speech.

As Thomas Healy describes in his book The Great Dissent, Supreme Court justice Oliver Wendell Holmes penned an influential dissent in 1919 arguing against censorship laws on the grounds that the First Amendment exists not just to protect politically-valuable speech but to keep alive the whole marketplace of ideas, with no idea’s value certain unless it is continually subject to competition and argument. Freedom just for those ideas everyone agrees are correct is not much freedom at all. Ideas must be tested to be trusted. You wouldn’t want anyone in government declaring religious debates “over,” I’d imagine.

Holmes at the same time spelled out the rationale for extremely limited cases of punishing the speech of, say, a gangster who orders his men to kill you, or a demagogue who shouts at a cooperative mob, telling them to lynch you on the spot. Speech limited by law must pose a “clear and present danger” of violent, criminal action.

Rather than giving us a model for broader censorship, the fact that we already recognize this (very limited) exception to freedom of speech renders ridiculous the arguments heard from some leftist quarters over the past few weeks that unless we limit all speech sympathetic to fascism (and limit assembly by those who speak abstractly in favor of fascism) we’re denying people a right to self-defense against violence, thereby (goes the Antifa argument) leaving them no choice but to use non-state violence to silence evil voices.

That dangerous view elevates mob violence above rule of law by pretending law has never addressed these issues before—an easy argument to make if your audience is itself made up of riot-prone radicals who are completely ignorant of the law and its relatively rational track record, or who are just angry left-anarchists who don’t care about the rule of law at all.

These are the same sorts of people who think that if they punch neo-Nazis in the present day and get arrested for it, the mean police are behaving in exactly the same fashion as Nazi soldiers shooting at heroic Allied troops in Normandy, as I’ve complained before. No, when the police do their jobs right (and I’m not claiming they always do), they’re supposed to be protecting everyone from punches and other crimes. I don’t imagine leftists would always fare well if we started leaving it up to police discretion to decide who’s too reprehensible to deserve legal protection.

If it were only a few Antifa hoodlums themselves making anti-First Amendment arguments, I wouldn’t be too worried, but doubts about freedom of speech have spread rapidly in the past several weeks (it doesn’t take much). Dartmouth historian Mark Bray, despite his complaints that the nuances in his views are being ignored, is so far left and so manifestly sympathetic to anti-right-wing violence that it was a representative of the Southern Poverty Law Center who had to weigh in during one TV panel discussion with Bray to defend free speech for all, even the dreaded right wing, against violence. SPLC, for crying out loud!

Bray says non-violence simply isn’t enough, indeed that it’s a “privileged position” to claim you should sit there peacefully and allow fascist ideas to be spouted. His radically left-anarchist argument is that Antifa isn’t censoring so long as they’re doing the, uh, censoring themselves instead of deploying cops or government, who Antifa regards as useless and “infiltrated by white supremacy” anyway. “Fascism cannot be defeated through speech,” says the shockingly pessimistic Bray, so I guess fists must fly. It’s not censorship to his mind if it’s spontaneous and mobby.

This is almost an evil-twin version of a saner libertarian/mainstream argument, namely that stopping speech is not censorship in the full First Amendment-violating sense if it’s just a private institution telling you to go away and shut up (say, YouTube or Twitter using their increasingly broad and ambiguous criteria for silencing fringe users such as right-wingers and many sorts of seemingly-harmless conspiracy theorists—troubling but still within those companies’ rights so long as they don’t violate contracts with users). But libertarians merely mean, like Holmes, that your ideas must compete in the marketplace against other ideas and against editors or venue-owners who may not be interested in helping you spread your ideas. Libertarians are not suggesting that you be forcibly prevented from using other editors and venues, ones who want to help you spread your ideas.

Bray, Antifa, and bad governments like the idea of shutting you down at the source without pausing to ask who owns the relevant stage or printing press. They’re like people who refuse to change channels if they can instead track down the TV producers they dislike and beat them.

There was a time not so long ago when it would’ve been the ACLU, not SPLC, weighing in to denounce Bray’s horrific views, but the ACLU (reminding me a bit of the weasel words of the group PEN America when asked to defend the satirical magazine Charlie Hebdo) has suddenly started wrestling with competing values and blah blah blah, at precisely the time its full-throated, longstanding defense of the First Amendment is needed. Instead of just saying “Free speech for all,” the ACLU instead spat out the surprising, horrendous non-sequitur position that it will no longer defend the free speech rights of groups who carry guns when they rally.

I guess the ACLU still sort of likes the First Amendment, just not in combination with the Second Amendment. Pathetic.

Regardless of how cowardly the ACLU may become in the days ahead, though, speech is still the best remedy for bad speech. If, by contrast, someone actually threatens to use a gun offensively rather than defensively—or to throw the first punch—then, let the law, or even a self-defending citizen, use limited and proportional violence to restore the peace. Until then, you’re going to have to keep arguing, using your words, even when facing horrible jerks. You might learn something important in the process, like how to stop fascism without causing a bloodbath. In fact, you might end up stopping it in part by being a living model of peaceful interaction.

—Todd Seavey is the author of Libertarianism for Beginners. He writes for SpliceToday.com and can be found on Twitter at @ToddSeavey.