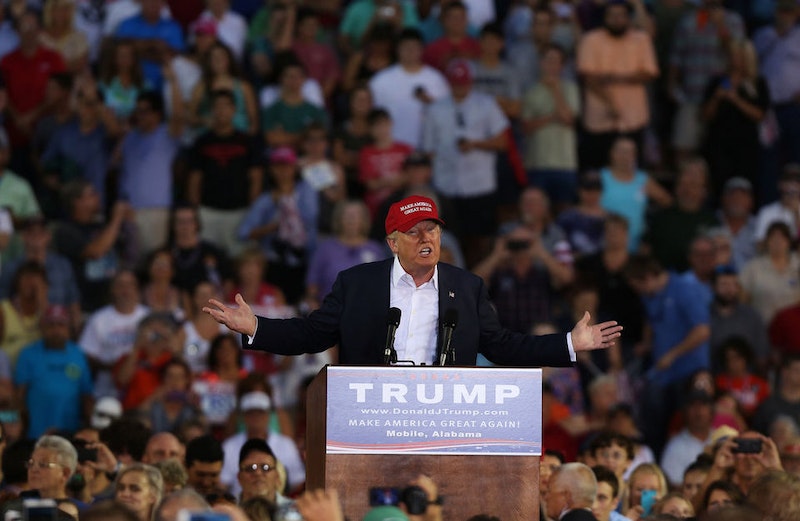 Donald Trump said he might draw 40,000 people to his rally in Mobile, Alabama. He didn't manage that, but the mayor's office says 30,000 showed up, and officially that means Trump had the biggest rally of any candidate this year. Bernie Sanders drew an estimated 27,500 people in Seattle, but now Trump is up by a couple thousand. The catch: Politico reports that police at the Trump rally said they wouldn't be doing a crowd estimate, and the mayor's office hasn't explained how it came up with its number. Reporters for Bloomberg, Politico and The Washington Post said the stadium looked half full. So did “several local outlets,” in the words of the Alabama news site AL.com. The stadium has a capacity of about 43,000, so half full would be well below Bernie's total.

Did Trump beat Bernie? I'm betting no. I haven't read any eyewitness reports that suggest 30,000, and the Post's Dave Weigel makes the point that Trump headed out of town awfully fast. A post-rally press conference had been planned, but none was held. Instead Trump and his party were rolling: six black Escalades with cronies inside, and a white Escalade for Trump. Weigel captures the scene: “On to the airport!” a security guard called “as Trump settled into the white-leather front seat.” The cars pulled out, and meanwhile the suckers in the VIP lounge gazed at “a blue curtain, state and national flags, and a podium”—an empty podium. All set up for nothing. Weigel suggests that Trump wanted to dodge any questions about attendance.

When Trump's campaign is asked about the crowd, they say to ask the mayor's office, which offers up its mysterious estimate of 30,000. I have no idea how Trump wrangled Mobile into saying what he wanted, but I bet that's what he did. He goes around talking about how he's the world's best negotiator and can negotiate himself anything that he wants. Well, here's an example. Trump says money moves the world and that he's got plenty. All right.

Bernie match-up. Trump hired a stadium and its staff, and the local Fox station pitched in to let people know how to get tickets and where they could park. The rally was a big-money operation, but at best it edged out the Seattle crowd Sanders drew on his weedy little budget. At best. Probably more people showed up for Sanders. The lesson I draw isn't that Sanders outshines Trump, but that the facts are pushing people in his direction. The system really has been screwing them, whereas illegal aliens haven't produced such devastation. Sanders gets the giant crowd just by standing in one spot and telling people what he's going to talk about. Trump has to huff and puff with the help of three news channels, and then (I bet) he jiggers with the right elements to get himself the crowd estimate he wants.

That Trump! Trump reels off the networks that are showing the event. First comes Fox. “I like Fox,” Trump says indulgently, nonchalant. Tolerance is the idea, not enthusiasm. The crowd gives a few cheers. Then comes CNN, which produces little from the crowd. “Ah,” Trump says in response to the flatness, not dissatisfied.

The man discusses his sense of mission. “I want to put that energy—” he says dreamily, and he breaks off. Then he presses on, bursts on. His head sinks between his shoulders. “Whatever the hell kind of energy it is!” he says, wondering now. He wags his hands, or really his torso. I mean that, on one side of his head, hand and elbow form an angle, and on the other side, hand and elbow form another angle, and these two angles rock. One goes high, the other low, back and forth. They do it as Trump clocks through the possibilities of what is this thing, this him, this Trump.

“I don't know if it's screwed up, if it's good, if it's genius, if it's... what,” he says. “Whatever it is! I know how to do things.” In between the see-sawing angles, there's his head with the red hat that says “Make America Great Again.”

He talks about coming from smart people. “They used to say Secretariat doesn't produce slow horses.” A thought occurs to him. “Actually,” he says, shrugging, “ Secretariat wasn't one of the best. If you want to know the truth. But in theory they were right.” Trump sees being alive as a chance to size up how other entities—any: a person, a company, a horse—are making out when it comes to career progress. How are they doing?  How will they do? If dead (like Secretariat), how did they do? He decides, and if his mouth is open, he will decide sooner and not later. Twenty thousand people in 90-degree heat get to hear about Secretariat; he gives them the lowdown.