"Cuckservative" Is the New "RINO," Only Worse 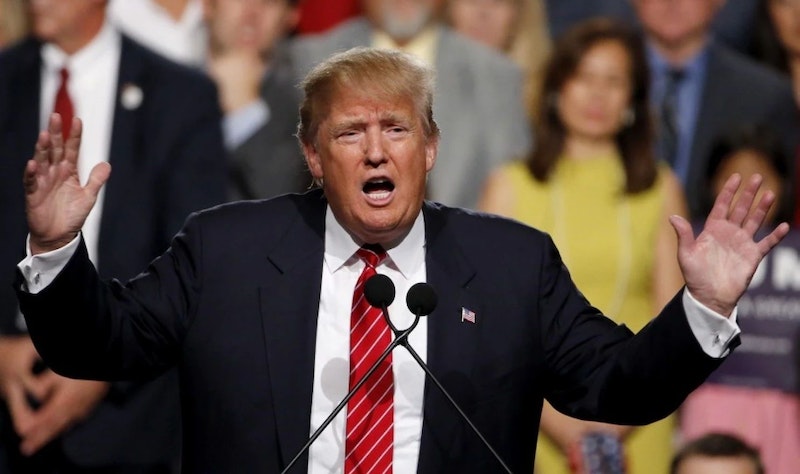 The Republican Party has found a new way to tear itself apart from within, and it's coinciding with the unsettling rise of Donald Trump, the brash and vulgar voice of the GOP's id. More moderate Republicans, already disconcerted by the populist demagogue's stunning success on the stump so far, now face the added indignity of being labeled a "cuckservative" by the uncompromising noisemakers on the far-right. People like Jeb Bush, for example.

Porn aside, there is a definite racial component to "cuckservative." Among the hardliners I chatted with online—call them "anti-cucks"—there was a general consensus that the "cucks" were not standing up for "their own," meaning white people. It’s no coincidence that the slur is often aimed at Republicans perceived as wishy-washy on securing the Southern border and deporting "illegals." "They’re cucks because they take pride in degradation and defeat," is how Gregory Hood, writing for the race-focused American Renaissance put it. Hood continues: "They are like a man who tries to appeal to a woman through acts of submission; they inspire not desire but disgust."

At the root of the cuckservative phenomenon, you'll find a dose of white power philosophy liberally seasoned with some sexual degradation imagery. White supremacist types making psychosexual putdowns of their fellow GOPers can only bring comfort to the Democrats, as if the Trump spectacle wasn't producing enough anxiety already.

The anti-cuck—that proud, flag waving, true patriot—sees himself (cuckservative is mainly a male word) as the alpha male. Possessing the strength to stand watch over the perilous state of racial balance in the U.S., the burden falls on him to preserve his domain from the beta male pantywaists who are too willing to pave the way for the "brown invasion." Unfamiliar words such as "ethno-masochism" are bandied about in such circles, as are tweets such as this: "#Cuckservatives LOVE proving they're not racist by pandering to blacks and adopting black children. Plenty of examples."

The anti-cucks are a flinty lot. Possessing what appear to be bona fide conservative credentials does not immunize you from their attacks. Kurt Schlichter was personally recruited by Andrew Breitbart in 2009 to write for one of his publications. He affects a persona of blustery machismo, and views liberals pretty much as bed-wetting bronies, but the anti-cuck is not impressed. Schlichter was an Army Colonel in Kosovo during the time of American military involvement, following orders and taking the side of Muslims over the white Serbians. This makes him a cuckservative, according to some online arbiters. Sample tweet: "If @realDonaldTrump is exploiting us, imagine what #cuckservative @KurtSchlichter, who helped Muslims slaughter Serbs, is doing."

Now if Schlichter can be called a cuckservative, nobody in the Republican Party is safe. One mistake—obeying orders and "fighting for Muslims"—and the anti-cucks open fire on you. Interestingly enough, Jews seem to be the one group that gets a pass. They’ve not been emasculated because, as an anti-cuck tweeted at me, "Virtually all Jews, secular, orthodox, liberal or conservative still work for their ethnic group."

When I asked an anti-cuck on twitter who the cuckservative GOP presidential candidates were, he replied: "You're not too bright are you? Every #GOP candidate except #Trump.” Build the wall, boot them out en masse, and call them rapists or you're a cuckservative. Anti-cucks are very exclusive.

The anti-cucks are on a roll now. Fuck Mitt Romney. They've finally found their guy, and he tells it like it is. All the cuckservatives can go to hell. They can savor the smell of another man's cologne on their wife, and get used to watching her hang up the phone quickly when they walk into the room. While she's suddenly working longer hours or taking a lot of extra business trips, the real men of this country will be making America great again while their women wait home alone for their return.