The faux-populist would fare no better than Goldwater in ’64. 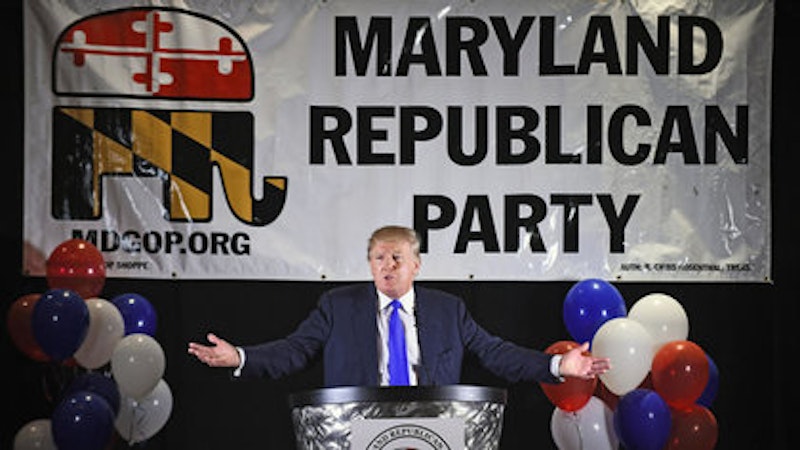 If Donald Trump is elected president and gets to enforce his war on illegal immigrants, Maryland’s population of 5.8 million would shrink by an estimated 250,000 and the state’s budget would save about $1.7 billion a year that its spends as host to Trump’s unwelcome guests.

Those arbitrary figures, and there’s no other way to describe them, are from two disparate sources, one usually reliable, the other with a single-issue chip on its shoulder. The population number is from the Pew Research, which conducted a state-by-state head-count to approximate the number of illegal immigrants within each state’s boarders. And the dollar figure is from the Federation for American Immigration Reform, FAIR, which is anything but.

Maryland’s share of undocumented immigrants is among Pew’s estimated 11.2 people in America illegally, but others peg the figure at closer to 20 million though nobody really knows. FAIR claims 5.7 percent of children in Maryland’s schools, kindergarten through 12th grade, have at least one illegal parent. Educating those kids, according to FAIR, costs Maryland taxpayers $1.7 billion annually. (Contrary to widespread assumptions, undocumented residents do not qualify for entitlements such as welfare, Medicaid, Social Security and other safety net benefits.)

FAIR, according to its website, wants to halt most immigration while a national debate takes place on the issue (isn’t that what this campaign is about?). Trump wants to deport all illegals in a kind of police-state roundup and then readmit only the desirables who want to return. That way he’ll rid the country of gangs, rapists, murderers, sodomites and anchor babies—all Trumps words. The columnist George Will once mused that to deport all those who are here illegally would require a line of buses, bumper-to-bumper, from the Mexican border to Seattle, Washington.

The appeal of Trump’s statements is their imprecision. Rather than policy pronouncements they are code words that unleash the nativist fury of what’s on people’s minds rather than what he can or will do as president. He has mastered not only the art of the deal but also the skill of connectivity. It’s also known as pandering.

“The Bible is my favorite book.” “I understand these guys.” “We’re going to have plenty of time to talk about it.” “I love Christmas.” “We’ll try and work something out.” “We’re just going to see what happens.” “I like leverage.” “I just don’t want to announce it yet.” “But the good ones—of which there are many—I want to expedite it so they can come back in legally.” “I love Mexicans.” “I know how to build a wall.” “I love Fox News.” “We can make this country great again.” “Politicians are stupid.” “I’ll call Carl Ichan.” “I should take his [the lobbyist’s] money then turn around and screw him.”

When Trump talks about anchor babies, children born in America to an illegal parent(s), he says “they have to go” even though they are birthright citizens under the Constitution’s 14th Amendment which is based on English common law that is centuries older than America. One report, attributed only to watchdog groups, puts the number at 400,000 a year. There are two bills in Congress, one each in the House and Senate, that would repeal the 14th Amendment through a constitutional convention which requires legislative authorization from 38 states. Good luck with that. (Trump claims there is a statutory shortcut to repeal the 14th Amendment. There isn’t.)

Trump has become a force of nature. He’s put the Republican Party in a maze with no exit. He’s forced others among his 16 rivals—Jeb Bush, Ted Cruz, Scott Walker, Bobby Jindal, Mike Huckabee—to mimic his extreme positions on immigration at a time when the GOP needs at least 35-40 percent of the Hispanic vote to be competitive for the presidency (Mitt Romney got 27 percent in 2012). Trump’s brand of America First rhetoric might appeal to the Republican base for primary elections—he’s ahead by double digits in every recent poll—but such talk will be a certain turn-off in the November general.

Maryland has always been an open if not entirely hospitable place for immigrants, from the arrival of the Ark and the Dove at St. Clement’s Island to the repeal just last week of the embarrassing English-only language requirement in Frederick County. The Acts of Toleration, dating back to the 17th Century, were declaimed in Maryland with the ironic twist that they landed the state’s first Jew, Jacob Lumbrozo, in jail for blaspheming on the Sabbath. The Acts of Toleration applied only to Christians.

And later, with the coming and going of kings and governors, the Huguenots drove the Catholic settlers from Southern Maryland up into the hills of Frederick County where, in 1824, a Catholic legislator, Thomas Kennedy, was defeated for sponsoring a bill that would have given Jews the right to vote—at the time the so-called “Jew bill.”

Blacks have always been a strong presence in Maryland, even the slaves who accompanied the Jesuit priest, Rev. Andrew White, who, seeking religious freedom from English tyrants, said the first mass in Maryland upon his arrival at St. Clement’s. Today, blacks make up about 33 percent of Maryland’s population, the largest outside the Deep South. Public accommodations in Maryland were opened to blacks through legislation in 1964.

More recently, Maryland was among the few states to adopt its own version of the Dream Act, which extended education benefits to children of undocumented immigrants. And then-Gov. Martin O’Malley (D) declared Maryland a sanctuary state, among others, a protective shield whereby the state refused to cooperate in identifying and relinquishing known illegals to the federal government. Gov. Larry Hogan (R) recently rescinded that policy. O’Malley also agreed to accept and house children who had illegally entered the country until their cases were resolved by immigration officials.

Baltimore Mayor Stephanie-Rawlings Blake, in her early years in office, announced that immigrants, of whatever nomenclature or description, were welcome in Baltimore as inclusive in her program to repopulate the city by at least 10,000 new families. East Baltimore, once the provincial territory of Italians, Poles, Germans and Greeks, now resembles a pocket-sized United Nations where more than 30 languages and dialects float lyrically through the polyglot neighborhoods and a menu of authentic new tastes and flavors perfume the air.

As if to validate the immigrant presence, Maryland Congressional officials are forced each year to petition the federal government for an increase in the quota of legal workers who come from Mexico every season to process crab meat in the Eastern Shore packing houses, proving once again that America relies on immigrant labor to do its dirty work.

Trump’s métier is name-calling. And O’Malley has not escaped Trump’s switchblade tongue for exhibiting what he considers political correctness. Trump said in a Fox News interview that O’Malley behaved “like a disgusting, little, weak, pathetic baby,” when he apologized for remarks he made before a gathering of Netroots Nation.

O’Malley had said in a speech to group “black lives matter, white lives matter, all lives matter.” He later said the remark was insensitive to the black moment. But Trump’s reaction and his runaway rhetoric recall a parody line from the 1964 campaign of another conservative Republican, Barry Goldwater: “In your heart you know he’s white.”