The Right believes It, Left thinks it's the new spirit cooking. 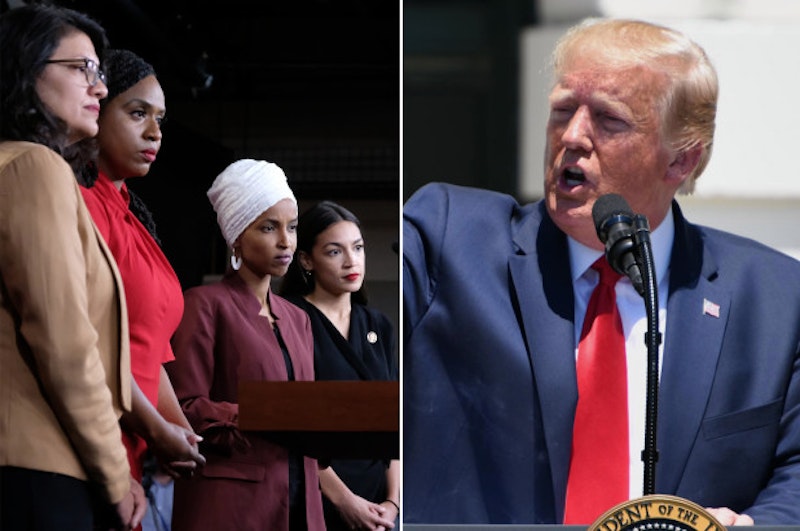 Donald Trump caught some flak in his all-out offensive against the controversial coterie of Democratic congresswomen known as “The Squad” when people at his campaign rally in North Carolina chanted—referring to Minnesota's Ilhan Omar—”Send her back.” A handful of worried Republicans expressed concern over that un-American sentiment, but it wasn't enough to stop the President from repeating the long-standing rumor on the right that Omar once married her brother for purposes of immigration fraud.

Trump would later disavow those chants by claiming he didn't like them, meaning that a panicked Ivanka had called him with a heads-up. Hard-line conservatives might’ve fretted this concession made him look weak, but his dogged pursuit of Omar showed them that he hadn't turned into a complete powder puff. On the other hand, the Democrats and the media got busy protesting that the president's allegation was the new #pizzagate/birtherism. The full truth of the matter, caught in the partisan crossfire, was the first casualty.

Trump, a master of innuendo, left himself some room by saying that he'd “heard” these rumors but didn't know anything about them, thus elevating the story beyond the Internet to the general public. If he's going to be forced to rebuke his people, the chanters, then he's going to find a way to compensate, even if it falls well outside of the traditional boundaries of presidential behavior. Do people still even remember what they are?

The claim about Ilhan Omar's alleged marriage to her brother is unproven. It started with an anonymous allegation made on an Internet forum used by Somalis called Somali Spot, but no definitive evidence has ever been produced. To many on the Democratic side of the fence, including Will Sommer of the Daily Beast, this means the case is closed—just another conspiracy theory to be put to rest, like the one about Hillary Clinton's posse operating a pedophile ring out of a Washington D.C. pizza parlor basement.

Sommer responded: “He demonstrated the remarkable degree to which even the most far-off corners of the right-wing internet can launch unproven, anonymous claims into the national political discourse.” Does the writer consider the Minneapolis Star Tribune, Omar's hometown newspaper, to be on par with 4chan? The newspaper ran an article on June 23 with this headline: “New documents revisit questions about Rep. Ilhan Omar's marriage history.”

A cynic, or a conservative, might be inclined to think the writer omitted this inconvenient fact because it didn't fit his narrative. The Daily Beast is politically inclined to protect triple minorities—female, black, and Muslim—like Omar. The Star Tribune’s a mainstream publication, and it knows much more about its state’s new congresswoman than Sommer does. Perhaps there's a reason its editors decided to run that article. They've also reported on Omar's continuing struggles over the years getting along with the Jewish community in her state, due to her perceived anti-Semitism. Somalia’s one of the more anti-Semitic countries on earth, and you don't magically shake that prejudice by moving to another country.

Anthony Fisher, writing for Business Insider, provides a more balanced account of the controversy that doesn't rely solely on associating it with sketchy political operatives. He references the Star Tribune article while still shooting down the hypothesis that Omar married her brother due to lack of evidence.

Still, there are some question marks remaining. As a state probe of campaign finance violations revealed, why did Rep. Omar file federal taxes in 2014 and 2015 with her current husband, Ahmed Hirsi, while she was still legally married to, but separated from, Ahmed Nur Said Elmi, her former husband and alleged brother? Ilhan Omar has not answered this question.

The Star Tribune: “Although she has legally corrected the discrepancy, she has declined to say anything about how or why it happened.” To legally correct it, the investigation found that Omar illegally paid a lawyer with campaign funds. Before Will Sommer and the rest of the media lump this matter in with #pizzagate, they need to find out why Omar would file such a tax return, even if Elmi is not her brother. The Star Tribune searched public records, but “could neither conclusively confirm nor rebut the allegation that he [Elmi] is Omar’s sibling.” They also sent Omar a list of questions and a request to talk to her siblings and father, which she declined. Omar’s relatives could be helpful in clarifying the matter, but they've maintained their silence about her marriage to Elmi, despite the Star Tribune requesting that Omar make her family available for the June story.

Ilhan Omar has tweeted that the allegations are the provenance of “fake journalists on bigoted blogs.” Her spokesman, Jeremy Slevin, said, “Whether by colluding with right-wing outlets to go after Muslim elected officials or hounding family members, legitimate media outlets have a responsibility not to fan the flames of hate.” Legitimate journalists also have a responsibility not to be scared off by insinuations that their investigations are motivated by a desire to persecute Muslims when they're just doing their job.

Trump's playing hardball against Ilhan Omar now. His instincts have told him she's the Squad member to single out, which is understandable, given her track record. She’ll face increased pressure to defend herself. Until the outspoken congresswoman becomes a little more cooperative with media such as the Minneapolis Star Tribune, this matter won't be laid to rest, despite what the Daily Beast tells us. Trump will make sure of that.