Art and Capitalism in Bentonville

There’s a lot to love. 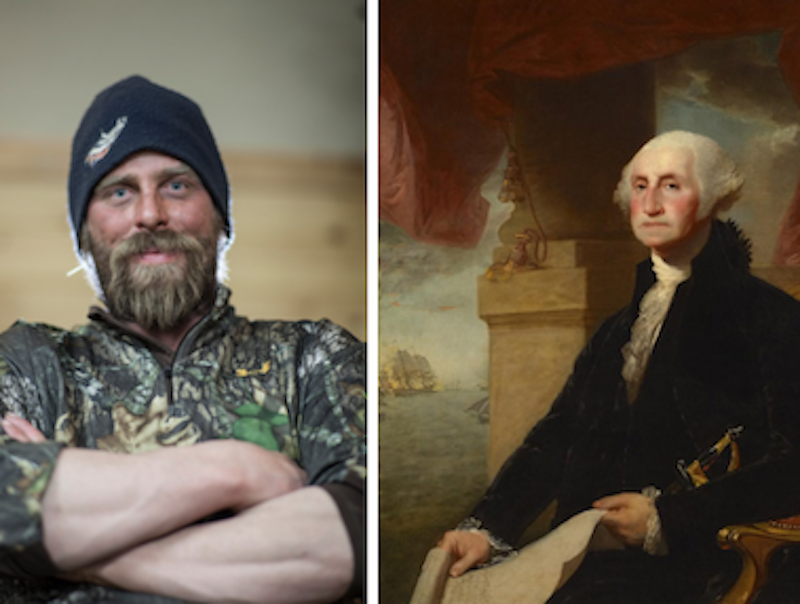 Bentonville Arkansas, a small town in the Ozarks where I spent a few days in May, raises the question of the relation of art and capitalism in a pointed way. It's the home of the Crystal Bridges Museum of American Art. Endowed by a scion of the Walton family, owners of Walmart (which is headquartered in the town), it displays in a beautiful space an excellent history of American art, from Gilbert Stuart to Kerry James Marshall. And we stayed nearby in the 21c Museum Hotel, which hosts a collection of edgy contemporary art. The exhibition there was "The Future is Female," and it featured a selection of fairly radical feminist work, including items b Jenny Holzer and Kiki Smith. In a hotel. In Bentonville, where the pleasant, extremely American little town's central square features a Confederate memorial in pristine condition and the Walmart Museum.

The intersection of art and capitalism is one of the most fraught little zones or questions of the culture over the last century and a half. Many on the political left have decried the "commodification" of art, which is easy to portray as ridiculous and destructive, as when a Jeff Koons bunny sells for $90 million. The critical theorist Theodor Adorno, for example, devoted a whole career to documenting the deleterious effects, and he thought of the arts in capitalism as devices for placating or distracting or corrupting people on behalf of the ruling class. In capitalism, Adorno wrote, “everything has value only in so far as it can be exchanged, not in so far as it is something in itself. For consumers the use value of art, its essence, is a fetish… which they mistake for the merit of works of art." The sociologist Pierre Bourdieu showed how closely people's taste mirrors their class identity, with anxious middle-class museumgoers trying to emulate the elite taste of their capitalist overlords.

The argument might run the other way, however. Astonishingly, Adorno's great example of the corrupting influence of capitalism on the arts was jazz. And it's true that Louis Armstrong, for example, was a commercial artist from the outset of his career. He was playing paying gigs. He was making recordings for commercial record companies and he hoped that people bought them. This was not a barrier to his artistry; it was essential to it. His music would’ve been inconceivable if the US government, for example, had been the only patron of the arts in his lifetime. The commercial transaction made the work into a dialogue with its audience: Armstrong wanted to give people what they wanted to hear; he wanted to please them, even as he also wanted to reform their tastes. Applied in the arts, the law of supply and demand could ideally make the art dialogical, or make the people experiencing the art (as "consumers") active in the creation of the experience. Of course, as Adorno would insist, taste can be manipulated, and he thought that everyone's taste (except perhaps his own and that of his fellow members of the intelligentsia) was in fact manipulated.

But if you really thought about all the popular art and music and film, for example, produced for commercial reasons or in a commercial context—from detective fiction to Hollywood movies to classic cartoons to hip-hop music—you'd have to say that a lot of it is wonderful. Also, a lot of it has fed back into "high art": in Warhol's work, for example, or in many a symphony incorporating elements of jazz or folk music. A lot of it sucks, as well, but no system of art patronage—by the Church, for example, or the Spanish royal family, or the propaganda ministry—is free of mediocrity, banality, or formula. Or manipulation.

Crystal Bridges is one spot where the intersection of art and capitalism definitely doesn’t suck aesthetically, or in which commodity fetishism coincides with aesthetic excellence. The building—designed by Moshe Safdie and exquisitely placed in a green Ozark ravine—interacts tastefully with its site, and provides a beautiful S-shaped frame particularly for paintings. The collection includes distinguished pieces from the early republic (the Hudson River School landscape painters never looked so good), masterpieces of American modernism, and a well-chosen collection of post-modern and contemporary works. The modernism, including some of the greatest works by people like Georgia O'Keeffe, Arthur Dove, and Marsden Hartley, comes in part from an agreement between the museum and historically-black Fisk University in Nashville, which housed the great Alfred Stieglitz collection of art for decades before selling a half share to Crystal Bridges.

There’s a lot to love. If you thought that Walmart people must have bad taste, for example, Alice Walton has proven you wrong: even Theodor Adorno would be obliged to admit as much. Furthermore, there’s no reason all the great art should be on the coasts or in the biggest cities. All sorts of people were visiting Crystal Bridges when I was there, from Alice Walton herself—who was, seriously, strolling around the grounds with Deepak Chopra—to middle-American guys outfitted by Cabelas. As you enter the galleries, you're liable to be riveted by an encounter between George Washington—stately and inanimate in the familiar Stuart rendering—and a video portrait by Susie J. Lee of just this sort of American guy (Johnny), staring from a framed flat screen, wearing UnderArmour camo and blinking like a picture at Hogwarts.

Crystal Bridges stages itself with the same progressive rhetoric that you'll find in the museums in New York and LA these days. All the didactic materials are bilingual. Themes of racial and gender oppression are centralized, even when they make the historical art problematic. In the contemporary section, works by Black, Latinx, and female artists predominate. You might think all this would be a source of loathing or ridicule for the people of northwest Arkansas, eastern Oklahoma, and southwest Missouri. Instead, by all accounts, the institution is beloved. And highly trafficked: there was a constant stream of school groups that weekend in mid-May. 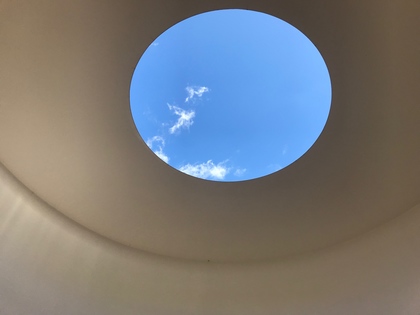 This takes money, obviously, which was quietly visible everywhere, from grounds maintenance to the excellent but somewhat pricey restaurant. A Usonian house by Frank Lloyd Wright was moved to Bentonville from New Jersey. There’s a James Turrell "skyspace" on the grounds as well: a stone structure that is a naked-eye observatory to the sky. Turrell's work is as beautiful and profound as anything in recent art, and it was in this structure that I got a gander at Walton and Chopra, who (like me) seemed to be having a spiritual/aesthetic experience. Walton has used Walmart money to create an impression of understated tastefulness, but symptoms of the billions are everywhere. In this case, I think, our primary response ought to be gratitude: admission is free, and the art is wonderful.

Perhaps the concept of the "museum hotel" is more problematic as an intersection of art and commerce. I was very happy to be staying at the 21c, though it wasn't cheap. It was an excellent hotel in every respect: clean, with an attentive staff, and extremely carefully-chosen furnishings. And the art—there was a surprising amount, of surprising quality, in surprisingly large white-cube exhibition spaces—was better than I could’ve expected, and more politically challenging. There was a photograph of a projection on a building by Jenny Holzer, "I am afraid of the ones in power," and a separate "mature content" room with, among other things, a map of female reproductive organs etched in pink neon and equipped with boxing gloves, by Zoë Buckman. 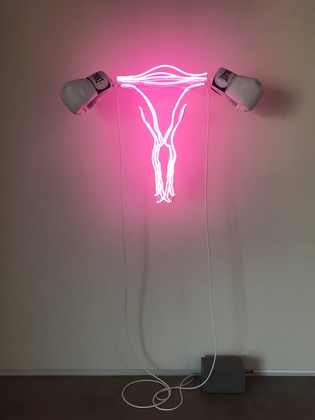 Now, just as there’s no reason that all the art should be in New York, there’s no reason it should all be trapped in museums. I enjoyed moving through it on the way in and out: it made life a bit more interesting, and it definitely beats the usual hotel crap, which is so banal that you don't even see it. For a few days, it enhanced my quality of life just a bit. And people were definitely focusing on the art: both guests and visitors (and even staff on break) parked themselves in front of various works, pointing at interesting bits, talking to one another about what was going on.

But specifically with regard to the political work in the show, the effect was attenuated by the context. It’s hard not to see anything in a hotel lobby—even a neon vulva—as denatured or generic. It’s hard not to see it as pandering to the guests, as obviously uncontroversial, or as anything other than pretty. In some ways, the context overwhelmed each work, so that they all came out yielding a similar effect. There’s a long distance between a feminist political provocation and a pleasant decorative element in a hotel bar, after all. I wasn't expecting this necessarily, but all the work took on something of the latter quality at the 21c, no matter how it began or what it meant. Underlying my response to everything was a sort of knowledge: if it's here, it must be safe. If it's here, it must be helping people make money. Or even: if it's here, it's not really art.

The store sells Jeff Koons memorabilia and art books as well as toothbrushes and Bentonville t-shirts. When you turn on your television at a 21c hotel, of which there are about 10 so far, including in Nashville, Oklahoma City, and Durham NC, you get videos of the chain's owner Steve Wilson, trolling art fairs. He starts pointing at things: "I like that one! Would you take 50k?" Sort of like shopping at Walmart, but with haggling. He seems to buy all sorts of things, though one group of artists, presenting an installation allegedly designed to trap living birds, paint them different colors, and then release them, just flat refuses to sell, on the grounds (one supposes) that the enterprise is too commercial and that the art or the artist will be debased or devalued in this framework.

I didn't really know how to feel about all this, as I was grateful to be passing constantly through some fine or lovely art (as well as some not quite so fine or lovely), but experienced it as more trivializing and exploitive each time through. I think that the effects of capitalism on art are similarly multivalent and ambiguous. These effects are certainly not all baleful, and at its best art in capitalism does what art ought to do: make experiences of beauty and meaning accessible, and respond to what people think they want or need in their environments. At its worst, it buys and it denatures; it provides empty pleasures or manipulations designed to make you spend money. All of that and more is on display in Bentonville.

But at least the effects aremultivalent and ambiguous, and the aesthetic products come from many different producers and sorts of producers. If the alternative is the art of socialism—government-approved and presenting a single coherent ideology—then I’m going to opt for capitalism every time. But what I'd really want is art that is less beholden overall to the largest structures of power, an anarchist art trickling out from an underground.

But that, too, is compatible with capitalism, and for that matter with socialism: as structures of power appropriate and make use of even subversive art, new forms of subversion are required, and every aesthetic power structure produces resistant zones where the real new art is hiding. Then it co-opts the art that’s emerging from these zones. But that only forces the anarchists to get more extreme and more human: harder for the institutions and powerful patrons to absorb. There's no real stopping the co-optation, which might be driving Jenny Holzer or even the late Arthur Dove mental right now. But there's also no stopping new forms of resistance from emerging.