Josh Hawley Doesn't Want Me In His Nation

Populist anti-Semitism finds another spokesman on the right. 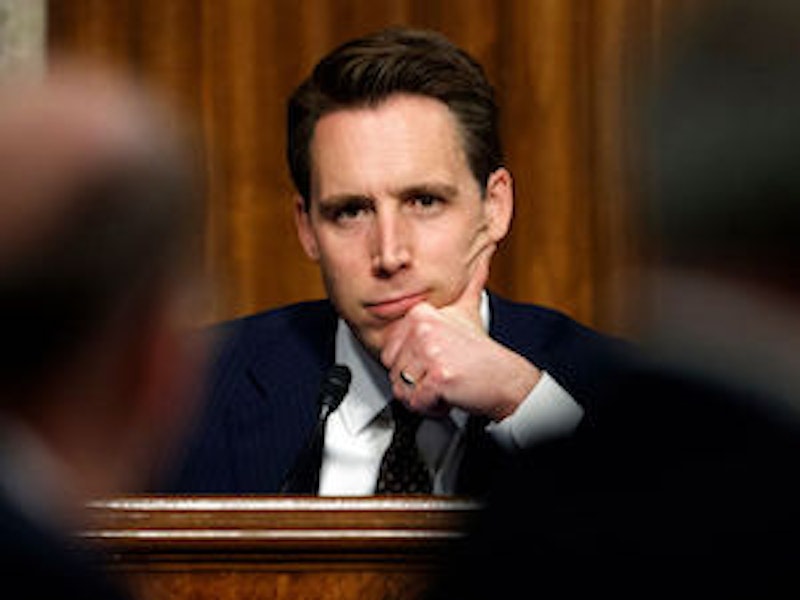 Conservatives in the United States insist that they hate anti-Semitism and are friends to Jewish people. Missouri Sen. Josh Hawley's recent speech at the National Conservatism Conference shows how hollow those claims are. Hawley's speech was a call for nationalist resistance against shadowy, inimical “citizens of the world” who he says are harming America.

"The Republican tradition has always viewed self-government as a project bound to a particular place, practiced by citizens loyal to that place and loyal to the way of life they share together," Hawley asserted. That "way of life" is threatened by what Hawley refers to as "the cosmopolitan consensus" which believes that "globalization is a moral imperative." The people of "middle America" are suffering while the "cosmopolitan elite" dance in joy.

The problem isn't that Hawley is concerned about trade policy. It’s that his speech is so saturated with racist and anti-Semitic dog whistles that it could be used as a cure for canine deafness. The phrase "defending our way of life" was used by Confederates to justify the fight to preserve slavery; it's an open conflation of traditional values and white supremacy. The "cosmopolitan elites" marinated in "globalization" sound uncomfortably like "rootless cosmopolitans"—Stalin's term for Jews, whom he believed were insufficiently patriotic because of their dangerous, treasonous transnational commitments.

Hawley’s comments underline the ways in which calls for nationalist purification and a return to a coherent nationalist identity are often predicated on excluding Jewish people. Hitler saw Jewish people as eternal immigrants—he compared Jews to vermin infiltrating and corrupting the noble German polity. Just as Trump believes a Mexican-American judge is always really Mexican, and just as the United States decided during World War II that Japanese-Americans were actually loyal first to Japan, so Nazi Germany saw Jews as un-German betrayers, committed to a cosmopolitan community of evil.

In referencing globalists and cosmopolitans, Hawley treads on the edge, and over the edge, of far-right conspiracy theories. These conspiracy theories have a body count. In 2018, the far right pushed the lie that George Soros, a billionaire Holocaust survivor and Democratic donor, was funding refugee caravans at the Southern U.S. border. The anti-Soros conspiracy theories—which Trump cosigned—inspired the white nationalist terrorist who targeted Tree of Life synagogue in Pittsburgh. The Tree of Life congregants were active in immigrant aid; the shooter saw them as part of a Jewish conspiracy to undermine the whiteness of America. He killed 13 people.

Hawley insisted that his speech was not anti-Semitic. As proof, he said on Twitter that he was at a conference organized by a Jewish person and there were Jews in the audience. "I know Jewish people" is never an impressive counter to accusations of bigotry, so Hawley added what he saw as a cincher; he is, he said, "an ardent advocate of the state of Israel and the Jewish people."

But advocating for the state of Israel is not necessarily advocating for Jewish people, and Hawley's slippage between the two underlines why his words put Jews in the United States at risk. Israel is organized as a nation state for Jewish people. For nationalists like Hawley, Jews belong in Israel; it's their home. The correlate is that Jews don't belong here, in America. As long as Jews are in their place, over there, supporting the Islamaphobic and far right Netanyahu government, they're acceptable. But as soon as they start living in America and voting against Republicans—well. Then they're evil cosmopolitan elites who must be erased, one way or the other.

American Jews are, for the most part, thoroughly assimilated. But Jews in Germany in the 1930s were thoroughly assimilated as well. It didn't matter then, and it didn't matter for the people killed at Tree of Life either. The idea of the Jewish diaspora is in part a utopian vision. From the perspective of the diaspora, our neighbors are both close by and far-flung; we live in both a local and a global community. The alternative is fascism: a narrow nationhood, defined by paranoia and hatred. Such a nation, as Hawley reminds us, has not historically been a safe place for Jewish people.