The Histrionics of Trump are Pure Pro Wrestling

He’s saying what the likes of Scott Walker are afraid to. 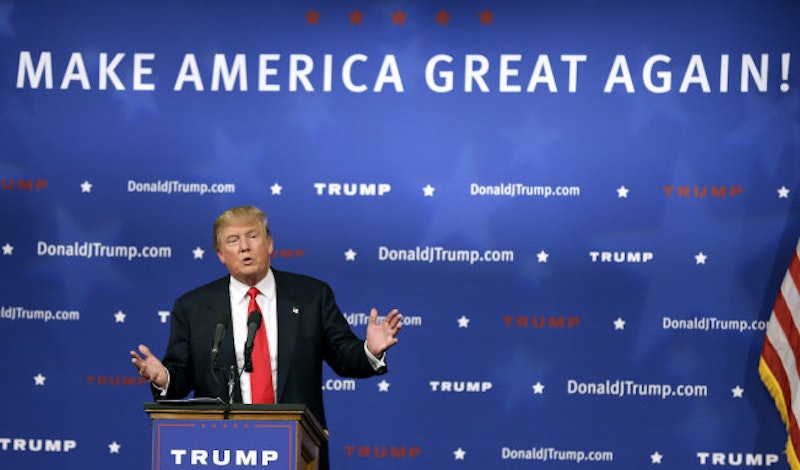 I’m baffled by how many individuals and companies—major and minor newspapers, magazines, media critics, commentators and Facebook friends—are taking Donald Trump’s bid for the Republican presidential nomination seriously. How can you take anything he says at face value? It’s impossible. He’s playing the heel; it’s pro-wrestling. I salute you, Mr. Trump, for navigating the game of presidential politics without any of the pretensions or nuanced bigotry that are standard for any “serious candidate.” He’s Ann Coulter or Ariel Pink, but with major money in the banks. He’s leading in some polls, soaking up pixels ink in every paper and publication covering the race in its preliminary stages. I doubt his surge is over—I think Trump’s popularity will only continue to grow as the summer winds down and 2016 approaches. This is a great thing for our country.

Theories abound that Trump is a mole working for Hillary Clinton, a kamikaze candidate with no shame who will do anything for the right price—even sabotaging the GOP field and flummoxing its number of awful aspirants who are actually evil, offensive, and believe what they say (Scott Walker, Jeb Bush, Marco Rubio, Bobby Jindal, Rick Perry). Alternatively, Trump is a mole hired by the GOP to make their eventual nominee seem rational in comparison. Fifteen months in advance of the election, it’s impossible to tell what’s going to happen—anything goes. Hillary’s Tales from the Crypt plastic smile betrays a desperation everyone knows is there. I wouldn’t be surprised she turns into dust instantaneously if her birthright nomination is lost to Bernie Sanders or gosh, O’Malley?

Trump is doing the Lord’s work, and I applaud him for insisting John McCain is not a war hero “because he was captured.” This is major-league trolling—as if declaring a personal vendetta against an entire country that we happen to share a border with wasn’t enough. El Chapo has a hit out on Trump for claiming that illegal immigrants from Mexico are not only taking jobs away from Americans, but that they’re raping our women and killing our children. Scorched earth. This is political theater of the highest order, further proof that presidential races are exactly the same as pro-wrestling. And then there’s Rupert Murdoch, lamenting that Trump is “embarrassing” himself, his country, and his party, when Murdoch is one of the worst people alive.

Trump is making explicit what his “serious” rivals in the race stick in subtext: that minorities are out to rape white women, that lip service is all we ever give veterans, that Obama’s birth certificate is fake. Racism, sexism, “supporting the troops” and then promptly sweeping their ravaged and legless bodies under the rug—these are all tenets of the Republican party, and all have come up in every election for decades. By exaggerating and explicitly stating what scum like the Bushes, Perry and Walker slip into subtext and code, he’s destroying their platform and exciting the brainless base they need to win. Who knows if this McCain diss will alienate poor white voters who probably know dozens of people who lost limbs and lives in the Middle East. I doubt it. The more anti-black, anti-Mexican, anti-women histrionics Trump spews, the better. Even if he’s a mole for the GOP, the Democratic nominee will have a lot of material to work with from Trump’s exegesis.