One of the main things you need is a society in which people respect their own unhappiness. 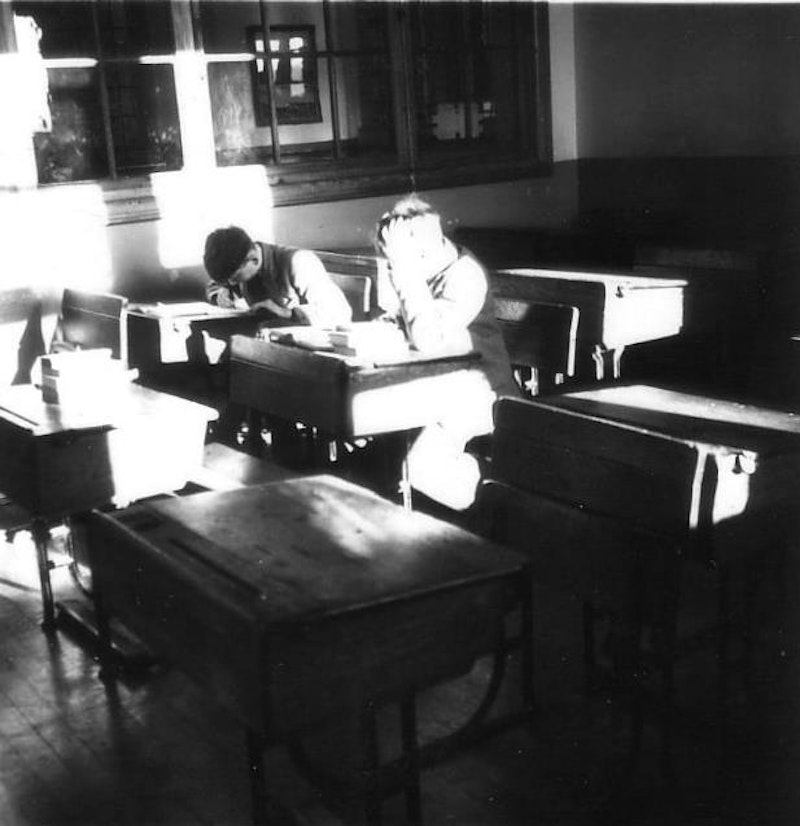 I check Matthew Yglesias’ blog semi-regularly. He’s smart and a decent writer, and he hews close to the progressive party line. I’m a progressive myself, so that works out okay, and I happily click over to his place to find out why the United States isn’t as good as Scandinavia and why the Senate should be scrapped and why health care reform was a good idea.

Unfortunately, Yglesias also sticks to the progressive wisdom on education, where, as it happens, the progressive party line is now exactly the same as the conservative party line. This makes education that holy grail of punditry for progressives—a topic on which they can appear to buck conventional wisdom without offending anyone who matters. All the edgiest wonks agree: down with teacher’s unions; up with charter schools; and when in doubt, bore the kids.

Yglesias, at least, makes no bones about his desire to bore the kids. In a post titled “Provocation of the Day,” Yglesias responded to an essay by Michael O’Hare. O’Hare made the modest proposal that it might be a good idea to teach kids things that are vaguely relevant to their lives and future success. Yglesias diffidently acknowledged that this sounds like it might possibly be an interesting idea… and then finished up like so:

I think the evidence suggests that one of the most important skills people learn (or don’t) in school is self-discipline rather than specific knowledge. I don’t think learning the chronology of ancient near eastern empires (Sumeria then Assyria then Babylonia then Persia then Greece then Rome) in elementary school has ever been useful to me, or even that the chronology I learned is especially accurate, but a lot of life involves semi-arbitrary tasks and it’s worth one’s while to get used to performing them.

The sand-in-your-eyes reference to “evidence” in that first sentence of the quote is especially nice. What evidence is this exactly? Well, if we are to believe the rest of the paragraph, the best evidence in the world—the evidence of Matt Yglesias’ success! Yglesias was bored by ancient near eastern chronology when he was a wee Yglesias—and look at him now! He has discipline, you young whippersnappers! So stop complaining that taking boring tests is (a) boring, and (b) totally useless for your future existence. Because it’s not totally useless! If you’re not going to walk up hill both ways to school carrying heavy packs on your back, the least you can do is to experience the transformative adversity of numbing repetition.

This logic is especially infuriating coming from a Matthew Yglesias. Yglesias is a Fellow at the Center for American Progress and a writer, but he’s best known as a blogger. He gets paid to blog. About whatever he wants, basically. Oh, sure, he needs to talk about policy and economics and so forth—but that’s because he likes blogging about policy and economics and so forth. He writes all day, every day, about the things he’s passionate about, without an editor or a publisher or anyone looking over his shoulder to nitpick. If he wants to write posts about basketball, well, hell, he can write posts about basketball. If he wants to write posts about pop culture, the fact that he is, when writing about pop culture, broadly ignorant, ceaselessly mundane, and wearisomely predictable is no obstacle, because it’s his blog. He writes what he wants. The one part of his job that requires discipline in any normal sense, where he needs to pay attention to boring details, is the one that he entirely and even militantly ignores. His spelling is legendarily poor, and he generally refuses to correct errors even when they are pointed out to him in the comments.

Far from having a job in which discipline is necessary, Yglesias has one of the least disciplined jobs one could imagine. If being bored in school had any effect on him, it was not to instill an ability to focus on trivial, mindless tasks. Instead, it’s apparently convinced him to have nothing whatsoever to do with those tasks. He’s not going to spell. He’s not going to write about only economics and policy. He’s not going to work at a job he doesn’t want to. Such drudgery is for those school kids who need to be trained for lives of data entry and/or stupid paperwork. Matt Yglesias? He’s going to pat those little suckers on the head and go off and write a post about the Washington Wizerdds.

Unfortunately, I doubt that Yglesias’  inspiration for bucking the system came out of his loathing schoolwork. I suspect it came from egregiously intellectual parents who told Matthew he was special and wonderful and should follow his dreams, and then gave him the resources and connections necessary to do exactly that.

And this is the second reason that it is frustrating to see Yglesias sing the praises of rote busy work. Because Yglesias is a progressive. He believes that you can change the system, and that things will get, not perfect, but better. He thinks you can have better health care, better education, a more egalitarian society. And, as I mentioned, I’m with him there—I believe that, too.

But how do you get there? I’d say that one of the main things you need is a society in which people respect their own unhappiness. You need people who, when confronted with a shitty health care plan or no pension or with bad pay or bad conditions or soul-crushing jobs with no vacation—you need people who look at those things and say, “This makes me miserable, and I shouldn’t be miserable. We should change this.”

The discipline Yglesias touts isn’t real discipline. It’s suffering for no purpose, and if it has any educational effect, it’s only to teach students that their suffering has no meaning, that they can’t affect it, and that they need to sit still and shut up. Sitting kids down for hours every day and forcing them to engage in pointless busy work without end—does that teach discipline? Doesn’t it instead instill the lesson that neither you nor your happiness matter, and that the most important virtue is neither thought nor action, but obedience?

Real discipline is what Yglesias didn’t learn in school—the discipline to pursue a worthwhile goal because it’s your goal and your passion. Many of those kids have faced the kind of adversity that neither Yglesias nor I have ever experienced, and which, God willing, we never will. They don’t need to be taught about unhappiness, tedium, or despair. What they need is for people to stop treating them like sociological curiosities or long-term experiments in behavioral adjustment, and to start treating them like fellow human beings. Which means, if that’s not clear, that we don’t randomly torture them, not even for the smug satisfaction of telling them that it’s for their own good.