Stop acting like a fifth grader and show some respect. 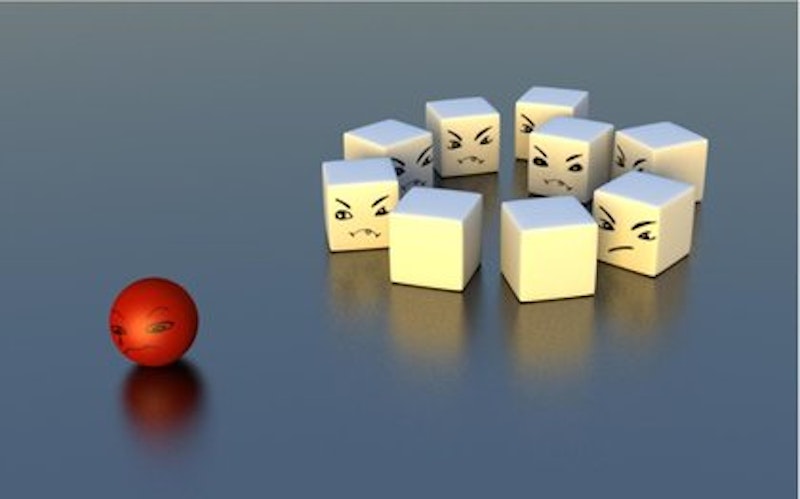 Most of the 42 kids in fifth grade, me included, met a Jehovah’s Witness for the first time when David Andrews enrolled in Calvert on a full scholarship. We didn’t know these details at first—his faith or his family’s economic status—but we could tell he was different. Back then, that earned him our derision.

David was a mess of contradictions to the 11-year-old mind: he was lousy at sports despite his 6’3” frame; he never completed his homework assignments despite constantly having his nose in a book (quite literally—David often got in trouble for slyly reading in class. He treated novels like we did our cellphones); he never received uniform violations despite always wearing the wrong shoes or polo shirts.

He stayed seated every morning while the rest of our class stood and recited the Pledge of Allegiance. Maybe that’s what started it. Nobody was a hardcore patriot—we were 11, the only bleeding hearts were for Dragon Ball Z and the Yankees—but it needled us all the same. Who does this kid think he is, to defy our traditions and disrespect our country? Mrs. Nessler, the homeroom teacher, probably overheard our grumblings, because it wasn’t long before she told the class that David was a Jehovah’s Witness, and therefore didn’t feel comfortable saluting the flag. That just annoyed us even more. He never did anything to us—never tried to prevent us from saluting the flag, or singing Christmas carols—but we felt slighted all the same, offended that he didn’t conform to our understanding of the world, that he expected us to respect his wishes.

Why? Why did we insist that he play Secret Santa, that he participate in our Easter egg hunt? Why did we complain when the Christmas party was renamed the Winter Celebration? There was nothing tactical about our teasing—we never sat down and outlined the reasons why we didn’t like David. He didn’t conform to our worldview—our isolated and insulated prep-school worldview—so we made him uncomfortable every opportunity we could. I often look back at that time and wonder what motivated me. My dislike for David wasn’t rational; it was instinctual.

We eased up by the end of the year. I’d like to say we became more compassionate, but that’s not true. We simply got bored, and directed our scorn elsewhere. Namely: Jim Khuvis’ ugly mustache. Kids are mean.

David and I went to different high schools. It’d been four years since we’d seen each other when I ran into him at an interscholastic chess match. I was cheering on a friend; he was competing. I said hi, asked him how he was doing, tried to be as nice as possible. I remembered how we treated him. He gave me a cursory “hello” and moved on. He remembered, too.

I haven’t stopped feeling guilty since. Before that, I’d assumed he forgot about our bullying, that he simply brushed it off as necessary hazing on account of his “new kid” status. But no, it affected him. How could it not?

We were stubborn, unwilling to accept someone who’s different. He didn’t ask for our friendship, just our respect. We gave him neither.

Daniel Mills summed up everything that’s wrong with Seavey’s article in a poignant response piece yesterday. Mills is right: “Ask a libertarian to change a single consonant to respect another’s identity and they act like you just took a shit on the Bill of Rights.”