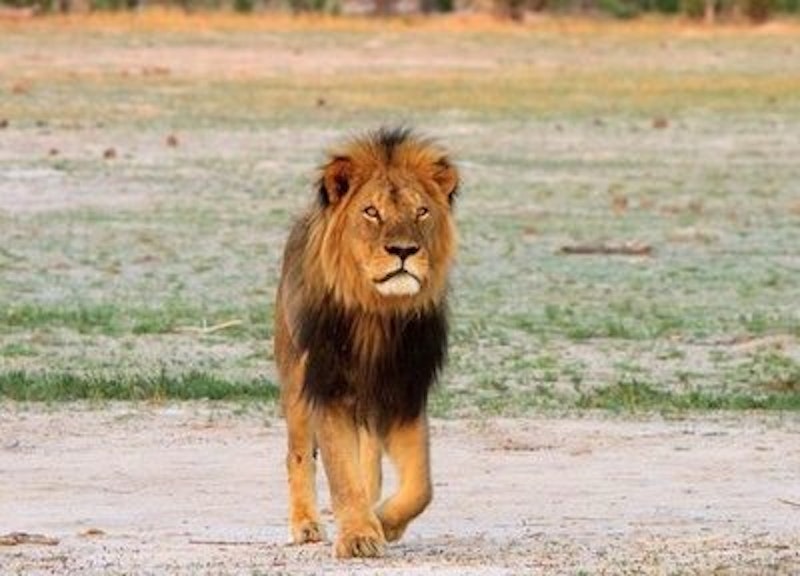 Along with thousands of others around the globe, I was outraged this week by the slaughter of cherished and protected lion, Cecil, outside Zimbabwe’s Hwanga National Park. The outpouring of anger has been directed to a Minnesotan dentist, Walter Palmer, who paid $55,000 to senselessly kill Cecil. Although this creature lived inside the preserve and was wearing a tracking collar, he was lured outside his boundaries to be slaughtered, skinned and decapitated by Palmer and his merciless poachers.

Cecil had been studied for years and videos of him flood the Internet. I can’t watch them and find it inconceivable why anyone would inflict horrific pain on the lion for fun and amusement. Cecil was wounded with a bow and arrow then tracked for 40 hours—a long time to suffer. How can a human being can feel good about himself following the blood trail of a dying animal for a day and half so that its head can fill an empty space in a trophy room?

The real loss is for the people of Africa. While habitat decrease and human-wildlife conflict are the primary causes of the lions' disappearance from Africa, trophy hunting adds to the problem. Approximately 600 lions are killed every year on trophy hunts, including lions in populations that are already declining from other threats.

Large, male lions are usually the most sought-after, as the African lion population has declined by 60 percent, with only 32,000 animals left in the wild. These lions lead long lives, produce cubs and protect mates. Cecil’s 26 cubs will most likely be killed by Jericho, the next lion in line in the hierarchy. Once the pride’s previous leader is gone, the new leader will often kill the cubs sired by him so he can bring his bloodline into the females. Unfortunately this results in the loss of an entire lion generation.

Pro-hunting organizations claim that trophy hunting brings millions of income dollars for people in poor communities. This isn’t so. Even pro-hunting organizations like the International Council for Game and Wildlife Conservation have reported that only three percent of revenue from trophy hunting ever makes it to the communities affected. Plus, the money that does come into Africa from hunting pales in comparison to the billions generated from tourists who come to watch wildlife. If animals continue to disappear from Africa, this vital source of income will end.

Americans are primarily to blame. Approximately 60 percent of all lions killed for sport in Africa are shipped to the U.S. as trophies. I don’t get it. Maybe Cecil’s death will help put lions on the endangered species list. Maybe it will tighten laws that discourage trophy hunting on the African continent and worldwide. Maybe it will inspire humans to show respect and kindness to the creatures who coexist on the planet with us.