Queasiness can be a sign of moderation, says Todd Seavey. 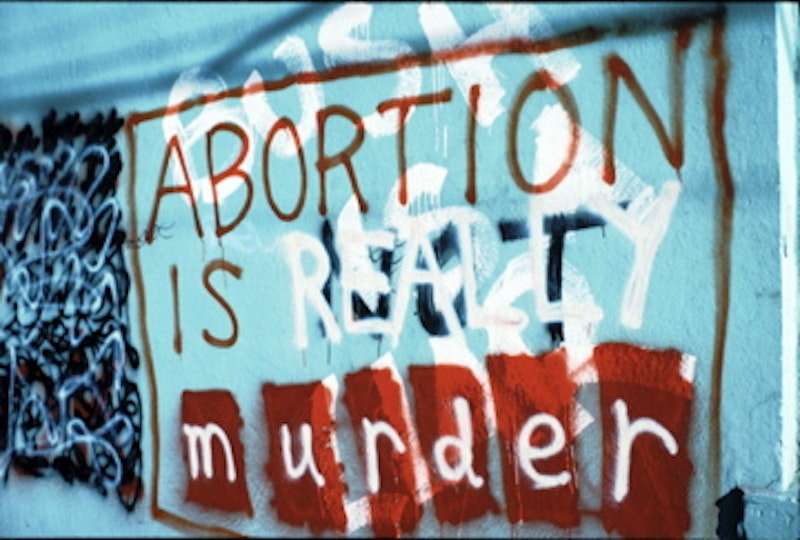 I usually don’t say much about abortion. I think it’s an inherently ambiguous, complicated issue, but most people cope with those by pretending they’re simple ones.

As a practical matter, I long figured that the extremists on both sides of the issue would do most of the shouting, to the delight of the media and politicians, and the rest of us would do best to just duck down out of the way and hope they cancel each other out. (I’m not using the term “extremists” dismissively here, either—I just mean it in the literal, descriptive sense of being on the far end of the opinion spectrum on either side of the issue.)

However, while I was ducking I failed to realize just how many of you were on my side, or else I might have been bolder. That is, the number of Americans who aren’t resolutely pro-choice or pro-life is pretty large. The numbers shift around depending on how the question is worded—and it changes over the years, not always in the “more left-wing” direction.

So it is that Gallup estimates, for instance, that (roughly speaking) while about a third of Americans are strongly in favor of keeping most abortions legal, only about one in five Americans want it legal in the second trimester. (This is not so unlike the situation in purportedly-progressive continental Europe, by the way, where there have often been second- and third-trimester restrictions stronger than anything in the post-Roe U.S.)

On the other side of the spectrum, only about one in 10 Americans want it illegal under all circumstances. Sounds at first like the pro-lifers are a fringe—yet the big mushy middle lean conservative according to Gallup, wanting abortions to occur only under certain narrow circumstances rather than being legal at will.

Forgive me for not sounding like an ideologue about everything, but I think that muddle is pretty reasonable. I mean, the extremists can make the issue sound as crystal-clear as they like—just as they can ostensibly make the meaning of those Planned Parenthood videos perfectly clear—but I think an honest person has to admit that pregnancy is a unique situation that seems less like something a simplicity-seeking ethical philosopher would come up with and more like something a sci-fi writer would propose:

Ethicist: “I think we need a rule against one person using another’s body without permission.”

Sci-Fi Writer: “Okay, but what if one person is stuck inside another—developing feelings and nerve impulses gradually—oh, and the one on the outside wants to eliminate the one on the inside!”

I mean, who comes up with this stuff? It’s crazy.

And I would argue it is reasonable to get queasy when you know you’re faced with moral uncertainty and confusion. So there are many Americans reacting with queasiness to those recent videos of Planned Parenthood (and Planned Parenthood spins and dissembles as much as if not more than its critics) for deeper reasons than simple-minded disgust.

When (fellow libertarian) Elizabeth Nolan Brown cavalierly says that if you accept abortion, there’d be no reason to be troubled even if there were unambiguous for-profit organ-trafficking going on in its aftermath, some ardent free-marketeers must grow a little queasy just from their familiarity with the power of the market to incentivize marginal (and sometimes morally dubious) activities.

And when someone like (fellow atheist) Rebecca Watson nonetheless reacts to it all with openly contemptuous certainty (even as details emerge of Planned Parenthood altering abortion procedures to ensure living organs, in apparent defiance of a federal law against altering procedures for such purposes), posting a video called “Planned Parenthood [I]s Not Selling Baby Parts, You Fucking Idiots,” I would imagine there are at least some viewers, fond of nuance or at least gentleness, who get still more queasy.

I think it makes sense for the moderates to be the ones who feel queasy about it all. The extremists are always unfazed.