What Do You Say If Bernie Wins Iowa and New Hampshire? 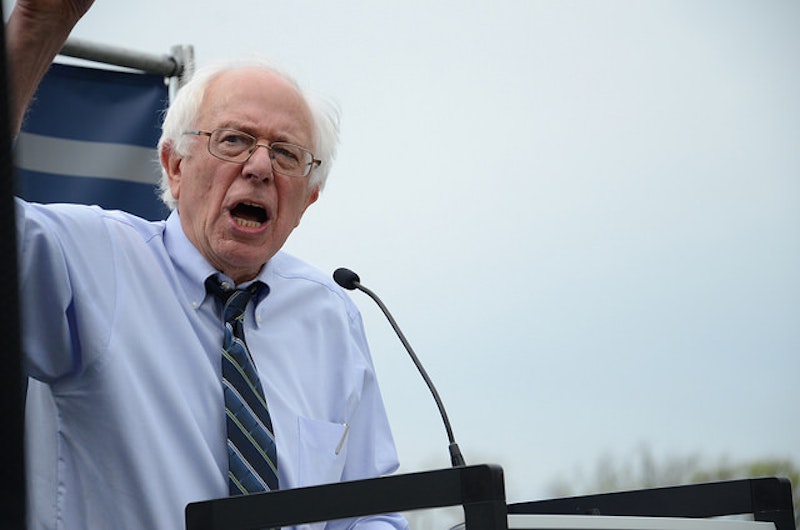 It's possible that next February important Democrats will be on TV talking about the Iowa caucus and New Hampshire primary of 1992. They'll tell you how Bill Clinton lost them both and still got nominated, and how this Iowa and New Hampshire stuff didn't matter in the end. I wonder how fast they'll be talking. Will they sound panicked or just over-emphatic and argumentative? It's moments like this when you can guess how close the wolf has come outside the established order's door.

I think Bernie Sanders has a good shot at winning both Iowa and New Hampshire. If he does, it will be the first time an insurgent has done so. I think the nomination will still go to Hillary: money will tell. But the magic ingredient in Iowa and New Hampshire is, of course, people voting. In mid-February, any confident talk about Hillary Clinton may have to dwell on the fact that money (meaning Hillary's superior resources) can outweigh votes (meaning the verdicts of Iowa and New Hampshire) when it comes to deciding the rest of the contest. Yes, the talking heads will say, more people will soon be voting for Hillary, voting for her... because of the money she spends.

Sanders has a shot at taking both states because Middle America learned some lessons around the year 2008. Our financial and economic systems have spent the past decade recruiting people for the Sanders cause. Now the candidate has shown up, and he gets crowds of 10,000 and raises $15 million. The other side has a lot more money, but Sanders is still on a solid footing. Add that Sanders is from Vermont, next door to New Hampshire, and that Iowa is a caucus state. People in New Hampshire know Sanders and seem to like him well enough. (NBC/Marist says Hillary has a net approval rating of minus 20 among all New Hampshire's registered voters. Sanders has one of plus 12—the only plus score for any presidential candidate in the poll.) And caucus goers in Iowa have a poor record of supporting Hillary. People may drive to the voting booth because of Hillary Clinton, but they won't spend hours standing around the community center until there's a head count. Whereas Bernie supporters will think it's worth the trouble.

New tune. For decades we've been told that Iowa and New Hampshire ground the electoral process. They're little states out in the boondocks, and a candidate without big money or media attention can go there and knock on doors. The regular folk may take a shine to him; if so he becomes a contender and dukes it out with the big boys. Or, if the states' voters decide they like the moneybags frontrunner, at least the frontrunner had faced the possibility of a revolt. Most likely he'd been out there too, knocking on doors and humbling himself (unless he was an incumbent).

To sum up what we've been told: if American politics has a set of organs, Iowa and New Hampshire are the ones that inject extra democracy into the system. That's why it's a good thing, not just an accidental thing, that they fall at the start of the election calendar. But next year the tune may have to pipe down so a new one can play. Iowa and New Hampshire will have spoken, and the person they spoke against will still be likely to win. Because she has more money. How will pundits get their mouths around that thought? In some gingerly and complicated ways, I expect.

Here's a phrase I think I came up with: legitimacy gap. The established order's cover story comes un-tucked and we see a roll of bare, puckered flesh lunging out from underneath the fabric. By April or May, the cover story will have been yanked back into place and we won't have to avert our eyes. But there may be some embarrassing moments before then.

About 1992. Yes, Bill Clinton did lose the Iowa caucus and the New Hampshire primary. But nobody ran in Iowa except Tom Harkin, one of the state's senators. In New Hampshire, Clinton was hit by a sex scandal and a draft scandal in the space of a few weeks. For most voters these scandals were the first things they heard about Clinton. Experts thought he was dead; instead he knocked on doors and talked at voters until he finished second on primary night. This astonished everybody.

Hillary's circumstances are quite different. If she loses Iowa, it will be to somebody from as far out of town as she is. If she loses New Hampshire, it won't be as a little-known up-and-comer whose potential is being measured. We know her.