Any candidate who engages Trump will probably lose. 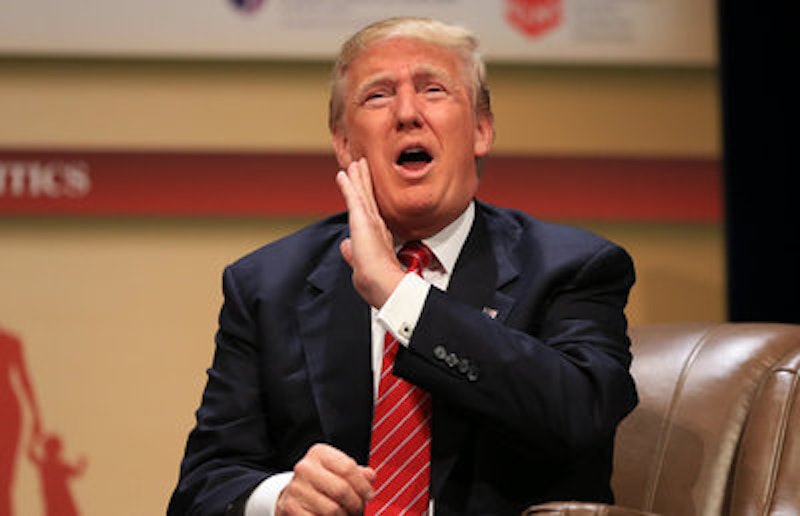 Debates are difficult to win but easy to lose. The paradox is especially slippery when a swarm of 10 or more candidates crowd the stage and one is a breakout showman and experienced reality TV performer.

Prepping for the first Republican candidates’ debate on Aug. 6 is like no other before it. The shambolic event involves, above all, trying to crack the top 10 in a field of 17 in the poll averages by five p.m. on Aug. 4, according to guidelines laid down not by a political party but by Fox News, more specifically, its chairman Roger Ailes.

To accomplish that, candidates have resorted to extreme antics to stand out from the crowd—Donald Trump making reckless but winsome charges, Mike Huckabee invoking the Holocaust and comparing President Barack Obama to Hitler and Sen. Rand Paul tucking a chain saw to the tax code.

The number of debaters is fluid as are the polls. Fox has said that it may allow as many as a dozen participants but no fewer than 10. Candidates will have 48 hours’ warning as to whether they’re in the debate which is short notice to psyche up and hop a flight to Cleveland for a make-or-break event.

There’s little question that Trump will set the tone and the tactic for the debate. Under Fox’s debate rules, the number one candidate in the average of five polls—and Fox is not saying which five it will consider—will stand at the center of the pack. That means Trump, exactly where he likes to be, smack in the middle of the class portrait.

In the land of the bland the one-liner is king. The only certain preparation and strategy a smart candidate can develop is to have a message, and a clear one at that, as a chance to be heard above the rest of the noise. There is nothing to gain by arguing with Trump. But there is a headline in attacking Obama and Hillary Clinton.

To appear non-discriminatory, even though the network is formulating the arbitrary rules, Fox has acceded to a two tier debate—the senior debate for the top 10 in the final poll roundup, and the junior debate earlier for the remaining seven who didn’t make the cut. Note that two GOP presidential candidates—Huckabee and Gov. John Kasich (Ohio)—are former Fox hosts. (CNN has established the same rules for the second of nine debates sanctioned by the Republican National Committee.) At this point, the poll numbers are meaningless. Except for the top-ranked five, many of the others fall within the margin of error.

Trump is leading in all the GOP polls, a tribute at this early stage to recognition from his TV work as well as tapping into a roiling undercurrent of angst within the xenophobic sector of the electorate. He is followed, in shifting order, by Gov. Scott Walker (WI) and Jeb Bush. From there it’s a day-to-day measure—Sen. Marco Rubio (FL), Huckabee, Dr. Ben Carson, Sen. Ted Cruz (TX), Sen. Rand Paul (KY). The next tightly wound cluster includes: Gov. John Kasich (OH), Gov. Chris Christie (NJ), Rick Perry (TX). Those who are not on the senior debate list are: Rick Santorum, Gov. Bobby Jindal (LA), Carly Fiorina, Sen. Lindsey Graham (SC), former Gov. George E. Pataki (NY) and former Gov. Jim Gilmore (VA). The early line on the debate is that the only other candidate with a mouth to match Trump’s is Christie.

There are a couple of subversive reasons (other than ego trips and an open presidential seat) why the Republican roster of candidates is so jammed this season. The first is the Supreme Court’s Citizens United that allows unlimited campaign funding by unnamed sources. All a candidate has to do is find a sugar daddy or a super PAC to sustain a candidacy through an early primary run to determine what’s under the hood. (The Koch brothers, for example, plan to spend nearly $900 million to advance their libertarian causes. In 2012, casino mogul Sheldon Addelson pumped nearly $100 million into Newt Gingrich’s losing campaign. Gingrich still carries a $4 million leftover debt.)

This line of thought does not apply to Trump, of course. He has his own money. Trump’s real threat is his ability to run as a third party candidate if he washes out of the Republican primary contest as many expect will happen eventually.

And the second reason the list keeps growing is that the more candidates who’re in the race the fewer the votes that are needed to win the early primaries. With 17 candidates (and counting), it will take about 15 percent of the vote will win an early primary election, little enough to keep coasting until money runs dry or starts flowing.

So the attitude is that given those odds almost anyone with a message and some name recognition has a mathematical shot, especially with the Republican party fractured into at least three distinct groupings—the establishment wing, the Tea Party fringe and the evangelicals.

Trump so far has dominated the campaign conversation, mainly because of his hard line on illegal immigrants, though he claims he loves Hispanics and is their leading choice in the polls. His appeal seems to be that he is everyman’s work-a-day billionaire, a plain-speaking guy, for real or pretend the avatar of authenticity, who has achieved the American dream even though he hopscotches the country in a private jet and lives in an eponymous skyscraper in mid-town Manhattan. In a sense, Trump is this season’s anti-politician. “I am who I am… I’m not a debater,” he said when asked if he’s preparing for the debates. And in one declamation he smartly lowered expectations.

Political debates are about exposure and composure. Candidates know they’re not going to change many minds. Research has shown repeatedly that debates merely reinforce what viewers already believe rather than make many converts. Yet the risks are profound (In 2012, Rick Perry’s wheels came off the moment of that humbling memory lapse.)

And curiously, as important as the debate itself is that the next day’s headline carries equal if not more weight, not so much who won as who didn’t lose. Embedded in every viewer’s mind is the thought that their candidate won (unless they really screwed up.) Candidates, too, will be appearing for money. A standout performance can mean a significant spike in contributions as well as a chance to attract a generous patron.

So this early in the electoral process, the debates have little outcome on the actual nomination of a presidential candidate but serve as more of a preliminary audition or, to frame it more precisely, a necessary job interview. Because, in truth, the debates are really not debates, and any candidate who stumbles into one (especially with Trump) doesn’t belong on the stage. The audience does not like bullies or candidates who beat up on their favorite. The soundest strategy for this outing is, forget the other guys and sell yourself.