Tired Trump Back on Fox

The kid goes on these jags. 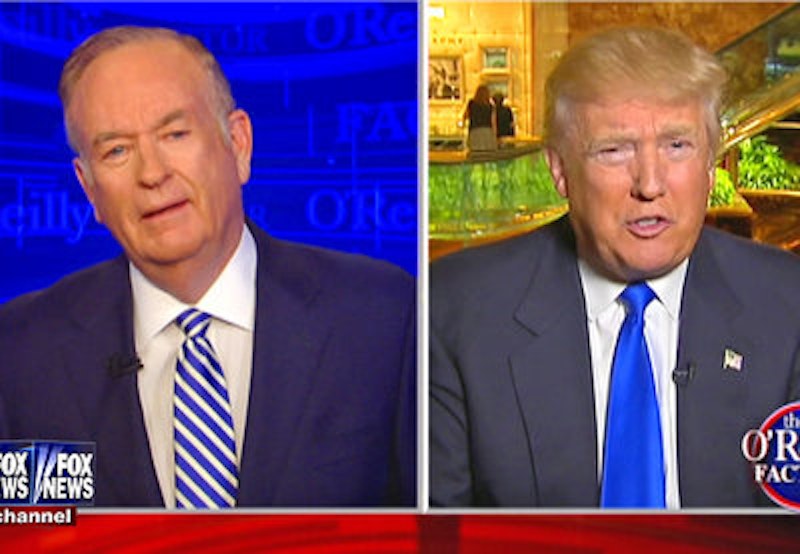 He's back on Fox. He'd been saying he wouldn't be, he'd skip the network fora while. Roger Ailes put out a statement that, no, Fox had canceled Trump when he was supposed to appear on The O'Reilly Factor and that's why Trump was tweeting about how he was going to stay away. After the tweet and the statement, news items popped up saying Trump and Ailes were going to meet. Early this week  news items said the meeting hadn't happened yet. Meanwhile, Donald Trump is back on The O'Reilly Factor.

I wonder if Trump's pals, up there in the big time, shake their heads. They know what it is with him. He should drink but instead he tweets. It's a thing with him, the stuff has to come out of his mouth, and he goes on benders that way. They all knew guys who went on a strange three weeks and then had to climb back. Not a good method of getting through life, but some people are stuck that way. If they can still deliver, then okay, this is how they have to do it. But they'd be much better off if it wasn't. For example, Trump.

He saw Charles Krauthammer on TV and didn't like it, and therefore tweeted. He kept watching until Megyn Kelly came on, then got outraged and tweeted about her. He had kind of promised not to, there had been a whole thing about it. But he did. Then he was saying he'd just skip the network for a while.

Now he isn't skipping the network, and it looks like he's the one who called for the meeting (which still hasn't happened). On air, O'Reilly rears his head back as he absorbs the surprise of “one Donald Trump,” the sulky rebel, coming home. O'Reilly and Trump are in their separate squares on screen, not side by side in a real-life location, and O'Reilly looks full-size. Trump glowers, possibly like a teenager absorbing punishment, but possibly for no special reason. His face is usually knuckled up, eyes narrowed like he was daydreaming about getting good and steamed.

When he starts talking, he doesn't sound like he minds O'Reilly. Trump says what he says, nothing new. On Syria, when O'Reilly says Putin might end up running the place, Trump says, “All right, okay, fine.” Actually it's more like “All right. Okay. Fine!” A few days ago, interviewed on the same subject, Trump used the phrase, “What do we care?” O'Reilly sounds much more worked up, and yet aggressively casual. Getting tired of Trump's thoughts about Bashar al-Assad, O'Reilly cuts in. “Yeah, but he's a mass murderer,” O'Reilly says. “We get the gas, all of that.”

O'Reilly asks Trump if he's being treated unfairly. I'd seen a mention someplace that the show would have the two of them talk about Fox. But no, O'Reilly says he just wants to know if Trump thinks that he, O'Reilly, is being unfair to him. “Me and you,” O'Reilly says. Trump says no. I remember when I saw the item about the Trump-O'Reilly Fox discussion. I thought, in effect, Boy, that's an event. When I was a kid I would get excited about FOOM (Friends of Old Marvel). I've always been like this.

Trump grinds away at his stand-by theme. The big fat check that is himself and how it backs any promise that can be made. Him, he, the wonderfulness he presents before us, will carry out what must be done. Being tired is not good for this approach. Look at Trump in late July and look at him now. That is a robust man; this is a sack holding on. He's still topped by that head with the motormouth. But a wind-up toy chugs along a bit before it falls over. People are wondering—all of us who read Trump poll stories and argued about the debates—if a wind-up toy has been wandering about and we spent the summer watching it.

“Now,” O'Reilly says at the end. “Fair interview? Everything fair? Are we good?” He's the high school principal after getting some sense into a nutball kid. O'Reilly's hands are wagging in the air, one flipping toward him, the other way away from him. He's jolly.

“You were very fair. You are always fair,” Trump says, and O'Reilly punctuates this with a chortling “Yeah, yeah, yeah.”

“Almost,” Trump says, his finger up.

“Almost!” O'Reilly says, chortling. “I know.” He tells Trump “you're a fascinating guy.” The segment is done.