It's Good No One’s Paying Attention to Lawrence Lessig

A dream of a Democratic Party as dumb as the GOP. 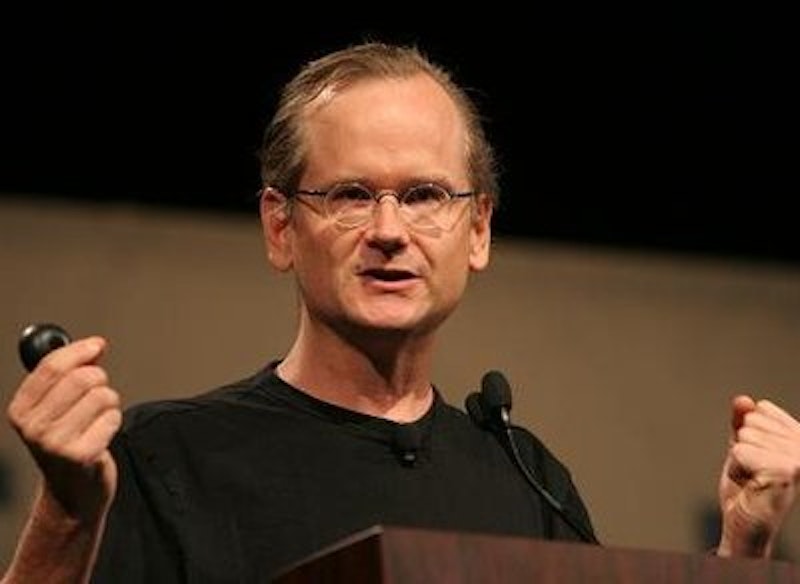 A one-issue candidate gains notoriety and public support by declaring himself an outsider and inveighing against corrupt parties, Washington politicians, and "politics as usual." When career politicians or the media point out that he’s unqualified, he represents their resistance as yet another sign of their bad faith and a broken-down system. He positions himself as both gadfly and martyr, a tough-talking truth-teller who can brush aside Congressional gridlock and the give and take of compromise on Day One, through sheer force of personality and general individual awesomeness.

Donald Trump has gotten all the press because he's better at showing his ass. But law professor and activist Lessig wants to show his ass too, even if it's somewhat smaller. His op-ed this week about being shut out of the Democratic debates hits all the Trump notes. "This experience has led me to believe it’s not just the rules that discourage an outsider Democrat. It’s also the party." Thanks, genius, for the news flash that the Democratic Party regulates who gets its nominations, almost like that's the entire function of political parties. And the repetition of the word "corruption" "corruption" "corruption," that shibboleth which explains everything. If only corruption could be rooted out by some pure knight of virtue, there would at once appear common sense solutions to all problems, without having to worry about inconvenient facts such as, many Americans really like guns and big cars, and don't like the idea of open borders.

Trump is a racist, self-aggrandizing stooge; Lessig's policy prescriptions are ones I broadly agree with, and I'm sure he means well. Nonetheless, Lessig's approach to government is in many ways even more misguided than Trump's, and possibly more dangerous. Trump promises to stop immigration through mystical Trumpness… but he doesn't claim that fixing immigration will solve every problem America faces.

He's made at least vague gestures at floating a tax plan and addressing other issues.

Lessig, though, says there’s only one issue—getting money out of politics. For Lessig, this is the root of all evil in U.S. politics. Politicians listen to the wealthy, not to the everyday person on the street. If you could just get put restraints on campaign giving, you'd get reasonable policies across the board. The problem is simple and unitary. Every other agenda—Black Lives Matter, environmental, foreign policy—should take a back seat to money in politics. As Lessig says, "Every important issue that Washington faces is affected by this corruption. And what America needs right now is candidates willing to explain this truth, to describe a plan to fix it, and to commit to fixing it not someday, but on Day One."

Politics in a massive democracy with millions and millions of people is complicated. There are lots of different power centers, and lots of interest groups, who push for their policy preferences in different ways. Changing campaign finance rules may affect those balances—but it's not going to suddenly make liberal policy preferences the default. In many cases, it won't even make them more likely. Anyone who tells you otherwise is lying.

Lessig lambasts presidential candidates for making promises they can't keep, and suggests that they can't keep those promises because wealthy oligarchs won't allow it. But this is foolishness. Presidential candidates can't keep their promises because we're not in a parliamentary system, and presidents have extremely limited powers to pass anything if Congress and the courts don't go along. A successful president needs to figure out what’s possible and what isn't; to prioritize and negotiate and compromise.

Lessig doesn't think he's going to win. He's just hoping to make campaign finance reform and money in politics a bigger issue. Which is fine; I'm not sold that it's as important as he says it is, but he's welcome to make the case.

But his message that this is the only issue that matters, and that anyone who doesn't agree with him is corrupt, is stupid and poisonous. The GOP has currently convinced itself that politics is a pageant of purity and resolve, so if Republican representatives can't enact all their policy preferences, it must be because they’re insufficiently pure and resolute. Lessig offers simplistic nostrums, and with a similar recipe for explosive cynicism and confused frustration. For Lessig, our problems can be solved with a technical fix. The possibility that there might be real, legitimate differences of opinion in our political system doesn't seem to cross his wonkish brain. It's a sign of the Democratic Party's health that almost everyone is ignoring him.