Seven Things You Hear When You're Losing 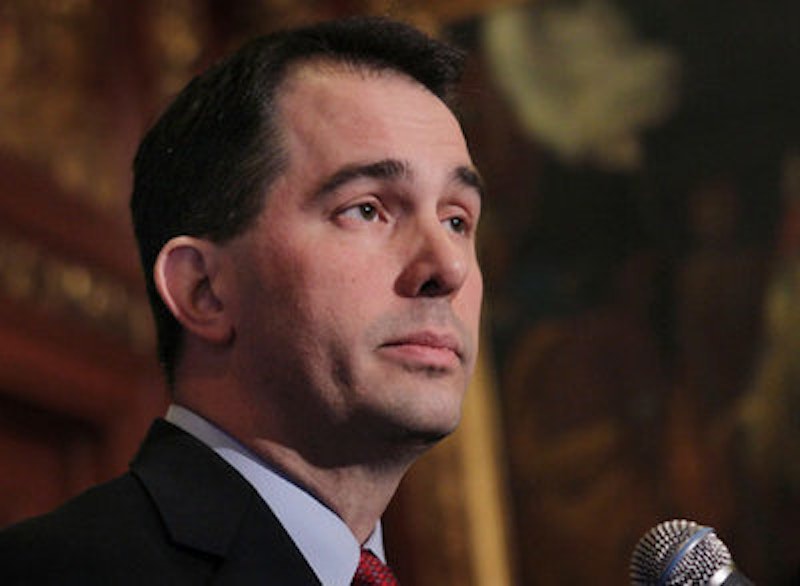 The phrase “if he's smart.” Applied to you by one of your big donors. Who's talking to a newspaper reporter. “If he’s smart, he will get back to basics and get back to what he did in Wisconsin, get off the social issues,” said Stanley S. Hubbard, a billionaire who owns a bunch of TV and radio stations in the upper Midwest. The “he” is Gov. Scott Walker of Wisconsin, who recently flamed out as a presidential candidate. Hubbard gave money to get the governor elected president, and he talked about his man like he was Walker's boss.

Except a boss doesn't announce to the general public what he just told his employee. Hubbard had lunch with Walker and then talked to The Washington Post. Hubbard said he “did not get a real straight answer” just then when he asked Walker about birthright citizenship. He also said he “might really quickly change my allegiance” if Walker kept talking against birthright. Still, the billionaire said, “I got the feeling that he is not at all anxious to talk about taking away those rights.” It was like seeing a leash being jerked.

“Wisconsin-related matters” as a description of your policy strong points. That's how the National Review put it. Here's the rendition of sharp-tongued Morton Klein, head of the Zionist Organization of America: “Look, he’s the governor of Wisconsin. He knows about cheese and cutting pensions.” Klein's remark got its share of attention because it's funny and because Klein is on close terms with Sheldon Adelson, a casino magnate who's worth $28.9 billion. Republican presidential candidates want money from Adelson. Walker certainly did, but he didn't get any. If a reporter asked Walker about Syria, he'd talk about Israel, us doing right by Israel. But it takes more than that in the big time.

Somebody says the big problem is that people keep meeting you. Steve Deace, a big deal among Iowa's conservative radio hosts, put it this way. First, he said, Walker-friendly elements in  “conservative media” overhyped the governor, “built up a level of expectation for him that was simply impossible to meet.” Then voters encountered the governor himself. They got a look. Their reaction (in Deace's words): “‘This is the fighter from Wisconsin? Where’s the fighter? Where’s the energy?’” Deace summed up this experience, poetically, as “They see disappointment.”

Deace could think of no solution to the problem. “And I don’t know how he can combat that,” Deace said. “I really don’t.” (He's supporting Cruz.)

“I'm not intimidated by you, sir,” somebody says. It's you. You're saying it. Protesters at the Iowa State Fair had signs up and were heckling. Walker tried to restage his Wisconsin union-busting feat, kind of like Burt Ward 10 years after Batman. The candidate to a protester: “I’m not intimidated by you, sir, or anyone else out there. I will fight for the American people over and over and over and over again.” Then, to the rest of the crowd: “You want someone who’s tested? I’m right here.” It's hard to read these words without imagining him jumping up and down. Leaders don't stick up awkward little pronouncements, little verbal billboards, saying that they're leaders. It's bad enough when politicians say, “This is an optimistic vision.” At least the politicians don't care about being optimistic. There's no shame for them in billboarding the quality, putting it on. Not a smart move, since the tactic is clumsy, but using it doesn't cut at the soul.

Leadership is different. Your balls are supposed to clank on their own. If you have to say “Those are balls you hear clanking,” then maybe what you have is a rustle. If you have to say you're not scared, then very likely you are scared, which means you have no balls at all. That's a hard thought to live with. Note that Walker's campaign slogan, a late choice, was Unintimidated.

“That is a legitimate issue for us to look at.” You're talking about a wall with Canada. You're not sure why. Chuck Todd had a simple question. If terrorism makes it so important to have a southern wall, then why not a northern wall? He laid down his question like a topper: “Do we want to build a wall north of the border, sir?” The candidate chose to answer by serenely, or almost serenely, rising above the topper.

“Some people have asked us about that in New Hampshire,” he said, showing aplomb while his thatch of a combover gripped his scalp, riding with it as his head tilted for emphasis. “They raised some very legitimate concerns, including some law-enforcement folks that brought that up to me at one of our town-hall meetings about a week and a half ago. So that is a legitimate issue for us to look at.”

He was back on course. “To me, when I brought this up in front of The Citadel,” he said, with “this” meaning homeland security, the whole subject. The wall was behind him. He'd driven over the bump.

“Boy,” a supporter says, “they made you sound so stupid.” She was Brenda Cameron of Dover, New Hampshire, and she was sympathizing with Walker. The governor nodded at her words. This was all about the Canadian wall. “I’ve never said that, nor would I,” Walker told Cameron. “When they say things like that, you just have to laugh and roll your eyes.”