Legislators know how angry voters are. 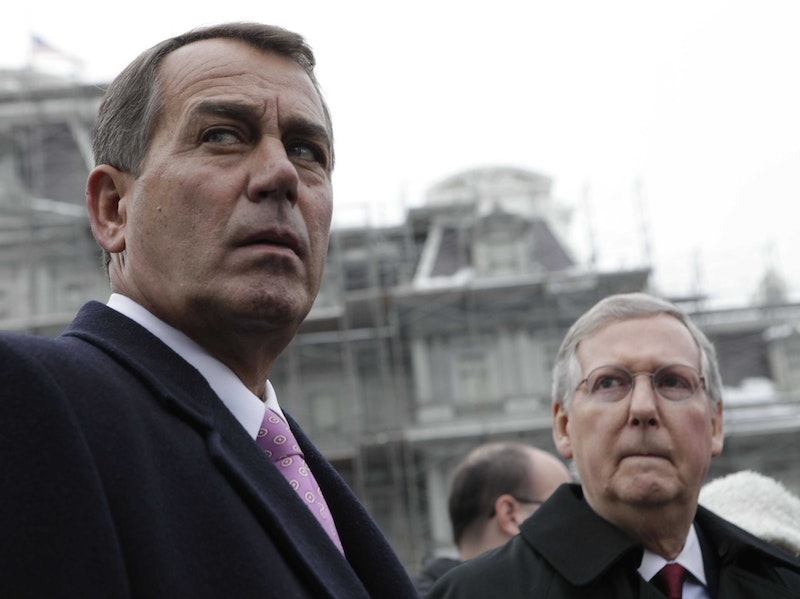 Ridiculous as he is, Donald Trump’s effect on the ineffectual political establishment is fun to watch. Might we have him, indirectly, to thank for the pushes among Republicans in Congress to get rid of Speaker of the House John Boehner and perhaps soon Senate Majority Leader Mitch McConnell?

Legislators are rarely moved to do anything except by the fear that without change, they will be at risk of not being reelected. (Don’t imagine they care about principles.) Trump is a reminder to at least some congressional Republicans just how angry their constituents really are at the establishment’s record of non-accomplishment. They need to at least look like they’re playing hardball, and Boehner and McConnell don’t help.

Boehner has long been rumored to be more interested in compromising, leaving work early, and drinking than in ensuring a conservative agenda is passed. And that apathy is still arguably superior to McConnell’s contemptuous attitude toward their party’s ideologues. Recall that McConnell endorsed Rand Paul’s primary opponent in 2010—and, when asked what he thought of all the Tea Party candidates rising across the land to challenge incumbents, vowed to beat them. Who needs Democrats?

Right now, it looks as though Trump’s doing a better job of uniting Tea Party and (moderate, swing) Reform Party-type voters than McConnell could ever do of uniting Tea Party and standard Republican Party voters, or Rand Paul of uniting Tea Party and libertarian voters. I really like Paul, but his latest lame strategic move appears to be defending his fellow Kentuckian McConnell against criticism from almost-libertarian Ted Cruz. That doesn’t seem like something a man still hoping to fight boldly throughout a protracted primary season would do. With one of his super PACs openly abandoning fundraising for his presidential campaign, he may be resigning himself to the idea of a long Senate career.

While Bobby Jindal lasts this presidential season, it’s nice to see him, at least, so openly and vehemently denouncing current Republican leadership.

Mind you, I don’t share the disgruntled rank and file’s sense of urgency about immigration, but a lot more diligence from leadership on the immense issue of the federal debt would be helpful. It’s also just good to see a lazy establishment sweat. (Similarly, one has to have a soft spot for the government of Arizona when it scuffles with the federal government, even when Arizona is wrong.) Just as the “liberal-tarian” faction within libertarianism benefits from having to scuffle occasionally with more right-leaning libertarians, the conservative establishment probably deserves to get called “cuckservatives” for a season even if the insult is rude and bigoted. Some eyes deserve whatever thumb can be directed at them.

The long-term challenge will be making sure that when the fighting is over, it isn’t the same bland establishment centrists who emerge, pretending to be the right’s solons, to pick up the pieces. Moderate conservative historian-of-the-right Geoffrey Kabaservice is already weighing in with a piece in The New York Times called, all too rosily, “Anarchy in the House,” chalking up the GOP’s woes to the excessive influence of its ideological radicals—among whom he even includes the late, revered Goldwater.

The party must be able to truly govern, says Kabaservice, not just lob ideological assaults. Governing is not a victory unto itself, though. Stalin governed. Trump may yet govern. The goal is freedom, not just electoral victory. If the Kabaservices and David Brookses of the world don’t get that, ironically, they are the ones summoning forth more Trumps as an angry, vengeful countermove against the complacent.