It’s the end of the world as Frank Bruni knows it. 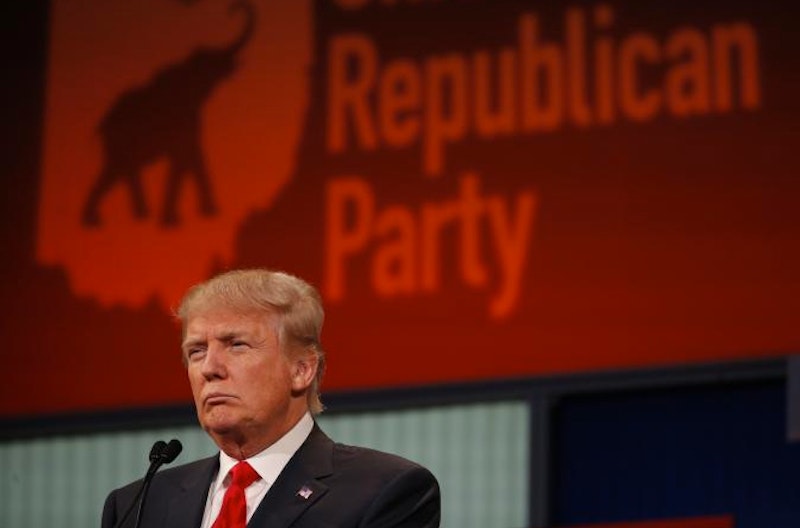 Gee, but it’s great to be reading Frank Bruni’s column again, Bruni’s column is where I want to be! Just sayin’, folks, because prolly you’re wondering, I’m feelin’ groovy! (But idk, not quite feelin’ The Bern yet, even if he’s embarrassing borderline crook Hillary Clinton almost every day. LMAO!) Trumpkins, Trumpzis, man, has the unctuous Queens developer come a long way from just one of those in the clown car! Now, according to earnest Democratic bloggers like Jonathan Chait, the candidate who inspired the mass, mass, mass movement #NeverTrump is threatening the very existence of American democracy! Keep your wits steady as she goes, sheeple, because the whole wide world is watching!

On Sunday, Bruni doubled down—no! quadrupled down!—on the mansplaining (I might have to delete my account since I prefer Ricky Ricardo telling Lucy she’s got some plain ‘splainin’ to do!) about the realities of the fake-steak peddler’s dangerous addiction: to himself. Like, duh! Really, Frank—or, idk, maybe next year we’ll be calling him Francois if he hightails it to Paris or Montreal—had just one job to do, and he was late to the funeral!

Francois says a Trump candidacy—or God forbid, presidency—will not end well. The opposite of hilarity is sure to ensue! Baffled by Trump’s 24/7 TV appearances (ratings, duh! TV suits are as greedy as Trump), tweets, rallies and insults when normally a front-runner for a prez nomination tries to run out the clock and make him/herself scarce, Francois says: “What eggs [Trump] on is the sound of his name uttered by pundits, rivals, crowds. To his ears it’s a music sweeter than Beethoven’s, saucier than Beyonce’s. He tangos to it, or at least his itty-bitty-heart does.” And you know what they say about men with tiny hearts! I don’t, actually, and since I don’t indulge in snark—idk, that was Gawker’s shtick a decade ago, amirite?—but if true, just one word for it: sad!

I mean, Words. Fail. Me. And because I’m not a hater who hates, let’s give Francois this much: unlike many of his #NeverTrump colleagues, he knows that Herr Drumpf won’t govern as a conservative, liberal or independent, but rather as a Trump! That makes sense to me, as opposed to rootin’ tootin’ shootin’ Ted Cruz, who might not force Mexicans to pay for a border wall made out of gold, but will send them darn illegals back to the hellholes where they belong, but only after he’s kept them in a detention camp, with a recitation of “The Lord’s Prayer” on a continual loop.

Mmhmm. Francois gets to the meat—that questionable bone!—of the super-obnoxious celebrity at his column’s conclusion: “There’s only measure for Trump: more. More products bearing his brand. More buildings blaring his name. He’s a modern-day Midas, with a vain twist. Everything he touches turns to Trump.” Is that blasphemous? Prolly, since it riffs off that biblical water-into-wine tall story. Anyways, more Francois: “No reassurance sustains him for too long; not validation suffices. That would be as true of Trump the president as it is of Trump the candidate, and it would dictate the terms and tempo of a reign from which this country would not soon recover.”

I mean, I’m so old that I can remember when hot tamales in the supermarket lines would squeal upon Jeane Dixon’s prophecies, and let me tell you, Francois ain’t a patch on Sweet Jeane. Like—and pardon my vulgarity, my barnyard epithet—how the fuck does Francois know how a Trump presidency would go down? Maybe he’ll turn out brilliant on the economy, and not mess around with unnecessary military excursions. Maybe he’ll get a pistol shot in the head by a pissed-off Bernie supporter. Maybe he’s just as lousy as Jimmy Carter, a one-termer whose protectionist rhetoric turns real and the country slides into recession. So could be prudent for Francois to walk that back, and expand, making similar predictions for Bernie, HRC or Cruz.

As for myself, I’m just sittin’ on a fence, and you could say I got no sense, but I got no clue who’s a-gettin’ my vote. Won’t be Cruz. Won’t be the jailbird (one hopes!) Hillary. Might not do my duty at all, or, alternatively, go all 1968 and write in a candidate: maybe Chris Hillman (even though the ex-Byrd’s an alleged prick—but that prick is yuuuggge!), Joan Didion, Bill Murray, Camille Paglia, Doug’s dog Pork Chop or my old Huntingtonian friend Scotto Savitt. It’s March, chico, just too early to tell.