On the Brink in Florida

Pray for Marco, pray for us all. 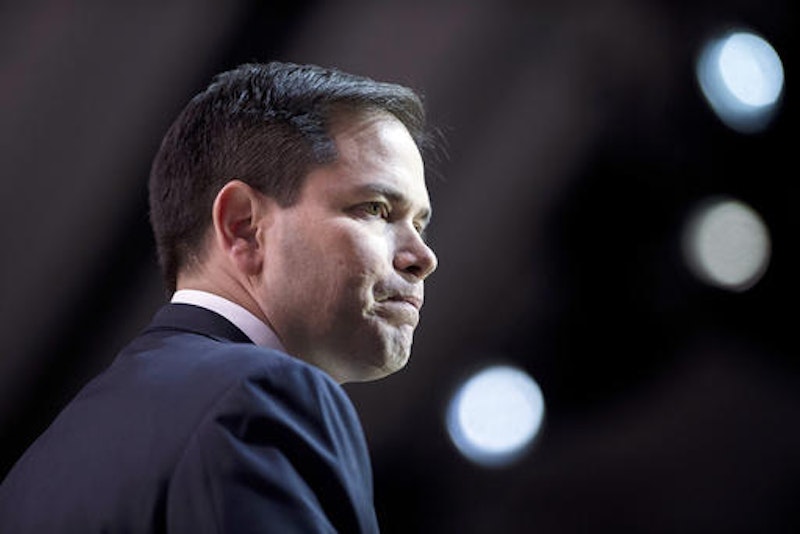 Marco Rubio is from Florida, and he’s desperate not to get crushed in the presidential primary there. For one thing, losing would mean no more career. For another, it would take Donald Trump a long step closer to the Republican nomination. I think Rubio may care as much about the second problem as he does the first. I’ve never trusted him, but events can force anybody to be honest. Something just hit Rubio, good and hard. He’s been run over and now he’s thinking, and with the picture coming clear he’s a bit scared. The thing that ran over him is still on the loose; everybody is in trouble. Accordingly, the senator just gave a news conference about the dangers of populist authoritarianism. For once he seemed like somebody saying what he thought, not what he could get away with.

Rubio told the reporters what he has seen. He did it like the survivor of a wreck, but up several grades for presence and verbal fluency. He’s a high performer that way, and you can see why people decided this young man ought to be a senator (though not president, come on). What he unloaded for the press—his horrified awareness of the Trump Crisis—is the closest he can come to unmuddled truth and lived honesty. He said a would-be president shouldn’t whip up people’s anger and tell them to start hitting. He explained that a front-runner of this sort is quite a departure for the country. Rubio’s eyes moved from face to face, locking with whoever asks him a question. Even so, he seemed miserable. I suppose the nervous, unhappy senator is calculating whether a Trump presidency means a Rubio fatality down the road; later that day, in an interview, he mentioned Trump’s resemblance to “third world strongmen.”

Sincerity is rare in newsmaker appearances, but it does bulge out here and there. To my mind, Rubio looked like somebody living a felt moment on screen. Characteristically he was rattled, but this time (I mean unlike New Hampshire) he failed to glitch. He spoke ably, the worried young scientist in a movie about a killer virus. Being Rubio, he seemed a bit petulant about the virus; he isn’t just young, he’s boy-like.

In general Rubio’s thinking is spavined. In these very remarks he said Barack Obama “has taken an attitude that if you don’t agree with him on public policy, you’re bad. I’ve seen him do that.” This from the candidate who flogged the Dinesh D’Souza line about Obama deliberately sabotaging America. As H.P. Lovecraft once said, what keeps people going is the ability not to connect dots. But reality has broken through a wall, and the young man doesn’t like the look of it.

The horror’s most immediate form: Real Clear Politics says polls in Florida show Trump ahead of Rubio by an average of 18 points. Pray for Marco. Pray for us all, because we all need to be saved.

Ex-hero. Marco Rubio was supposed to be the Romney that worked: somebody young and fresh saying the same necessary things about tax cuts and reduced entitlements. Saying the things from a brown face and in two languages. The Republican powers-that-be waited an extra couple of months before plumping for Rubio, but the plumping did occur. Senators and governors endorsed him. On Fox News, Frank Luntz’s face lit up when he told viewers how the focus group loved Rubio’s joke about Bernie Sanders and Sweden. That was a few days before Iowa.

Consider Luntz now. After the Detroit debate, a voter in his focus group dismisses Rubio as desperate. Luntz answers, “But I want to focus on John Kasich. I want you to play the clip that absolutely scored through the roof.” It turned out the group really liked hearing Kasich say “cool, calm, deliberate, effective.”

Rubio didn’t work out. He went after Trump but sounded like a yappy dog. He made that pair of dumb jokes, the one about wet pants and the one about penis size. Yes, it’s important for the cause to get the penis size issue into play. But Rubio, the person who did it, paid a price. He fouled himself, got stuff on himself. Super Tuesday came and he flopped. Also, of course, endorsements aren’t worth that much this year.

The verdict: “We’re finished with Rubio,” said Roger Ailes, who runs Fox News. “We can’t do the Rubio thing anymore.” Granted, Ailes said this to “a Fox host,” not to New York magazine, which reported the bit second-hand. But one thing’s clear: Fox has been treating Rubio like unwanted leftovers. Except Sean Hannity, who treats Rubio like a dish of road kill forced beneath his nose.

The New York item reported that Ailes is “back to searching for a candidate the channel can rally behind.” Hence Kasich, I suppose. The Rubio thing is done. He ain’t no hero. He’s a smart young man who didn’t know what he was up against. Now he does know, some, and he was just talking about it. I say listen. That’s Marco Rubio, telling the truth.