Where No Conspiracy Has Gone Before 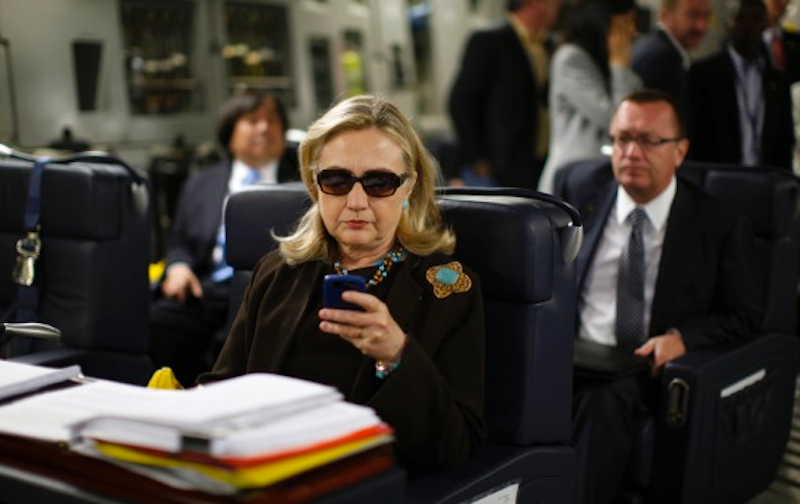 Today is the 20th anniversary of the day an alternate juror who always wore a Star Trek uniform was dismissed from the trial of Hillary Clinton associate Jim Guy Tucker who was caught up in the usual web of crime and lies surrounding the Clintons.

I’m the proud owner of an autographed photo of that juror (provided by a friend in Arkansas). I should gaze upon it every time someone close to Clinton goes to jail. That happens frequently, though perhaps not as often as it should. Ironically, Clinton got her start as a lawyer on the team investigating Nixon during Watergate, so she may already have some idea what her presidency is going to look like.

She’s not the only Nixonian creep in politics, of course, as her former boss Obama reminds us when he crusades (in his low-key way) against encryption and lies that the government can’t hack iPhones without expanded powers or that the NSA snoops on international communications but rarely domestic ones.

Keep in mind every time politicians talk about the federal government as if it operates according to careful procedures and strict legal guidelines with full respect for your privacy, they’re defending the same government you can now watch, in slow motion, murdering land-use activist LaVoy Finicum with his hands up, thanks to this video posted by Portland’s main newspaper, The Oregonian. A crime not visible in the video is the FBI lying about it afterwards, as government tends to do.

You can’t helping feeling claustrophobic when you think about how easily tracked and controlled we are now compared to pre-modern times, when if you didn’t like the local politicians, you could literally walk to another town, announce your newly-chosen name, and quite possibly live out your life with a whole new identity, assuming the plague or brigands didn’t get you and the king didn’t start a war. It’s hard to exit the grid now and getting harder all the time. Back then, there was no grid.

Small wonder some libertarians and other dissidents dream of “seasteading,” starting new micro-nations in the middle of the ocean. That project hasn’t gotten too far yet, but my friendly advice to Seasteading Institute founder Patri Friedman was that they should start out with something mainstream, easily understood, fun, and perfect for fundraising purposes, namely ocean liner cruises. Eventually, you buy a few big liners that you can float in international waters, and you’re in business. No strange new technologies or contraptions from Burning Man necessary. (If you send me donations, I will not buy a boat. I will just pay my land-based rent, but don’t let that stop you.)

In lieu of escaping the conspiracy to live at sea, one can at least take a cruise now to talk and hear lectures about various purported conspiracies, thanks to the “ConspiraSea Cruise,” my friend David Leibowitz informs me. I see there was an official from the LP on the last such cruise—not the remnants of Emerson, Lake, and Palmer now that Emerson’s passed away but rather the Libertarian Party, perhaps unsurprisingly.

There’s also an official Star Trek cruise now, featuring Shatner and various other actors from that franchise. If you ask me, that dismissed Arkansas juror should be a speaker on both these cruises. That subcultural crosspollination could be just the thing to inspire people to begin a new life and new civilizations away from our endlessly dispiriting terrestrial governments.