Kicked in Their Contrarian Asses

How protest made Yglesias and Chait anti-Trump. 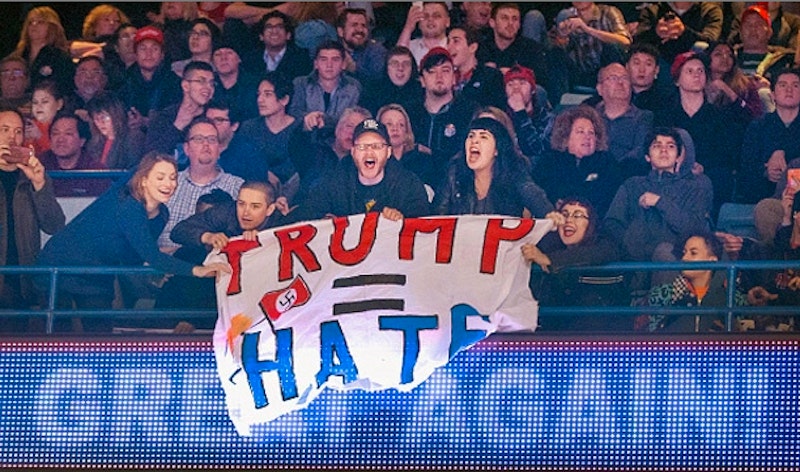 After Donald Trump canceled a Friday rally in Chicago amidst protests, pundits flapped their hands and declared the candidate's panicked last-minute decision to be a stroke of tactical genius. Reporters on the ground like Jamil Smith reported little violence, and the Chicago police department denied telling Trump to close the rally. Nonetheless, Trump lied and said the police made him cancel, and various pundits popped up to deplore the protests and declare that they had turned Trump into a free speech martyr. "Trump thrives on the political chaos that he helps create," fulminated Joe Scarborough. All resistance to Trump helps Trump. Abandon all hope.

Perhaps the rally solidified Trump support among those inclined to support him. But it lost him two lukewarm centrist defenders: Matthew Yglesias and Jonathan Chait.

Both Yglesias and Chait have gone on record declaring that Trump would be a better president than Marco Rubio or Ted Cruz because of his lack of fealty to Republican orthodoxy. Neither pundit would vote for him, but they’ve both written articles assuring left-centrists that Trump wouldn’t be too bad. He wouldn't gut climate change laws, they argue. He’d compromise on taxes. He might make the Republican Party more centrist and compromising. Trump, the contrarian left wonktocracy declared—not good, but not a dystopian nightmare, either.

But then, suddenly, they realized that maybe he would be a dystopian nightmare after all. Much as civil rights protests pushed Bull Connor to increasing violence, horrifying the nation, so the Chicago action caused Trump to ramp up. He tweeted a barely veiled threat that his supporters would violently disrupt Sanders' rallies. That was the end for Yglesias, who wrote a post declaring: "I can't be contrarian about Donald Trump anymore: he's terrifying."

Yglesias initially believed Trump would dispense with his fascist rhetoric and pivot to the center as the campaign went on. Instead, the protests just pushed him to greater extremism. That, Yglesias said, "has truly scary implications for how [Trump] might behave were he to actually win the presidency." The protests forced Yglesias to acknowledge what most of us had figured out months ago: Trump's a fascist demagogue, who’ll use the powers of the state in vindictive, horrifying ways if he gets the chance.

Chait, too, has been convinced of the danger of Trump, although, being Chait, the path to his awakening is more circuitous. Chait isn't so much horrified at Trump's fascism as by the sudden realization that Trump might excite and empower the anti-fascists. In the anti-Trump rallies, Chait sees the apotheosis of his perennial bogeyman, the PC left. Protest at a political rally, Chait feels, is an unconscionable threat to free speech, because, apparently, political protest against fascism is not part of free speech?

The logic is gibberish; Chait has to tie himself into knots lest he find himself cheering for protest by people of color, and thereby maybe validating them when they frequently tell him he's a centrist tool who supported the Iraq war. But however he spins it, the fact is that the street rallies forced Chait to recognize that Trump isn’t a normal candidate, and that his positions on climate change, whatever they may be, are largely irrelevant. Trump "is spreading poisons throughout the system that could linger beyond his defeat," Chait declares, as if he's stumbled upon some new revelation. Most people think that it's Trump's racism that could permanently scar the political system; Chait is worried about the backlash anti-racism, because he’s awful. But even awful people can recognize danger, if they get the right push.

The protests were that push. The point of protests isn't necessarily to convince the opposition; racist Trump supporters aren't going to stop being racist just because someone puts a banner in front of them. But protests can focus the attention of vacillating allies, and force people who want to play both sides to realize they have to choose one.

Yglesias and Chait represent the wonkish left; people who want to see themselves as reasonable, moderate, and balanced. Their impulse is to stay above the fray, ensconced in a bubble of bloodless pragmatism.  Protest lets such people know that that bubble can't protect them. Through organizing, protestors let vacillators know that Trump is an issue on which equivocating is not so much unacceptable as impossible. Faced with activists in the street, Yglesias and Chait reluctantly chose a side. I hope others like them will as well.