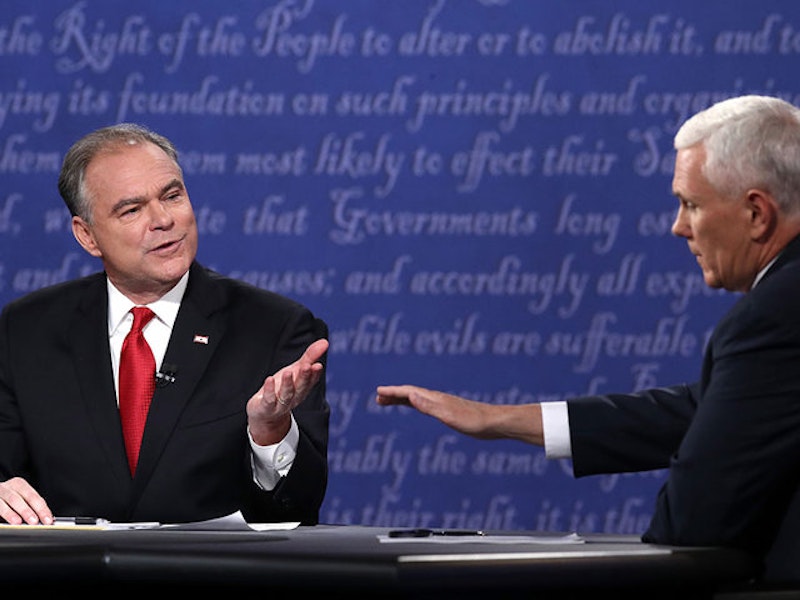 “There’s no doubt that Pence is a great performer,” tweets Jamelle Bouie of Slate. Well, “distinctly good,” I’d say. Mike Pence plays one key, that of the man who’s regretful but resolute. But he can do it no matter what and he shows no strain. Tim Kaine, by contrast, has a squeaky voice.

Who won the vice presidential debate? Certainly not Kaine, but possibly not Pence. There was a good deal of bickering and interrupting; to my ear the interruptions were feeble but determined on Kaine’s part, rumbly but indeterminate on Pence’s. In between Pence said the usual Reagan-era things about tax cuts and rebuilding the savaged military. Kaine brought up Donald Trump’s taxes and his history of stupid, brutal remarks. The Democrat didn’t have much to say about his party’s plans for the future. The Republican had platitudes about his.

Kaine broke through once. “Ronald Reagan said something really interesting about nuclear proliferation back in the 1980s,” Kaine said. “He said the problem with nuclear proliferation is that some fool or maniac could trigger a catastrophic event. And I think that’s who Governor Pence’s running mate is, exactly who Governor Reagan warned us about.” Kaine was right, and this is the key issue of the race. America’s two-party system has finally put forward someone too brutish and emotionally unstable to be president. Connect the dots of Kaine’s various attacks on Trump—the bigotry, the admiration for dictators, the angry post-midnight tweeting—and that’s the figure that emerges.

Pence denied and deplored these charges, and did so many times, but he skimped on debunking them. Instead he became sad. He may have been saddest when Kaine said Pence’s running mate might blow up the world. “Senator, senator,” Pence said. “That was even beneath you and Hillary Clinton. And that—that’s pretty low.” Kaine responded by asking about Trump’s stated preference for letting more countries get nuclear weapons (as opposed to keeping U.S. troops in those countries to protect them). Pence’s thoughts went elsewhere. “But let me go back to this Iran thing,” he said.

So far the pundits haven’t mentioned Kaine’s “fool or maniac” line. Perhaps Kellyanne Conway will spot the quote and tell Trump surrogates to raise blue hell, to treat it as another “basket of deplorables.” If not, one has to wonder. Possibly Kaine hit on a truth so raw that stating it doesn’t even count as a gaffe. Instead the statement becomes a blip; listeners’ minds can’t retain it. The Trump campaign had better hope that’s what happens. When it comes to the issue of his mental health, Trump’s greatest protection is the shyness people feel about saying somebody’s insane—actually insane and not figuratively. Complain about Kaine’s remark, give the topic more air-time, and the campaign brings us closer to the moment when somebody looks in the camera and says straight out that Trump is mentally ill. Kaine got a long way there, but he had to wrap the thought in a Reagan quote. By the end of the month, the wrapping may be off.

Final stages. Useful analysis from The Washington Post: “Pence made numerous statements that conflicted with positions taken by Trump. He suggested that Trump would not immediately deport all undocumented immigrants, that he believes military action is warranted to help the besieged Syrian city of Aleppo and that Russia is a dangerous country that must be dealt with aggressively by the United States.” In other words, Pence talked policy as if there were no Trump, and he hoped nobody would notice the hole in that approach. This seems like final-stage Reaganism. In its heyday the creed ignored the deficit and SDI test results. Today its acolyte ignores his own running mate, who happens to be the top of the ticket.