Why Is There a Women’s World Championship of Chess?

Chess is a mental game not requiring gender segregation. 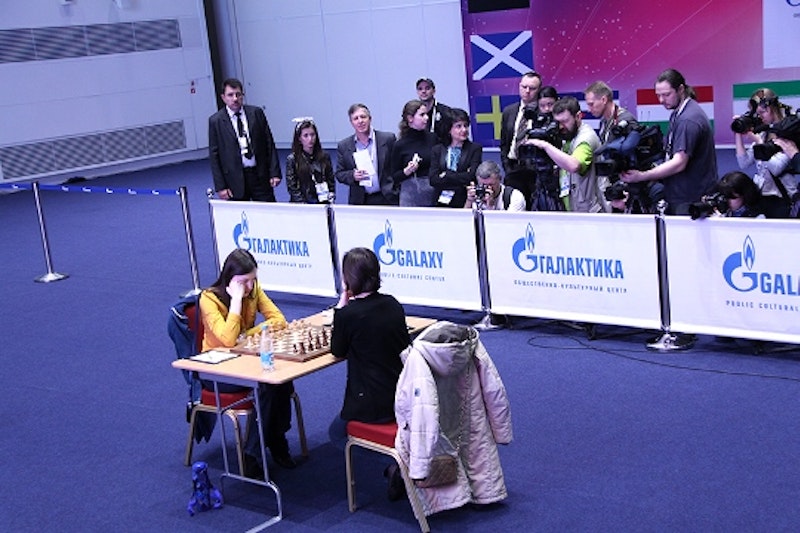 World chess governing body, FIDE, has decided to hold the 2017 Women’s World Championship of chess in Iran, a nation that's oppressed women since the Islamic revolution of 1979. A man made the decision. FIDE president Kirsan Ilyumzhinov isn't bothered that Iran’s not women-friendly, or that competitors of all religious affiliations (including “no affiliation”) will be required to wear the Islamic hijab to cover their “immodest” hair, a blatantly disrespectful act of religious subjugation.

Serious Islamic indignities imposed on women are given greater leeway by feminists than such Western patriarchal offenses as “manspreading” on the subway, perhaps out of the bigotry of low expectations, but if feminists were inclined to examine this issue, they might end up with a bad case of cognitive dissonance.

Women’s chess competitions provide an opportunity for women to gain public recognition, and feminists are all for such opportunities, but the very notion of women-only chess competition is inherently anti-feminist, in that it's all but conceding that men are superior at the game. This isn't much to admit when you're talking about physical games such as basketball or tennis, but what's the message when it's chess, a game strictly of the mind?

Is holding a separate, but unequal, Women’s World Championship an implicit recognition that a woman couldn't win the World Chess Cup 2017 (with no gender restrictions) to be held in the Georgian city of Batumi, on the coast of the Black Sea? And if that's the case, why?

Women have never made a mark in the highest ranks of chess. In the recorded history of the game, there has never once been a female world champion. Hungarian grandmaster Judit Polgár, now retired, is generally considered the strongest female chess player of all time, having been the only woman in history to qualify for a World Championship tournament, which she accomplished in 2005.

Polgár, who reached the number eight position in the world chess rankings in 2005, rarely competed in women's tournaments, and never played the Women's World Championship. As she put it, "I always say that women should have the self-confidence that they are as good as male players, but only if they are willing to work and take it seriously as much as male players.

As chess is often thought of as a pure test of intellectual activity, some conclude that male dominance of the game is a sign of male intellectual superiority. Polgar’s quote, however, reveals that it's not this simple. Women haven't taken chess as seriously as men, and the pool of chess players contains many more males than females, so it's statistically expected that they'll lag behind in achievement.

Why are females less inclined than men to pursue chess seriously? Is there a biologically-based self-selection process involved? This would suggest there's an innate gender difference in the cognitive functioning required for chess excellence. Lawrence Summers, former president of Harvard, once took a lot of heat for saying something similar about why more males succeed in the science and engineering fields.

Some scientific studies have found males more represented in both the very high and very low ends of the IQ scale. While there is controversy over the accuracy of IQ as an intelligence measure, it does test for the abilities that would make one excellent at chess. If there are more high IQ men than women, this could be a factor, but it wouldn’t explain the utter dominance of men in chess.

There are no pat answers to the gender disparity issue in chess. Feminists, of course, blame it on sexism. Social determinism is involved, they say. Girls are encouraged to drop out of the game at a young age because “it's not for them.” Those who side with chess grandmaster Nigel Short, who said men are hardwired to be chess champions, say it’s because girls start losing at a young age.

There's an aspect of resignation to holding a Women’s World Chess Championship. It’s in direct conflict with the feminist ideal of exact equality between the sexes when the playing field is level, like it is in chess. Statistics might show that blacks are also underrepresented in the chess player pool, so does that mean there should a Black World Championship in chess too?

It could be said that women’s tournaments offer female chess players an opportunity to gain competitive experience and confidence, but if the “endgame” isn't to eventually compete against men then the message being sent to young girls is they can't aspire to greatness.

One justification given for gender-segregated chess competition is that it helps build the comfort level of female players, but this is antithetical to the nature of cutthroat activities like chess. Comfort isn't something to court in competition. In fact, it's exactly what you want to avoid, as it breeds complacency. Judit Polgár, who was a genuine feminist, always knew this, but until her way of thinking becomes the norm, women won't stand a chance against men at the highest levels of chess.