You don't need Stern to bring out the worst in Trump. 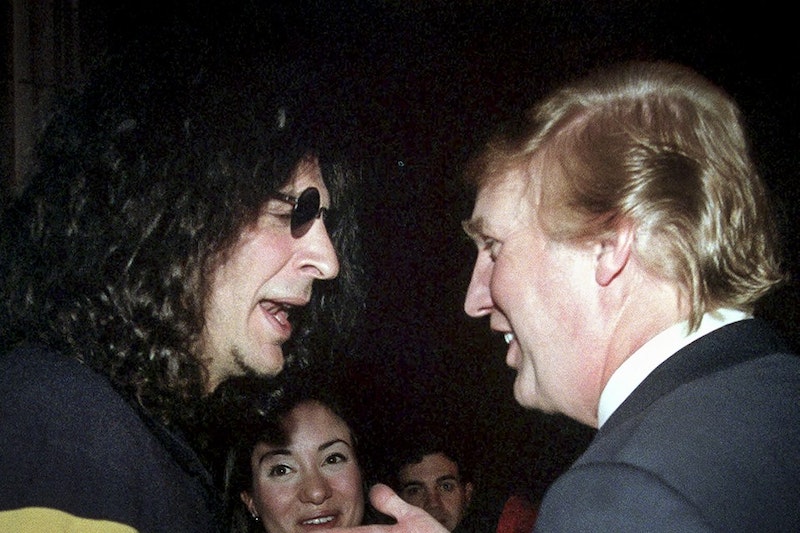 The writer Virginia Heffernan says Howard Stern had the drop on his old radio guest, Donald Trump. Stern, “a diabolically domineering scene partner,” would subject Trump to “rapid-fire questions, shot with plenty of torque, so as to elicit unwholesome revelations.” As a result, Heffernan says, Trump would get tripped up and embarrass himself with grotesquely vulgar remarks.

The theory goes down nice. Trump is indeed easily played, as both Hillary Clinton and Vladimir Putin have shown. And one likes the thought of Mr. Macho as baffled little lamb. Yet the theory is wrong.

Per Heffernan, stooging on Howard’s show was how Trump made it through his lean publicity years of the 1990s: “It’s important to remember that Trump in the period of his appearances on the show was deeply in the red.” No, the period extends well into the 21st century and Trump’s Apprentice years. In 2013 Trump was giving Stern his view of gay marriage (anti, but “it’s not my thing one way or the other”).

Second, opening his mouth on Stern did Trump no harm in his career as professional big man and business guy. Pre-2016, he caught no flak for calling Alicia Machado an “eating machine,” or for saying he’d like to do Cindy Crawford, or for giving his opinion of Lady Diana’s cup size, or even for saying he kinda sorta agreed with invading Iraq—“Yeeeah, I guess... so.”

With that last one, Heffernan acts as though Stern wrung a bombshell from his guest. There’s a tense play-by-play: “Trump suddenly seemed perilously close to teeing up an emasculated antiwar position. Stern saw an angle. ‘Are you for invading Iraq?’ Stern asked.” But Trump’s answer was no bombshell. If anything, it was the voice of America in September 2002: “Yeah, I guess so.” The answer became a problem years down the road. With Iraq a recognized disaster, Trump began saying nobody had been bigger against it than he’d been. The old clip gave the lie to this claim. But in 2002 the clip was a bit of nothing.

The Diana and Crawford remarks may fill out ads for Hillary, but so far the Machado comment (“eating machine”) hasn’t made the cut. There’s too much other material. Trump, with no Howard Stern in sight, forced a girl to go through a workout and called in the press to watch. He’s cruel and vulgar, and he’s a self-loving clod. And he’s voracious. Trump’s permanently ready to go, to launch his mouth and express his nature. If Howard Stern ever tempted him, it was to wave the dish of peanuts a second time. Nothing more’s needed.

To my mind, Heffernan puffs up on-air reaction to the comments (“audible shock,” “howls from his studio sidekicks”), and she mind-reads the Stern audience. “After an appearance like this one, the audience is left with the impression that Trump is more outside the realm of polite society than ever,” she writes, and those are poignant words. Heffernan seems to think that Trump’s aim is never to say anything that would make Virginia Heffernan think less of him. When he fails at this, she says he’s been spun around by Howard Stern. An example of a Stern triumph: “Trump has stooped to the show’s level of discussing every woman—and a princess, no less, who had recently died tragically—as though she were a stripper.” That isn’t “stooped,” honey. Trump lives at that level.