Why our next president won't be a cufflink. 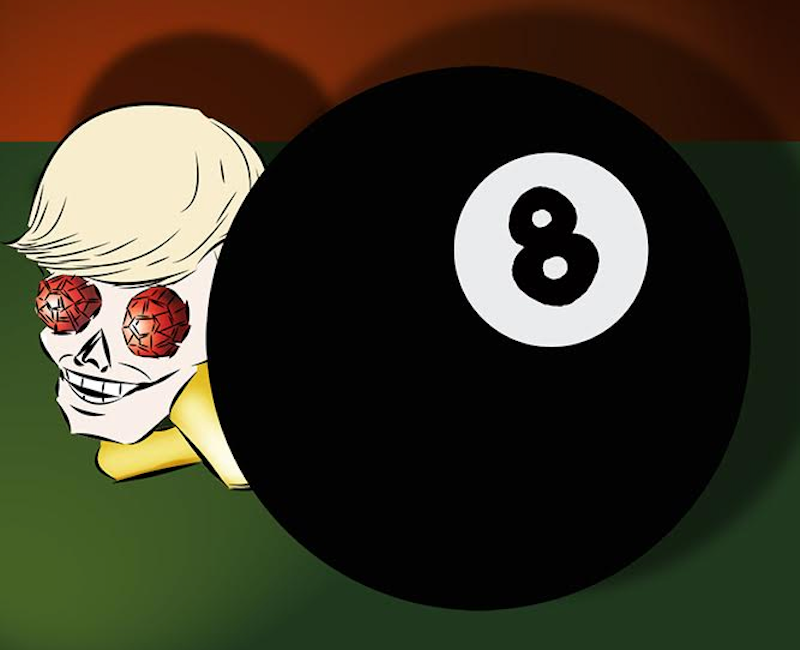 In a manner of speaking, one of the candidates is a ruby-eyed skull cufflink big as your head. We call him Swanky. And it’s never been more clear the winner of this election will be anyone but this flashy, oversized piece of men’s jewelry.

First, presumptive numbers don’t lie. No matter how the Alt-Right spins ‘em, the presumptive numbers, the numbers run by backroom boffins have gone full-blown bupkis for Swanky. Sure, any given day you might see and hear different numbers. But presumptive numbers are vastly different from, you know, like, regular numbers. Those can lie like a stained shag runner up the down staircase of a tenderloin flophouse.  Trust me. Presumptive numbers take everything into consideration. Like, everything. Kinda like a baker’s dozen with an inclusive standard deviation and a smidge of the horse you rode in on. Skewed, but robust, yet renewable.

Then there’s the matter of permission. Swanky won’t be allowed to be president. Out of the question. Would your parents have permitted you hoist your tricycle on top of the dinner table and drift donuts through the mashed potatoes? No. That wouldn’t be permitted. Would they let you snort all your milk, your brother’s milk, and their Bordeaux out of your nose all over a nice clean tablecloth? I don’t think so. Same goes for Swanky. No Presidency for you, Mr. Ruby-Eyed Skull Cufflink. No dessert either, unless you eat your lima beans.

Beyond permission, beyond the numbers, a little common sense reflection puts to rest any concern over the outcome of the 2016 presidential contest. I mean, is not life all about probabilities? Sure, you could wake up and find your Prius overnight morphed into a decaying Pontiac Sunbird with notes of Pall Mall, fortified wine, and Avon cologne from a container in the shape of a Koi. Not likely though.

More to the point, think of Swanky’s face printed bigger than life on your pillowcase. Yeah, with his mouth making that face and his little eyes staring holes through the back of your head. You can’t imagine bed linen like that. And the reason you can’t imagine such a pillowcase is the same reason why Swanky won’t be elected. Won’t, won’t, won’t.

Frankly, Swanky as President of the United States may well be the mother of all outliers. It’s a possibility as likely as doubting the moral superiority of 100 percent cotton. Or allowing yourself, if even for a moment, to wonder if organic vegetables are marked-up pesticide vegetables. Or referring to Wal-Mart as The Wal-Mart. None of this is going to happen to us. The prospect is unthinkable as WINGO in The New York Times. Or naming your newborn twins Surf and Turf. Or if any of these far-fetched things did happen to any of us, it would be a billion year event, sort of like a freak blizzard of candy corn changing to silver dimes at higher elevations.

Somehow, I think Swanky knows he’s got fat chance. The former sparkle in his ruby eyes now runs to partly twinkle. And really, who can blame him? What’s he gonna do for an encore? Run for Secretary General of Players’ Club? Be boss of everyone too smart to pay full price? Whatever warp in the zeitgeist brought the ruby-eyed skull cufflink big as your head to this point has about run its course. He’ll go through the motions.  He’ll bellow and bluster and call a jamoke a jamoke. But this Tweet is about out of letters.

So says virtually everyone who writes and talks for a living, and not a few who do it for exposure and recreation as well. These days, the hills are alive with the sight and sound of those three words everywhere you look and listen. Skywriting. Puppet shows. Cheerleaders. Etch-a-Sketches spontaneously spelling it out. Everything in the universe seems to agree, including every Eight Ball when turned upside down.