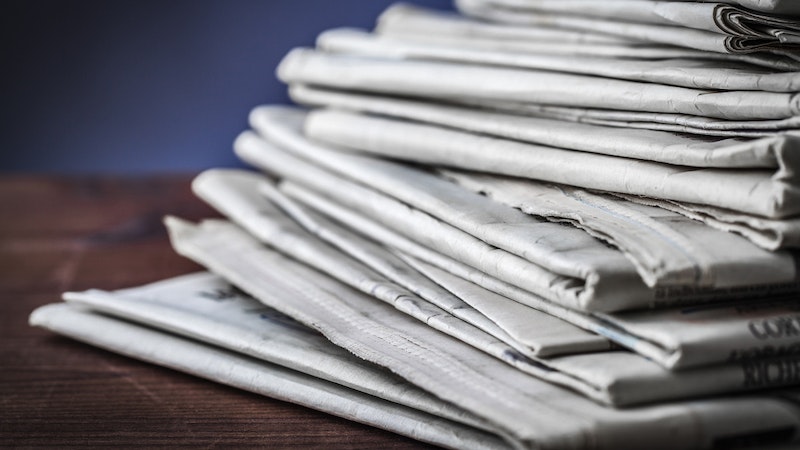 As I’ve noted before in this space, I still subscribe to the print editions of two daily newspapers: The New York Times and The Wall Street Journal. It’s not cheap, but if you want digital access, it’s the only option. Yesterday, Oct. 2, I noticed something in the Times’ “Review” section that gives you an indication that the company has all but given up on its print arm—and once the likely heavily-discounted advertisements dwindle further, the jig will officially be up—just by reading putative conservative Ross Douthat’s column. Headlined “Trump and the Intellectuals,” Douthat makes a plausible case that certain GOP “hacks,” as well as writers he’s “admired for years” are mistaken that Trump is a very flawed candidate but better than the Hillary Clinton alternative. Fair enough.

But here’s the problem: Douthat doesn’t mention a single “hack” or admired writer in the body of the column, rendering his words useless at best, dishonest at worst. I re-read the column online, and sure enough there’s a link to a “statement of support” for Trump from the group “Scholars & Writers for America.” Douthat is a mildly vocal #NeverTrump adherent, certainly his prerogative, but you’d think, as a self-appointed Big Thinker, he’d realize the omission of names makes him look incompetent. There are no surprises on the list—and I’ll get to them below—but that’s fairly irrelevant. It’s an example of journalistic negligence—and perhaps Douthat doesn’t care because he knows the print edition is dying—although I’d guess that not many readers care. But I did, and if the Times is willing to offer incomplete campaign coverage to its print readers, that’s a bird-flip that contradicts the still-pervasive, and flabbergasting, myth that the daily (the “Gray Lady,” and who can’t wait until that cliché is retired) is the most respected news source in the world. No stranger to clichés and lazy writing, Douthat writes parenthetically, presumably with a straight face, “yes, Virginia, there are worse things than the Iraq War.”

Douthat’s column concludes: “What Trump believes, what he intends to do in office—those questions are ultimately secondary to the problem of the man himself, and the near certainty that he will fail, and in failing, betray anyone who has lent him their support.”

I’ve no idea whom of these “scholars and writers” Douthat admires because he won’t say. I found the list underwhelming, with the exception of James Bowman, Steve Moore and Roger Kimball, but that’s simply a personal preference. Moore, for example, is a prominent and respected conservative, a former board member at WSJ (and still writes for the paper) and currently an economist at the Heritage Foundation. As a reader, I’d have been interested in what Moore had to say in response to Douthat’s thesis, or at least, know his reason for supporting Trump. It’s hard to keep a scorecard on what revered members of the conservative “intelligentsia” are in the Moore camp, or side with, say, Bret Stephens and Jonah Goldberg, two fine writers whose work I read every week.

Ultimately, it’s a Times editor’s fault (if in fact, NYT op-ed columnist are even edited, and judging by the work of David Brooks, Charles Blow, Gail Collins and Thomas Friedman, you’d have to think they’re not) that this particular Douthat column is intellectually dishonest. But Douthat is also culpable: he wrote the column and surely he knew that like a news story with no sources, his argument was thin without giving examples of the defiant Trump supporters. And providing a link on the digital version, while helpful, doesn’t excuse his lapse.