Another accidental president on the horizon. 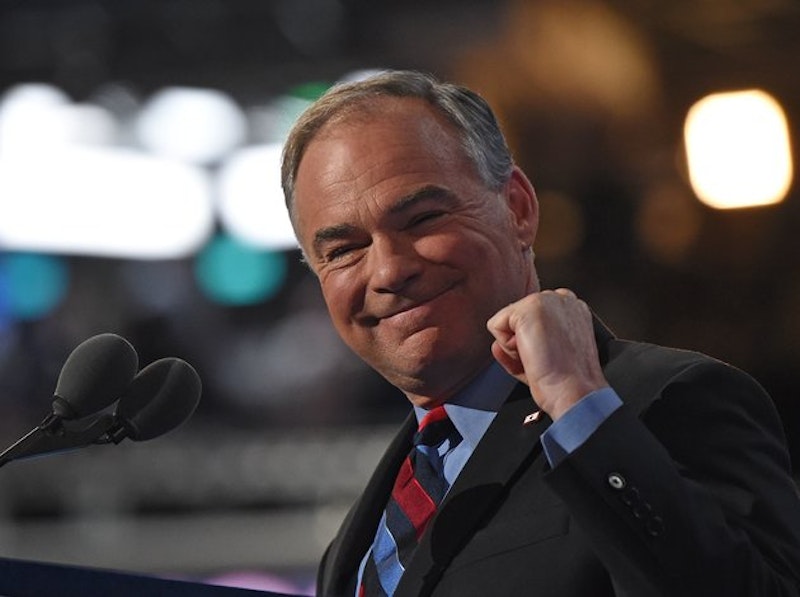 My power of political clairvoyance is middling—took home a lot of cash in ’94 betting on the GOP, then got skunked four years later—but really, how can the obviously ill Hillary Clinton continue on in this presidential campaign? First things first and back to Friday night when “The Deplorables” rocked the news media, even in its reduced state. It’s likely you’ve seen the offensive quote delivered with mirth at a New York fundraiser—inexplicably, the Clinton Machine allowed reporters to attend—but it does bear repeating. “To just be grossly generalistic, you could put half of Trump’s supporters into what I call the basket of deplorables. Right? The racist, sexist, homophobic, xenophobic, Islamophobic—you name it.”

Two weird factors here: one, if, as her campaign insists, Clinton was diagnosed with pneumonia earlier that day (yes, “pneumonia” is, when you’re an older sexagenarian, often a euphemism for other, more threatening diseases) why didn’t she cancel the fundraiser? It’s not as if she hasn’t held 1,000 of them in the past three months. And, a bit off-topic, you’d think her advisers might realize that mere money isn’t the weapon it usually is against a loony opponent like Trump. Two, didn’t Hillary learn anything from Marco Rubio back in February when the nervous Florida Senator, trying to recover from a crummy debate showing, descended into Trump’s cesspool and slung mud at the alleged billionaire’s suit jacket, which wasn’t even smudged. Rubio was through. The lesson is that although Trump’s made about 100 comments as offensive as Clinton’s deplorable “Deplorables” joke, he’s held to a different standard than traditional candidates. Moreover, Clinton saying that half of Trump’s supporters are scum only hardens his base—and turnout on Election Day—and gives straddlers some pause about the Democratic candidate.

That flub, of course, lost its legs on Sunday morning when HRC had to leave a 9/11 memorial service—man, talk about bad timing!—and collapsed into a waiting car. Even a portion of mainstream journalists, Democratic partisans, did a double-take, and wondered whether all the Parkinson’s Disease stories peddled by right-wingers weren’t so nutty after all.

The Spectator’s Freddy Gray, blogging not long after Clinton’s “medical episode,” wrote: “Americans will be asking themselves how, if she can’t make it through a memorial service, she will cope with the rigours of four years as Commander-in-chief… This will feed Trumpmania and excite the growing part of the electorate who feel the whole damned system is rigged.”

Around noon yesterday I texted one of my sons, writing, “President Kaine?” I suppose Gray was writing at that time, and he came up with the same conclusion (as did many others, though not for attribution). It’s an all-Hillary week and the Bernie Sanders diehards are insisting that if Clinton can’t continue, the entertaining Vermont socialist is entitled to the top spot. That won’t happen. Others, for whatever daft reasons, are offering Joe Biden as the alternative.

But as HRC’s veep selection, it’s Kaine’s show, and the self-admitted “boring guy” is no doubt licking his chops in private. At this point—though it’s only Monday and her health is an unfolding story—it’d take a Herculean effort to dislodge Clinton from the ticket. Bill Clinton, who doesn’t look so hot himself, must be working the phones furiously to shore up support, making promises and threats. But if sober Democratic officials take the pragmatic approach, and through whatever measures, force Clinton off the ticket in favor of Kaine, they might attain that landslide in November—promised just a month ago with Hillary—and win both houses of Congress as well.

There’s no Democratic downside with a Kaine substitution. He’s a practical, and malleable, centrist, who’s unburdened with all the Clinton baggage, and, unlike Hillary, is personable. Immediately, all the fence-sitters would have a reason to abandon Trump and, unless Kaine pulls a Jerry Ford in a debate, his election is all but assured. Because, as a growing amount of observers have said in the past two weeks—pre-Deplorables and 9/11 collapse—Hillary Clinton’s about the only Democrat who could lose to a wacko like Trump.

Tapping Kaine is the smart move: whether the DNC power brokers (and members of Congress sweating their own races) come to that conclusion is anybody’s guess. At least as of today.