Politics Worthy of the American People

The real America has re-emerged after years of repression. 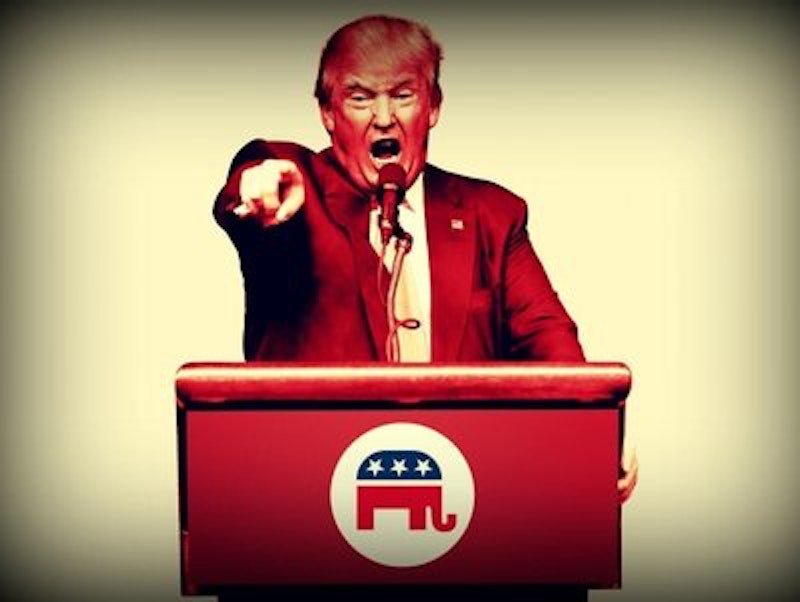 How has America come to this? There isn't a shred of dignity, decency, or discretion in the current presidential campaign. It’s a devastating indictment of where we are as a culture, as commentators on both sides are industriously insisting. True, but Lord this is a hell of a spectacle. No doubt it’s a terrifying disaster for our nation. I kind of love it, though.

Presidential politics has been bizarrely boring for a generation or two, but spectacle is what we Americans do best. We've always been a culture of barkers, self-promoters, embezzlers, yappers, scandal-ridden celebrities, Ponzi schemers, flamboyant junkies, throat-slitters, preachers of the prosperity gospel, liars, absconders, and bloated corpses. Finally, we have a politics worthy of our aspirations as a people.

Somehow, this year, the real America—huge and glowing with id, excruciating yet charming in its tastelessness—has re-emerged in the political realm after years of repression. There's no telling whom Trump might offend next, or why. He says his opponent is a crook who ought to be in jail, hints that she’s physically and mentally ill, ridicules her family and friends.

Meanwhile, the extreme hostility of the mainstream left is bursting out from beneath its blandroid surface: instead of just saying, “That motherfucker is fucking crazy,” they amass petitions from mental health professionals expressing their concern. Then they say he's fucking crazy. A fraud, a narcissist, a bigot, and so on.

The followers of Clinton are America-hating, politically-correct whiners, members of mediocre races and genders, artificially uplifted by affirmative action, who are destroying this nation. The Trump followers are a basket of deplorables, disposables, defectives. We've been going this way for a long time and now it's a straight national brawl or rumble, everyone talking trash, jacking up the gate, bristling with hostility.

She's passing out on 9/11; he's tweeting again against Gold Star mothers. Time itself is distending into October, but no one can be certain that either candidate will make it to the election, one way or another. Seriously, it might be Jill Stein by default by then.

This, I’d say, is closer to what America used to be, before we became just another Scandinavian socialist country but with apartheid. We are a big, brawling, crass people. We say what we mean, but don't really mean it, and keep yapping like that about our mom, and we'll bust you in the chops. We have the sexual mores of alley-cats. When we make a movie, it costs $200 million and grosses 100, but somehow we still get rich. $120 million is CGI explosions; 80 is catered opiates; that leaves $1.25 for the script. That’s who we are: an exceptional nation, the greatest country this world or any possible world has ever known or could ever possibly know.

For a long time, we’ve had a politics unworthy of our culture, people, and real ideals as Americans. We've pretended that Americans are polite, principled, full of pride. But that's not how we took over the world after all those colonial powers destroyed each other. We did it with an inspiring, toxic mix of bumptiousness and self-concealment, extreme self-esteem and rehab, cash and viral load, irrational prepossessions and special effects, ideals and mushroom clouds.

I don't know about great, but in this cycle we're definitely America again.