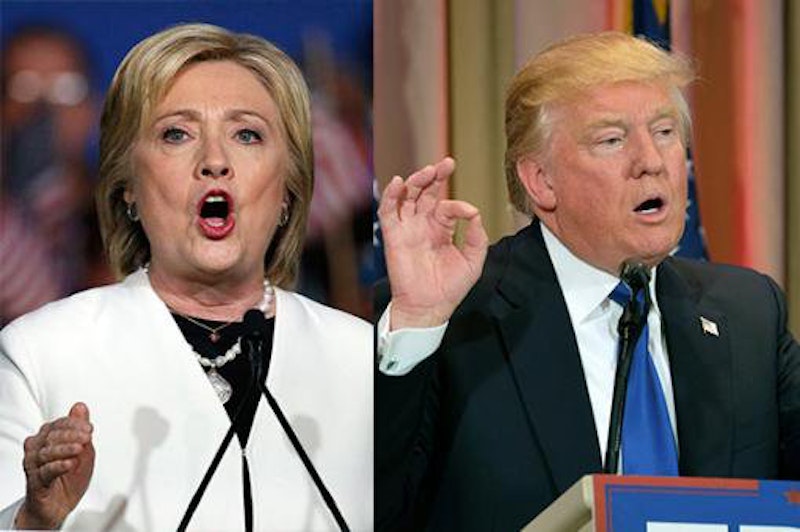 “She won’t drink water, and you try telling Hillary Clinton she has to drink water,” says somebody near the candidate. Apparently it’s tough to get the planet’s supreme white-collar woman to hydrate. The type loves hydration: it’s health advice that goes against the grain (who thinks of drinking all that water?) and yet is easy to follow (buy some water, drink it). But we learn that Hillary’s not a fan.

Facts: 11 months ago the candidate had her first debate with Bernie Sanders and had to hurry offstage during a commercial. She made it back just in time. “You know, it does take me a little longer,” she remarked. “That’s all I can say.” This was too much for Donald Trump, who still trembled from the event a couple of months later. “I know where she went,” he said. “It’s disgusting, I don’t want to talk about it.”

Theory: if Hillary drank as much water as a person needs, she might become known as the presidential candidate who’s always in the bathroom. Awkward podium waits would become a thing at her events, and people would have a repertoire of jokes for social media. Damage to the campaign would be minimal, but who wants to be the candidate who pees? We’ve never had one before, not going by the news. The status is just waiting for Hillary, the first woman with a shot at president, the first to joke in public about relieving herself. That time, when she made the joke, she was willing to be a sport. But she doesn’t want to get splatted by history, and a couple more episodes might do it.

Signed, Not An Embolism

Donald Trump almost had a good idea. “The fact is,” he told CNBC, “that they’re gaming the system, and I think, maybe, we should have no moderator. Let Hillary and I sit there and just debate because I think the system is being rigged so it’s gonna be a very unfair debate, and I can see it happening right now because everyone’s saying that he was soft on Trump.” Blah blah blah, etc. etc., because that’s how he talks, like a spigot that’s had a valve removed and now the rusty water puddles at your ankles and sprays in your face. But really, he and Hil shouldn’t have a moderator.

No, not to protect Trump. Of course, that’s the reason Trump favors. He argues that the liberals are working the refs, beating the drums for tough-on-Trump debate moderation. Okay, he says, how about no moderators? I say try it. The format would not work to his advantage. Instead America would be treated to an hour of rope-a-dope as he blathered down at Hillary’s head, followed by Stumpy (my affectionate nickname for his Democratic foe) rocking him back with some extended rejoinders.

But the big reason is this: moderators aren’t needed. Ask yourself why we have them. To pose necessary questions, to set time limits, to impose decorum? All this comes down to adult supervision. Two people want to run the government, but they can’t talk to each other on stage unless somebody else bosses them a little. I don’t buy it. Let the two talk and we’ll see what they make of each other. Let’s have free-range debates.

Signed, No Questions, No Moderators, No Rules

Colin Powell had this to say when he emailed an ex-aide: “Yup, the whole birther movement was racist,” Powell wrote. “That’s what the 99% believe. When Trump couldn’t keep that up he said he also wanted to see if the certificate noted that he was a Muslim.” Wow, 99 percent! That’s a bigger percentage of something or other (the American public?) than Hillary’s “half of Trump supporters.” Powell also emailed the following: “Or as I said before the 2012 election, ‘There is a level of intolerance in parts of the Republican Party.’” The email’s subject line was “racism.”

Powell sent the “racism” email in May and the “99%” email three weeks ago. “I have no further comment. I’m not denying it,” Powell told a reporter. Four years ago he said America and the GOP had a “dark vein of intolerance,” and this spring he said the vein was still there. But, as noted, he didn’t say “half,” let alone “basket” or “deplorables.” Hillary’s on her own with this.