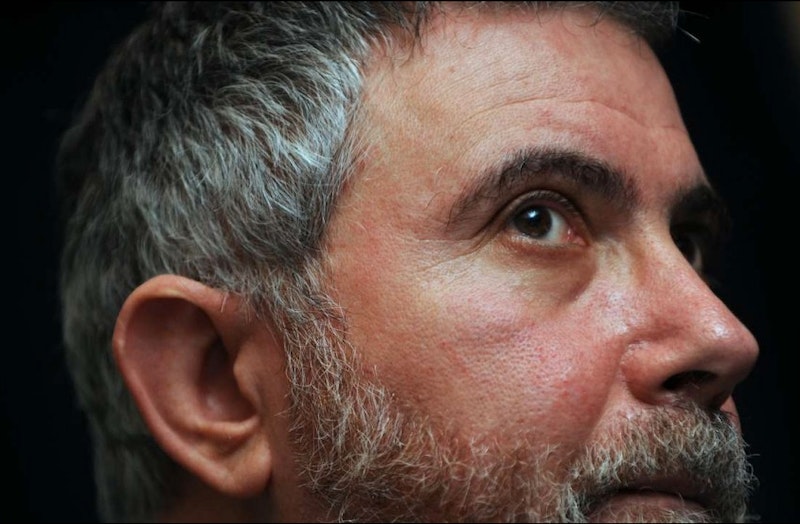 When did New York Times economic/political columnist Paul Krugman take leave of his senses? It’s hard to pinpoint, but I’d venture sometime in the early part of 2010, when the loosely-organized Tea Party threatened—and succeeded—in upending Congress for Barack Obama. Since then, the very wealthy Krugman, who still—still!—poses as an “ordinary American,” uses his semi-weekly platform at the Times to repeat the same message: Republicans are nuts, Democrats are upstanding public officials. Krugman, like so many of his media colleagues, has enjoyed himself immensely this summer as Donald Trump has zig-zagged from one gaffe to another, presumably indicating a Hillary Clinton landslide.

But now he’s getting antsy that Clinton will suffer the same fate he insists holier-than-thou 2000 candidate Al Gore did—lots of jokes at his expense, some fair, some not—and that Trump, like George W. Bush, will be graded on a curve by reporters eager for a tight election. His Sept. 5 column, "Hillary Clinton Gets Gored," opened on a ridiculous note: “Americans of a certain age who follow politics and policy closely still have vivid memories of the 2000 election—bad memories, and not just because the man who lost the popular vote somehow ended up in office. For the campaign leading up to that end game was nightmarish too.”

I’m of that “certain age,” and as I recall, it wasn’t just idiots (which Krugman implies) who voted for Bush. Bill Clinton fatigue was a factor, as was Gore’s imperious debate performances, and in the pre-9/11 era, Bush was a rare young GOP candidate, and one who was in favor of real immigration reform and social tolerance. Had his campaign manager Karl Rove—believing the election was in the bag—not diverted the candidate to wasteful appearances in California, for example, in the last week, and concentrated on close states, it’s likely Bush’s victory would’ve been clean.

In any case, it’s now 2016 and Krugman’s got the hives. He tweeted on Monday that his column might be hated by “journos,” but it was his “moral duty” to get them back in line. I’d no idea that Krugman had taken on the position of Conscience of American Journalists, but it wouldn’t be the first major appointment that’s escaped my attention. He writes: “So I would urge journalists to ask whether they are reporting facts [about Clinton] or simply engaging in innuendo, and urge the public to read with a critical eye. If reports about a candidate talk about how something ‘raises questions,’ creates ‘shadows,’ or anything similar, be aware that these are all too often weasel words used to created the impression of wrongdoing out of thin air.”

I’d agree that the current focus on Clinton’s health isn’t really cricket—unless she’s hospitalized—and it’s not as if Trump, a large, red-faced man, sometimes appears as if he’s about to stroke out. On the other hand, The Clinton Foundation, and its Byzantine structure, is fair game, even if Krugman believes it’s all above-board. And questions about Clinton’s shaking down the wealthiest Americans for campaign donations she hardly needs—while she ludicrously claims to be a Sanders-like populist who’ll throttle highly compensated men and women, although not in Silicon Valley—are fair.

Oh, and for good measure, yesterday Krugman tweeted (which caused some to justifiably ridicule him as a modern Pauline Kael): “Funny how enthusiastic HRC supporters, of whom I know many, are like a secret cult the media hasn't discovered.”

It can’t be said enough that the 2016 race is the weirdest election in modern times. Clinton could raise a trillion bucks and it wouldn’t matter: Trump and his supporters are immune to negative advertising. In the last couple of days, the latest round of polls have Trump gaining on Clinton—and part of a CNN poll has him leading—and those mean nothing either. Reporters and op-ed writers still haven’t received the memo that this election is an anomaly, that it can’t be covered in a traditional way. In my print version of the Times this morning (Washington edition), the lead headline was, “Trump and Clinton Begin Final Sprint to November,” hewing to the idea that the campaigns start moving fast after Labor Day. Maybe in statewide races this year, but not the presidential election.

My impression—and I’m as flummoxed about the dynamics of this contest as any other honest observer—is that the public will have a more clear idea about the November results after the first debate, September 26, between Clinton and Trump. Then again, I thought Trump was done after he slagged, more than a year ago, John McCain and other soldiers who were captured in battle.

Both candidates are just awful (and Libertarian Gary Johnson, as expected, has no shot), so whatever the results are on November 8, there’s no reason to celebrate. Should Trump win, however, I’ll at least have the consolation of Krugman’s deep despair.