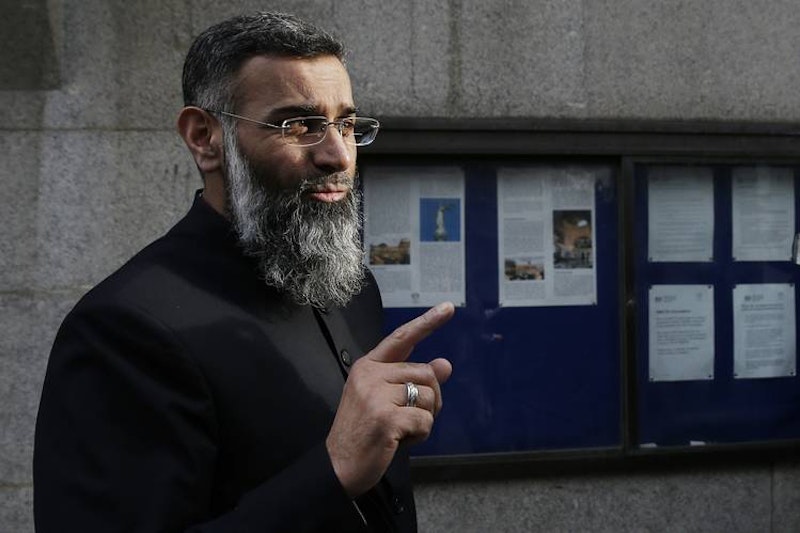 British Islamist cleric Anjem Choudary, who helped ISIS convince an estimated 500 British citizens to leave the U.K. and fight for it, received a sentence of five and a half years in prison on Tuesday, at the Central Criminal Court of England and Wales, after being convicted in July on one count of violating section 12 of the 2000 Terrorism Act. One count. The maximum sentence was 10 years.

While Scotland Yard struggled for years to produce enough evidence for the conviction, Choudary has spent the past decade openly proclaiming his support of Islamist terrorism within the U.K. and advocating that the British government be overthrown and its citizens forced to convert to Islam. Choudary’s lawyer told the court his client was remorseful, which is a lie. Choudary’s never expressed a word of remorse, and upon his release he'll continue to be a traitor to the country he was born in.

ISIS will celebrate this news. Their fellow jihadi has been given a slap on the wrist for what’s essentially treason, and the U.K. government has just sent out the signal that it’s unable—or unwilling—to defend itself from the threat ISIS poses.

How weak the U.K. must look to them now. Some experts say about half of all Islamist terror attacks carried out by Britons are traceable to the radical cleric or his Al-Muhajiroun organization. Choudary’s linked to the “shoe bomber” Richard Reid, the 2004 dirty bomb plot on the New York Stock exchange, the “7/7” bombings that left 52 people dead in London, and the plot to bomb the London Stock Exchange in 2010.

Compare how the Brits have treated anti-Islamist activist Tommy Robinson, who’s routinely attacked in the streets of hometown Luton by Muslims and widely hated outside of it, and you get right to the core the malaise the nation suffers from. Choudary’s never called a racist, even while calling for forced conversion of all U.K. residents to Islam, while Robinson is commonly just assumed as one.

In its reporting on Choudary’s sentencing, Reuters referred to the terrorist as the “outspoken British Muslim cleric,” which doesn't quite accurately describe the man. Wikipedia calls him a “social and political activist,” employing the same brand of political correctness that allowed the Rotherham child abuse scandal to unfold over 16 years. While the media and police focused on an ancient case of child sex abuse by singer Cliff Richard, men of Pakistani background were abducting, raping, and trafficking white girls (no Muslim girls) as young as 11 between 1997 and 2013 in the South Yorkshire city.

There's a good chance you never heard of the Rotherham scandal. Imagine if some members of Tommy Robinson's old group, the English Defense League, had systematically abused 1400 Muslim teenage girls over 16 years in such a depraved manner. You’d have heard about it by now. The British people, plagued by political correctness, are in a dangerous position. Now a well-spoken, educated terrorist who has a more posh accent than Robinson has played the government as suckers. A traitor to his country will soon be free. He’ll just have to deal with extra surveillance when he resumes his jihadism.

Anjem Choudary doesn’t represent British Muslims, most of whom are nothing like him, nor does he represent the vast majority of British citizens of Pakistani descent. The criminals in Rotherham don't represent them either, but the U.K. is so fixated on protecting the decent majority that they don't deal with the indecent minority. The U.K. might be striving for a multicultural utopia, but it needs to defend all of its citizens, especially the weak, as well as identify its enemies. The Choudary sentence tells me that's not the plan.