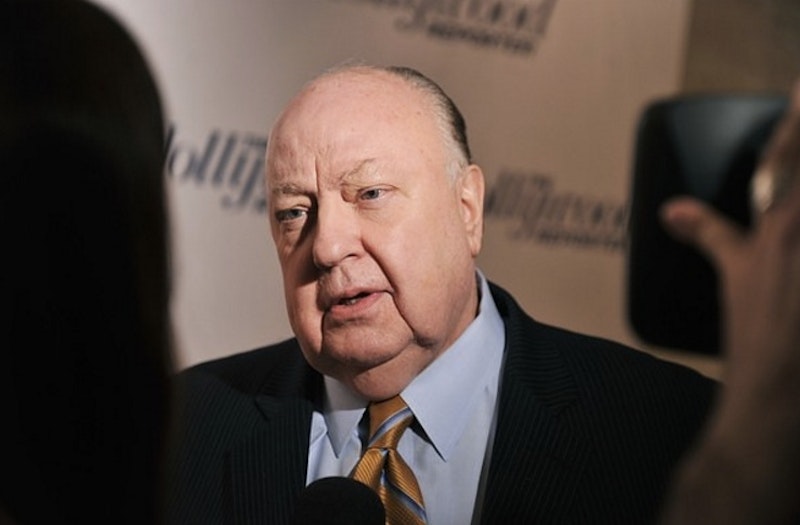 Gretchen Carlson signed a non-disclosure agreement. Maybe she has a tape of Roger Ailes saying “Then you’d be good and better and I’d be good and better.” If so, it looks like we won’t find out. The company that owns Fox News stepped in with a load of money and a public apology, and in return Carlson signed. “I’m ready to move on,” she said, vowing to “redouble my efforts to empower women in the workplace.” But, you know, I wanted to hear that recording.

Marveling over last week’s Carlson payout, blogger Kevin Drum writes, “Those must have been some tapes.” But consider this. Ailes was forced out July 21. The New York Times (citing “a person with knowledge of the settlement”) says Fox’s owners didn’t hear about any Carlson tapes until a week later. “Officials at 21st Century Fox became aware of the recordings about three weeks after Ms. Carlson filed her lawsuit,” we’re told, and she filed the lawsuit July 6.

Even before word of the tapes, the company wanted Ailes gone. Further, Ailes won’t pay Carlson a cent and hasn’t apologized to her. The money and apology came from 21st Century Fox, and they weren’t even being sued. So if any recordings weigh on Ailes, he hasn’t shown it. Also, if Carlson did have recordings, the logical time for her people to tell Fox’s owners would have been before Ailes settled, when the company’s negotiators could have used some leverage. Instead her lawyers waited until after.

Finally, I think Ailes would have spotted an iPhone positioned to record him. That’s how Carlson allegedly made the recordings. “According to a person familiar with the lawsuit, Carlson brought her iPhone to meetings in Ailes’s office and secretly recorded him saying the kinds of things he’d been saying to her all along,” we’re told by New York’s Gabriel Sherman in his Fox magnum opus, “The Revenge of Roger’s Angels.” But to get decent recordings, Carlson’s iPhone would have to have been out in the open. Ailes is a sociopath, and sociopaths are alert. All right, maybe the old creep was slipping.

“Revenge” was published at the start of the month. Since then the recordings’ existence has been treated as fact, not least by Gabriel Sherman. He repeated the claim a few days later, this time with no source to pin it to: “She had secretly recorded Ailes making harassing comments for more than a year.” The New York Times also reported that “another person with knowledge of the settlement” said Carlson had made recordings, and that one such recording was definitely the source of the “good and better” quote.

But we’ve never heard the tape. Meanwhile, a memo that runs counter to Carlson’s story has surfaced and been ignored. This memo, allegedly sent by Ailes to his top lackey a week after Carlson allegedly shot down the fat man’s alleged advances, begins, “I met with Gretchen and I think we’ll give it another chance,” with “it” meaning Carlson’s program. Admittedly, the memo hasn’t been proved authentic. Nor has it been disproven. It’s just blipped out of the story. Right-wing sites were excited when news of the memo came out, and now everyone has forgotten.

Even if Carlson doesn’t have a tape, large parts of her particular story could be true. In fact, I bet they are (for example, Ailes calling her a “man hater” and saying she needed to “get along with the boys”). I harp on the recordings for a couple of reasons. First, I don’t trust her. Carlson spent 10 years lying on-air for Fox News; she’d be doing it still if Fox would have her. If her lawyer says Carlson has recordings that none of us have heard or will ever hear, I’m going to be skeptical. Second, I think something bigger than the tapes is going on. It’s also bigger than the dislike felt for Ailes by the young Murdochs now running Rupert Murdoch’s empire. After all, Ailes had only a few months left on his contract. They could have waited him out; instead they rushed him out and paid him a lot of money.

Corporate leaders figure they can read trends. At the top of 21st Century Fox, the powers-that-be have a new imperative: pleasant relations with the planet’s white-collar women. Observe the line taken with Laurie Luhn and Rudi Bakhtiar. Both women spoke out after legally agreeing not to, but they figure what the hell. “What are they going to do?” Bakhtiar asked. “Come after me for money? Garnish my wages? It’ll make a bigger story out of it.”

Carlson’s non-disclosure may be made of sterner stuff, since her reported dollar payment is much higher than the other women’s, not to mention that apologies are rare for harassment victims. But the conditions that brought Carlson a fine settlement have brought the other women some lenience. Such are the times. The comet has come and Tyrannosaurus is dying. The young Murdochs who run Fox want to put Roger Ailes behind them. Who’d say they’re wrong? But I still have my doubts about that tape, and I’m sorry we won’t hear about the memo. Too bad none of this is going to court.