Ted Cruz's favorite comic character is better than he is. 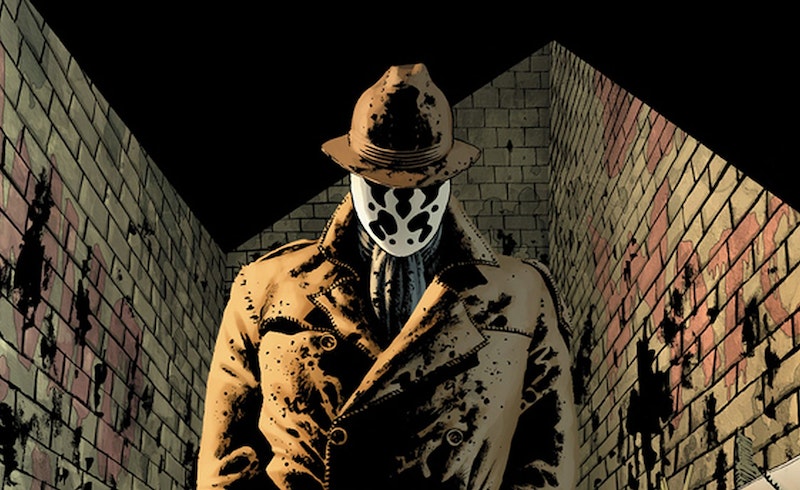 Sen. Ted Cruz is a notoriously unpleasant person; even his Republican colleagues despise him for his grandstanding. There's a certain logic in the fact one of his favorite heroes is a man known for his body odor, disgusting dietary habits, and not-even-borderline psychopathy. Rorschach is on Cruz's short list of great superheroes… which has led the nerd Internet to indulge in a certain amount of mockery.

That mockery has been a bit conflicted. On the one hand, Susana Polo at Polygon argues that Rorschach, in his grim brutality and monomania, is meant as a deconstruction of the grim avenger type of superhero. Cruz, in idolizing him, is missing creator Alan Moore's point, which is that superheroes are brutal thugs unworthy of adoration. Jeet Heer at The New Republic on the other hand, argues that lots of people like Rorschach, and that Moore made him too cool and sympathetic. Rorschach is the character who seeks out the truth, opposes the supervillain Ozymandias, and dies because he is horrified by the deaths of ordinary New Yorkers. "…despite Moore's intent, Rorschach becomes not figure of satire but moral center of book. And ironically reaffirms ideal of superhero," Heer insists.

Rorschach is one of my favorite superheroes in comics. I don't know why Cruz likes him, but I think Polo is wrong in seeing the character as unsympathetic, and Heer is wrong in seeing him as affirming superheroism. Instead, I think Alan Moore and David Gibbons set up Rorschach so that he’s sympathetic because he fails to embody the vigilante archetype that comic book readers, and Rorschach himself, set up as an ideal.

It's important here that Rorschach conceives of himself as two people. His secret identity is literalized in the book. Once he was Walter Kovacs, a weak runt who was bullied and unloved. Then he became Rorschach, a monomaniacal vigilante, remorseless and certain. At the beginning of the comic, he makes that remorselessness clear when he imagines a cleansing apocalypse. "The accumulated filth of all their sex and murder will foam up about their waists and all the whores and politicians will look up and shout "Save us!"...and I'll whisper "no.”

Rorschach sees himself as brutal and without emotion; he wants to be brutal and without emotion. But there are hints throughout the comics that he's not nearly as hard-hearted as he appears. In fact, his entire super-hero career is built on empathy. He decides to become a costumed vigilante after hearing about the Kitty Genovese murder, in which (at least legendarily) a woman was raped and murdered in Queens while apathetic neighbors looked on. He becomes, psychologically, Rorschach, discarding his Kovacs self, after investigating the disappearance of a young girl and finding that she was murdered.

Rorschach wants to be hard; he wants to be unmoved by pain; he wants to be the avenging angel. But he's a softy. And ultimately, when he's faced with the apocalypse for which he prayed at the beginning of the book, he quails. Ozymandias, the liberal one-worlder, is the guy who can look down and whisper "no." Rorschach is horrified at mass murder. He's not the judging uber-father: he's just Kovacs, the kid, who is motivated by empathy for others' pain. And so he takes off his mask and dies, not as Rorschach the superhero, but as ordinary Walter Kovacs.  Contra Heer, Rorschach doesn't validate the awesomeness of superheroes. Instead, he shows that the real superhero (Ozymandias) would be a supervillain, and that empathy, and decency, are only possible when you stop trying to be some sort of psychotic avenger, and take off the mask.

It's worth noting that Rorschach (like Cruz) talks a lot about the presidency. One of his idols is Harry Truman—who, of course, dropped two atomic bombs, killing in reality probably more people than Ozymandias is supposed to have in fiction. Rorschach's horror at the mass death in the comic is thus not only a repudiation of Ozymandias, but of Hiroshima as well. Rorschach, it's clear, is not man, or superman, enough to have dropped the bomb. Those who idolize those murderous overfathers may be psychopaths. But the overfathers themselves, sitting in the White House with their buttons and their bombs, are worse. Let's hope Cruz never gets a chance to get in that office and show how like, or unlike, Rorschach he is.