If Remain Had Won: Stepford Britain 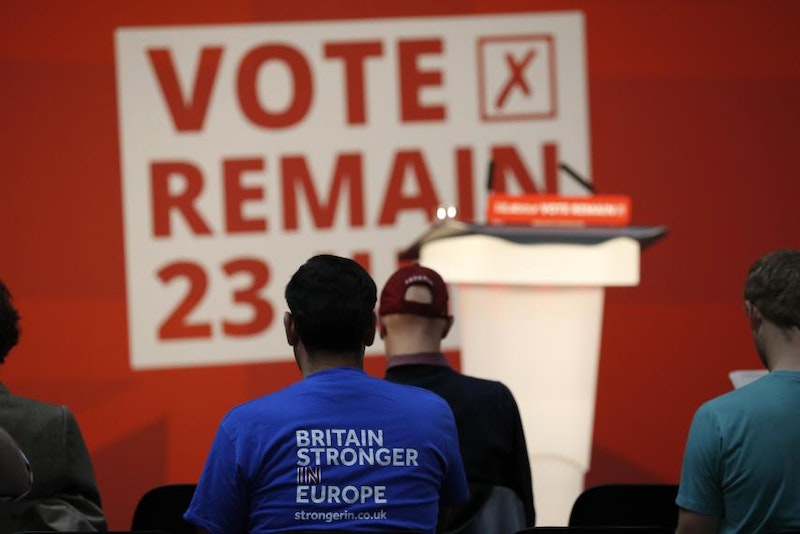 Imagine for a moment that the Remain camp had won the June 23rd referendum. What strikes me about the scenario is how crushingly boring it is. Can boredom be a good thing, economically and politically? If all’s well and we're unequivocally heading in the right direction, then boredom, arguably, isn’t bad. But the EU isn’t heading in the right direction, so in this case that sense of boredom is dangerous. It's a bus driven over a cliff while James Blake etherizes us on a loop in the background.

The other thing that hits me, in the imaginary Britain of a Remain victory, is how much less I know about my fellow Britons than I do now. Stepping in to this illusory alternative reality, where David Cameron has just given an overblown victory speech and had his mandate artificially reinforced, is like stepping into The Stepford Wives. Those immature young Remain demonstrators, who were seething and sobbing in the rain a few weeks ago, coddled in the bland stars and corporate blue of the EU flag—they aren't draped in federal imagery here in Remain Britain. Their spasms were reactionary, and now they've nothing to react against, and they're not actually interested in politics. They seem pretty normal here though, the kind of reasonable, metropolitan people who turned Cameron off half way through his speech, opened a bottle of craft beer and put on Game of Thrones. Just decent, middle-class citizens, with their flaws, faddishness, and groupthink, and merits—respect, modernity, and manners.

And that's what’s scary about this imaginary Britain: we never could’ve imagined what lay beneath the surface. How fortunate we’ve been, here in the real world, to see the reality—that the decency is superficial. How incredible it was when the do-no-evil, open-minded, liberal pretense was eviscerated—scorched to burnt vapor not by any kind of external assault, but by the searing heat of an internal, primal temper tantrum that had been incubating since they were first told how very special they are, and that there are no wrong answers. All opinions are equally valid, with the unfortunate exception of those poor people who don't understand the question.

This has been an epic reveal. What was the worst you could have aimed at this lot before? That they're vapid? Not that bad. Immature and narcissistic? Hardly a crime. But my god—look at what they've done since losing the referendum! Ageist, classist, anti-democratic, spiteful, intolerant, and inherently conservative. They've become a convulsing mass embodiment of everything they're supposed to be against, all because... they lost a vote!

At 38, I've never been on the winning side of an election, yet not once have I suggested that we limit suffrage and run the thing again. These forward thinking, open-armed, internationalist brothers and sisters are dictatorial zealots, and have the gall to suggest that it's the other side that are stupid. So, imagine that Remain had won the referendum. Might you have had a suspicion about what existed out of sight around you? Might you have supposed that the polite, young man across the street who stares at his phone a lot thought you were an ignorant racist and wanted to have you removed from the electoral roll? Would you have considered that they voted for an undemocratic political tightening not because they want to change it from the inside, but because it resonates with them?

I wouldn't have had such suspicions, and so I'm glad for the Leave result not only because it's the best choice, but because it has shone an unforgiving and brilliant light on the simmering, sinister perversities that have lain widely unperceived in the hidden creases of young, middle-class Britain for at least a generation.