When the World’s Turned Upside Down

In the wake of Trump’s victory, we must keep asking, “What now?” 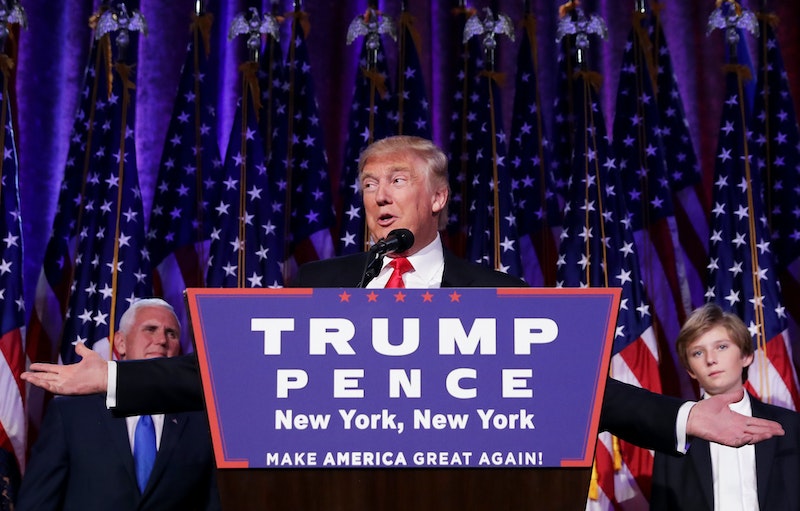 I haven't been able to write for the past two weeks. For the last few days, I've slept, on average, less than four hours. I've been on social media reposting news stories. I've had financial discussions, reconsidering my previous five-year plan, researching the potential implications Donald Trump’s administration will have on my professional life. I've had conversations with friends, family, work contacts, former students, hearing "Why?" over and over and responding, "That's not the question you should be asking. The real question is, what now?"

What now? We need to ask. The world needs to ask. But no one actually knows what the answer will or should be. Of the many articles, posts, op-ed rants, and analyses I've read recently, Tobias Stone's “History Tells Us What Will Happen Next With Brexit and Trump” is the most trenchant. He argues that Trump is the harbinger of a destructive phase that emerges every few generations, though most people can't see it coming because they only have a 50-100 year historical perspective and the contributing factors are highly complex. Still, he doesn't offer answers beyond a certain fatalism: these death throes are an inevitable aspect of history, a kind of Kali Yuga that comes around again and again to burn through humanity with blood and fire. Moreover, there’s no way to see what shape this Ragnarök will ultimately take.

Stone writes, “The number of possible scenarios [that could lead up to a phase of rampant destruction] are infinite due to the massive complexity of the many moving parts.” It's hard to disagree with this, given the labyrinthine international alliances that a (competent) U.S. administration must regularly navigate. The dizzying amount of uncertainty that surrounded the Trump campaign before the election has now engulfed the United States and, by extension, the globe. On November 9th, Gérard Araud, France's ambassador to the US, voiced what the entire world was thinking: “After Brexit and this election, everything is now possible. A world is collapsing before our eyes. Dizziness.”

What now? We keep asking because we must—through the tears and recriminations, through fears and loss of friends, through the resurgence of the Klan and college students in the South parading around in black-face, through demonstrations becoming riots and riots becoming widespread dissidence, through those moments of doubt, standing in front of the mirror, asking, "Did I do this to my country? Did my country do this to me?" We keep asking, but I suspect that when the answer comes it won't assuage the heartbreak.

Michael Moore thinks that Trump won't last long in office, that he's essentially unfit, something a lot of us have been saying for a while. But I wonder how much better Mike Pence will be if Trump resigns, gets impeached, or does the world a favor from the top of his Central Park tower. Tobias Stone sees Trump as merely the avatar of a persistent historical force. Therefore, if not Trump, then Pence, if not Pence, then perhaps Paul Ryan or someone comparably good for the country.

I read that Newt Gingrich wants a new House Un-American Activities Committee as a way to begin Trump's Muslim purge. Does this surprise anyone? No.