Everything could’ve been different, the super-progressive asserts. 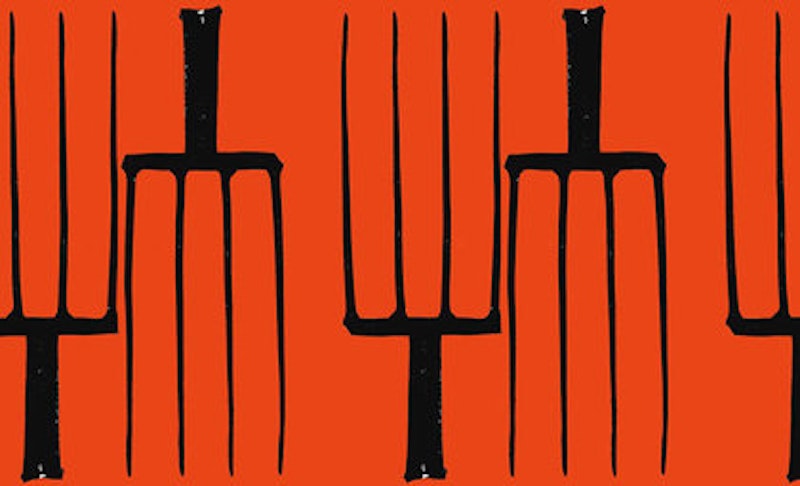 Left-wing hero Thomas Frank (What’s the Matter With Kansas?) says President Obama played rescue squad for the old order. He tells readers at Salon that Obama's credo comes down to this: “We're the only thing between you and the pitchforks.” Frank assumes there were pitchforks, which seems kind of a leap. People get mad enough to shake their fists, yes. But to dismantle institutions? Most of us step carefully there, especially if the institutions contain our money. Yes, we're suspicious of the damn things, but we're very anxious about their health.

Frank's article—the ferociously named “Right-wing obstruction could have been fought: An ineffective and gutless presidency’s legacy is failure”—presents the Age of Obama as “a time when America should have changed but didn’t.” Obama kept it from changing, Frank says—he put the brakes on. Or, to use Frank's metaphor, Obama is the “awesomely talented doctor who kept the corpse of a dead philosophy lumbering along despite it all.” The headline writer disagrees with Frank, preferring “ineffective and gutless” to  “awesomely talented.” But the headline writer wasn't paying attention. Frank doesn't think Obama got rolled; he thinks Obama helped roll everybody else.

Either way, Republicans could block legislation almost at will. Isn't that central to figuring out how much Obama could pass? Frank scoffs. “In point of fact,” he says, “there were plenty of things Obama’s Democrats could have done that might have put the right out of business once and for all—for example, by responding more aggressively to the Great Recession or by pounding relentlessly on the theme of middle-class economic distress.” Not even “in fact,” but “in point of fact.”

All right: “responding more aggressively,” as with a bigger stimulus plan, would have meant legislation. But the Republicans can block legislation; that's the problem we're dealing with here. Nor do we know that making more speeches about the great middle-class shafting would have made lawmakers vote the right way. We do know that Frank, less than 200 words before, commented dourly that Obama had made “so many rousing speeches” on “rising inequality.” Wouldn't those count? But they were just speeches, and “pounding relentlessly” is something else. Speeches get made, and sometimes they work and sometimes they don't. Pounding relentlessly takes place somewhere special, inside the skulls of pundits contemplating speeches that should have been made.

Frank's “plenty of things” for breaking the hammerlock devolves into two things, one that Obama has done and another that can't be done until after the hammerlock is broken. No wonder the headline writer didn't pay attention; Frank wasn't either.

Bloggers have a phrase for an argument that relies on assertion of vast, unspecific verities. It's called hand-waving, and by that standard Frank's piece is like wharfside near the Queen Mary. I'll point at some big verities too, and you can see how they line up with your sense of things. First, systems don't just topple, they topple somewhere and on top of somebody, and that somebody is us. Everybody knows this except people—like super-progressive journalists—who can get money and/or attention for hyperventilating their beliefs to the contrary. The result is that the dull people who vote are more cautious and slow-footed than super-progressive journalists would like. If the Crash of 1929 and the Scare of 2008 brought Franklin Roosevelt and Barack Obama, that's not because voters wanted revolution.

Frank says Obama took one look at a tottering system of fraud and repression and decided to prop it up. I guess. On the other hand, the world economy and American society didn't go sky high like one of the trucks in Wages of Fear. They might have done that while we were breaking up banks and agribusiness companies and putting honest people in fear for their savings. If Obama used the brakes, my guess is that the steering mechanism was kind of shot and the engine on fire. That doesn't scare Thomas Frank, but he doesn't seem all that on the ball. In point of fact.