Politics is no longer the art of the possible. 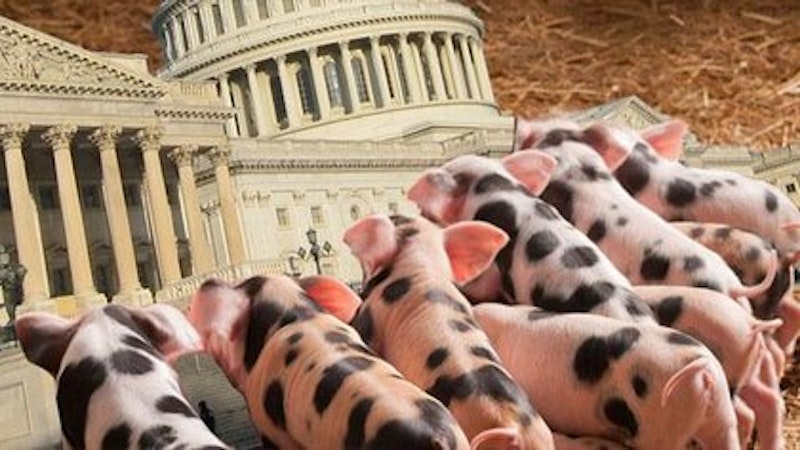 Sometimes the bad old days look pretty good. Those were the times when business was done with a wink and a nod and good politicians stayed bought. And more often than not, a little grease got things done. A bridge here, a highway there, maybe a park or a patronage job or two, and before you knew it a major piece of legislation was on its way to becoming law.

But the current crop of Republicans in Congress decided to change all that. They eliminated earmarks, those harmless but costly amendments members of Congress used to attach to legislation that suddenly blossomed into major public works projects back home. Pork is no longer power. And Congress no longer functions.

Politics is supposed to be the art of the possible. Taking politics out of politics may sound like a noble pursuit but it’s actually a losing cause. And those who suffer most are the very people who’re supposed to benefit from all of the shenanigans and hijinks in legislative bodies, the people back home. The nation’s roads are crumbling, its bridges are dangerous and in disrepair and the business of America is at a standstill while a few amateur one-note elected officials attempt to purify the process.

This is not a case of political taxidermy or a nostalgic longing for simpler times. But it illustrates when things got done without the interloping hands of thousands of lobbyists, corporate personhood, an activist court that doesn’t give a damn about people, campaign money run amok, 501(c)(4) shadow committees and the arcane rules of governance that were written by a bunch of dead men. Anything’s better than the stalemate we have now.

President Lyndon Johnson was able to win over the support of reluctant Southern legislators for Medicare by raising the peanut import quotas, giving Southern peanut growers an advantage on the world markets. And in a fit of rage against Sen. Frank Church (D-ID) for his habit of cozying up with reporters, LBJ thundered, “The next time you need a dam in Idaho, call Walter Lippmann [the eminent Washington columnist of the era].”

Closer to home, Maryland, during the 1960s, elected three of the most powerful members of Congress. There wasn’t a combined eighth grade education among the three Baltimore Congressmen, but they got things done and brought home the pork chop.

Fallon’s committee was, in part, responsible for the Interstate Highway System, though the coast-to-coast roadway has many who claim fatherhood for the system. And it was Fallon’s committee that delivered the Maryland section of I-95, the last public works project dedicated by President John F. Kennedy before he was assassinated.

The Maryland Congressional delegation helped to deliver the sprawling Social Security complex to West Baltimore County and drew LBJ here to dedicate one of its several buildings.

For Maryland, geography is destiny. The state has been generously sprinkled with federal pixie dust. We send our tax dollars to Washington and in return we get the National Institutes of Health, Edgewood Arsenal, the National Security Agency, the Bethesda Naval Hospital, the Social Security Complex, Fort Meade, Aberdeen Proving Grounds, the Census Bureau, the Centers for Medicare and Medicaid Services, NASA’s Goddard Space Flight Center, Fort Detrick, Camp David, Patuxent Naval Air Station, Andrews Air Force Base, the Food and Drug Administration, the U.S. Naval Academy and others. Fully 26 percent of Maryland’s workforce is employed by some level of government and about 250,000 of them are federal workers.

At the state level, the Baltimore Metro System was less about transportation than it was about rewarding the building and trades unions for their campaign financial support. Here’s how it was done.

Winning passage of controversial legislation is more often a matter of pluck than skill. In the waning days of the 1970 session, the Mandel Administration needed one vote in the Senate to enact its showcase transportation reorganization bill. It had been promised the vote of the late Sen. Joseph Bertorelli, of Baltimore, who had been partially paralyzed by a stroke.

On the night of the vote, Bertorelli complained that he was feeling ill and was going home to Baltimore. But lobbyists for the Administration took charge in an unconventional fashion. They hid Bertorelli’s wheelchair until after the vote was taken. When the legislation was passed, with Bertorelli’s vote, the senator was given back his wheelchair so he could go home. Bertorelli’s state-provided driver at the time, incidentally, was none other than election maven Gene Raynor.

The proposed Purple Line in Montgomery County and the Red Line in Baltimore City are costly public works projects that will determine transportation patterns in the future and reward unions in the present. The problem is that the funding formula has changed. Baltimore City, for example, must come up with 50 percent of the money or more than $1 billion. That much cash could be hard to find in the impecunious city.

Wouldn’t it be nice to have Mimi DiPietro around for laughs at his malapropisms and as a case study of how the system was designed to function. Mimi, the irrepressible Baltimore City Councilman, used to bill himself as the “king of patronage.” He once boasted that he delivered 2500 city jobs, mostly in the Department of Public Works, to his constituents, many of them immigrants, in his East Baltimore precincts.

And the Maryland General Assembly performed more efficiently when there were fewer lobbyists and more of the likes of Sen. Harry “Soft Shoes” McGuirk and Del. Paul Weisengoff, both of Baltimore City, who perfected the art of the deal and understood how to extract a favor for the cost of democracy in action. There used to be about two dozen lobbyists registered in Annapolis. Today, there are nearly 1000.

W. Dale Hess, majority leader of the House of Delegates summed up legislative business succinctly. During a floor debate on the need for a second Bay Bridge, Hess, also noted for his malapropisms, defended Gov. J. Millard Tawes’ bridge proposal: “This deal ain’t no different than any other deal the governor got us into.”

There’s a statement by the late Sen. Joseph Staszak, a Baltimore tavern owner, who was asked by another senator during a floor debate if his vote for a liquor bill was a conflict of interest. Staszak replied. “How does that conflict with my interest”?

John Marshall Butler, a Maryland Republican Senator (1951-63) had his own solution to international problems. When the Russians launched Sputnik into space in 1957, Butler stood up on the Senate floor and proposed, simply, shooting it down.

Nobody ever summed up the dance of legislation better than a long-ago Delegate, Xavier Aragona, of Prince George’s County. In the heat of a complex debate, Aragona rose from his seat and intoned: “This issue is beginning to degenerate to a matter of principle.”