Republicans Need to Get Rid of the Religious Right 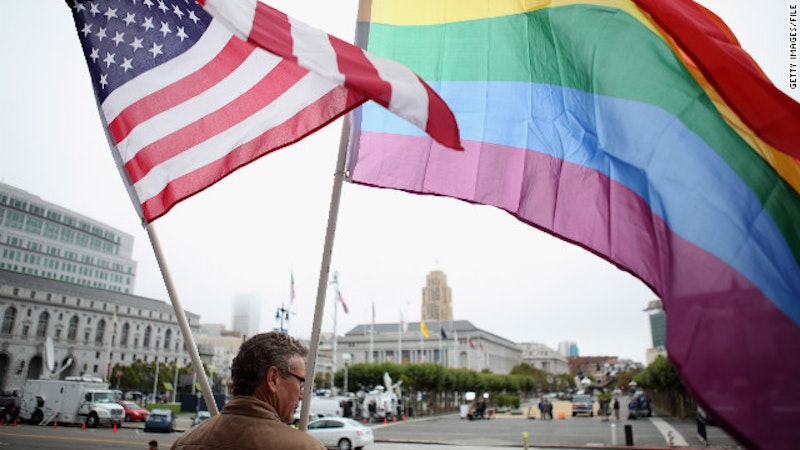 Edward R. Ward, author of Where Memory Gathers: Baseball and Poetry, once shared advice he gives people starting new jobs: “On day one, find out where the freaks are, and sit on the other side of the room.”

As valuable as Ward’s advice is for aspiring careerists, the people who are currently in the most desperate need of it are those who run the Republican Party. Outside the vortex of dysfunction and chaos that is Washington, D.C., in states and cities with Republicans in control—low taxes, light regulation—limited government leadership has crawled back to life, while Democratic governors and mayors seem intent only to polish the headstones on the graves of their local economies.

An intelligent comparison of Texas to California, Wisconsin to Illinois, and Indianapolis to Detroit reveals the superiority of economic freedom to government expansion. The American people and media should concentrate on economic recovery, with an antenna tuned to those Republican voices already leading their people toward higher ground.

Instead the Republican Party and conservatives—in politics and in the media—continue to sit with the freaks, and then wonder why more Americans aren’t eager to join them. Just like no one is going to remember the charming personality of a guy who shows up to a wedding with mud stains all over his white shirt, no one is going to pay close attention to the winning employment and entrepreneurial ideas of someone who is tickling the gag reflex of his audience with retrograde thinking, better left in a museum of the 19th century.

The Texas Republican Party recently adopted a platform that included “conversion therapy” for turning gays into heterosexuals. The Texas unemployment rate is 5.2 percent, but the insanity rate in the Texan GOP will receive more headlines from the national media. The governor of the Lone Star State, Rick Perry, should enjoy a hero’s welcome wherever he appears in the media, because it is under his leadership that Texas has turned into an economic juggernaut. As long he continues to liken gay people to alcoholics, however, as he did recently before attempting to retract the remarks, most journalists, and more importantly, young voters will view him as a dinosaur.

While on the subject of the media, any rational and reasonable conservative should pound his head into the wall when considering the recent gallery of weirdos, fanatics, and frauds that Republicans have elevated to national prominence. Ben Carson, an impressive neurosurgeon, is politically disastrous, unless his intention is to shock people too skeptical to believe that doctors can make statements of staggering stupidity. Since becoming a household name, Carson has denied that biological evolution accounts for the origin of the species, has compared homosexuality to bestiality, and has declared the ongoing Veterans Affairs fiasco as a “gift from God.” After all, what difference do a few dead veterans make if the cause of their deaths can serve Carson’s political agenda?

As if the rejection of established science, the recycling of medieval prejudices, and the exploitation of dead veterans weren’t enough to satisfy Carson’s sense of rhetoric and morality, he recently upped the ante with the trivialization of 9/11. In response to a direct question from a Fox News host, “Is Obamacare worse than 9/11?”, Carson said, “Yes, because 9/11 is an isolated incident.” Any Republican not demanding that Carson apologize to the 9/11 victims’ families and then forever stay out of any room with a television camera is unworthy of the American people’s trust or confidence. Many Republicans, however, are still pushing Carson to run for President. He’s an all-star on Fox News, and conservative publications regularly run his columns.

Ben Carson is simply the latest in a long line of Republican embarrassments, from Sarah Palin to Cliven Bundy—all of whom carry the common chains of Christian conservatism.

A recent Gallup poll shows that the number of American who believe religion is “old fashioned and out of date” is at 30 percent. Up from seven percent in the 1950s and 21 percent in the 1990s, the number is still shockingly low for a wealthy and educated country. Americans might limp down tracks where the rest of the developed world runs, but eventually they will catch up and the politicians who clutch on to hurtful and prejudiced ideas will continue to lose the support of the American people, even if their fiscal policies are effective.

The graveyards are full of anti-gay creationists, but the future belongs to smart, libertarian-minded Republicans who can combine the economic promise of freedom with the social and cultural liberation of freedom. Rand Paul, the supposed libertarian hero, will prove more of the same, as he has to answer for his absurd opposition to same-sex marriage, and his extreme opposition to abortion even in cases of rape and incest.

Republicans will continue to lose national elections until they do some work in cultural studies. The religion issue is the largest stink bomb polluting the Republican National Convention, but there is a suicidal gap between Republican politics and Republican engagement with the culture. Their dismissal of the Affordable Care Act provision of allowing young Americans to stay on their parents’ health insurance policy until the age of 26 demonstrates Republican cultural illiteracy. More and more twentysomthings are living at home and finding it difficult to secure gainful employment. Republicans, however, resorted to the old rhetoric of “entitlements” when explaining their position. Much of the Republican rhetoric was useful and accurate 20 years ago, but the economy, the beliefs, and the demographics of America have changed. The cultural illiteracy of the GOP is the biggest obstacle the next Republican nominee will find in front of the White House.

Culture not only precedes, it produces politics. Until Republicans understand that elemental truth of history, they will continue to fade into irrelevancy, and the country will suffer because of it. A first step toward relevancy is the one that places distance between the Republican politician and the conservative minister. Only then will an increasingly secular and socially liberal young America consider the wisdom of the Republican economic agenda. The gay couple growing a pot plant in their backyard would benefit as much as anyone from lightening the tax and regulatory burden, and making it easier to operate a business and buy a home. Economic freedom knows no boundaries or prejudices, and it is rational. Republicans have to embrace cultural and social views, and visionaries, that don’t contradict, but complement that message.

Republicans have the right policies to heal America’s wounded economy, but no one is going to listen to them as long as they are sitting on the same side of the table as the religious right—the freaks in the room.

—David Masciotra (www.davidmasciotra.com) is a columnist with the Indianapolis Star. He is the author of All That We Learned About Living: The Art and Legacy of John Mellencamp (forthcoming, University Press of Kentucky).