This Race Has the Highest-Profile Candidates of Any Local Election

Sheila Kuehl vs. Bobby Shriver for the Los Angeles County Board of Supervisors. 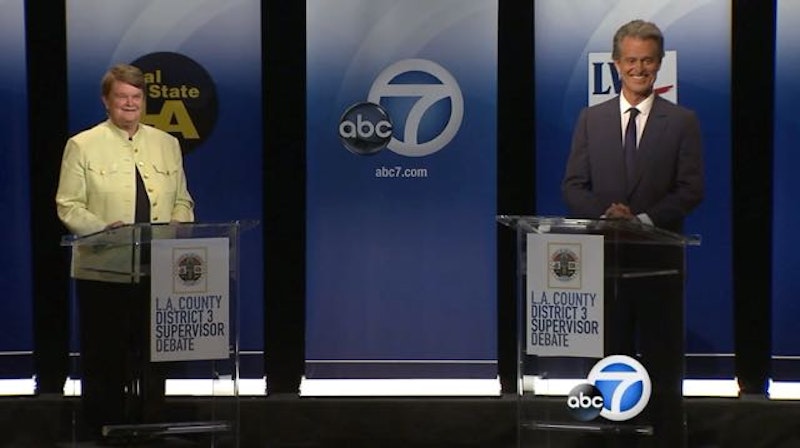 A seat on the Los Angeles County Board of Supervisors might sound small-bore for a prominent former state lawmaker and Kennedy scion, but an race for this local-but-influential California office has become a high-profile contest between two politically boldface name candidates.

Sheila Kuehl, the first openly gay state lawmaker, is seeking the coastal seat taking in some of Southern California’s most affluent and star-studded communities. So is Bobby Shriver, son of Peace Corps Founder Sargent Shriver and Special Olympics head Eunice Shriver, and a nephew of President John F. Kennedy.

Not surprisingly, both are Democrats. They’re squaring off because of California’s “jungle primary” system—approved by voters and first used in 2012—which pairs the top two finishers in a race against each other, regardless of party.

An L.A. County Board of Supervisors seat doesn’t have the high-wattage of serving in Congress, as governor or even statewide elected office, but there’s a reason a Kennedy heir and pioneering gay rights activist want the office.

“The Los Angeles County Board of Supervisors manages an annual budget of about $25 billion and 10 million constituents,” The Los Angeles Times wrote in June. “Supervisors wield both executive and legislative powers, and are in charge of implementing county, state and federal programs. They administer the budget of the independently elected sheriff and are in charge of dozens of departments and serve on boards providing law enforcement, emergency response, health care, welfare, affordable housing, environmental protection, animal protection and mass transportation.”

Kuehl and Shriver are both well-known political commodities with Ivy League pedigrees, although they’re not the only prominent politicos chasing a Los Angeles County Board of Supervisors seat. Kuehl, 73, was a child actress (she played teenaged genius Zelda Gilroy on The Many Loves of Dobie Gillis.) She graduated from UCLA and Harvard Law School. She went on to serve in the state Assembly for six years and the state Senate for eight years after that.

Shriver, 60, is an East Coast transplant with a golden political pedigree. The Yale and Yale Law graduate worked as a venture capitalist before becoming a film producer—her work includes True Lies, which starred future California Gov. Arnold Schwarzenegger, whose ex-wife is Shriver’s sister, Maria. Bobby Shriver went on to serve on the Santa Monica City Council for eight years, including a stint as mayor in 2010.

The pair is running to replace longtime Supervisor Zev Yaroslavsky. The district includes most of the San Fernando Valley, as well as West Los Angeles, Bel-Air, Beverly Hills, Brentwood and the Pacific Palisades.

In an eastern L.A. County district, former U.S. Secretary of Labor and Congresswoman Hilda Solis has a clear shot to a Board of Supervisors seat. President-elect Barack Obama tapped Solis as labor secretary eight years after she came to Congress representing a heavily Latino district in Eastern Los Angeles County that includes a growing Asian community.