He gives them too much credit. 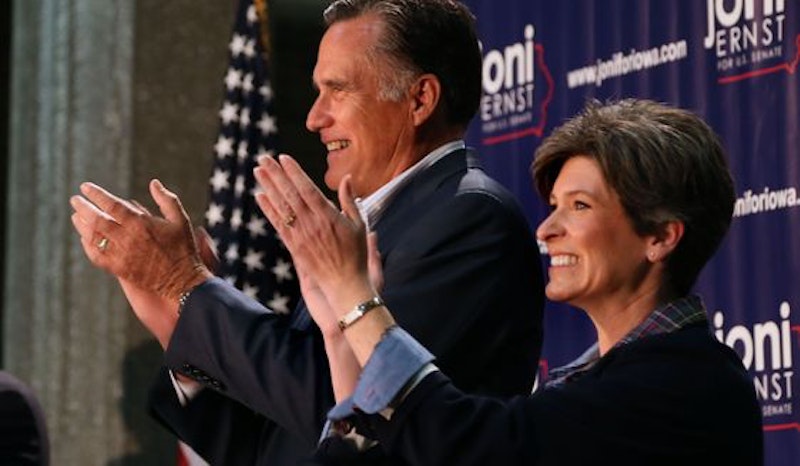 Why do Republicans hate Obamacare? Is it because the program won't work? Because it restricts individual freedom? Because it will make it harder to get health care, in their view? Or what?

New York’s Jonathan Chait thinks he's found the secret answer. Wacko Iowa Republican Joni Ernst (in a close Senate election with Bruce Braley) declared recently that Obamacare is bad because, "Once we start with those benefits in January, how are we going to get people off of those? It’s exponentially harder to remove people once they’ve already been on those programs… we rely on government for absolutely everything." Obamacare is bad because the government shouldn't be giving people benefits, including, in this case, healthcare.

Chait concludes that Ernst is channeling something primal in the Republican id. "That’s the fundamental belief that motivates most, if not all, conservative opposition: Health care should be a privilege rather than a right." Republicans believe, Chait says, that "the inability of some people to afford the cost of their own medical care is their own problem." The fact that people are struck down randomly by illness simply doesn't matter. If you get sick, deal with it. That, Chait concludes, is the (morally contemptible) reason that Republicans oppose health care.

Chait's argument isn't convincing. First, in her original quote, Ernst isn't actually saying that people who get sick can just go off and die. Instead, she starts babbling about the good old days when sick people were cared for by their families and by charitable organizations and churches. "They used to have wonderful food pantries. They used to provide clothing for those that really needed it," she enthuses. She dislikes government health care because she has an idealized vision of personal charity, and worries that the first interferes with the second. This is painfully stupid, in my view (food pantries are going to help you if you get cancer? what?) But it isn't the same as saying "Health care should be a privilege rather than a right."

Also, Chait's argument that most Republicans oppose Obamacare erases the fact that most Republicans don't necessarily oppose Obamacare. The program is based on Republican proposals; Mitt Romney, who supported them, was the last Republican presidential candidate. Yes, he had to publicly repudiate "Obamacare" to get the nomination, but that’s not evidence that Republicans have long rejected state support for health care of any sort. For that matter, changes to Medicare (government health care) are widely opposed by the aging Republican base. And even changes to Obamacare don't have that much Republican support, if Sen. Mitch McConnell's positive mutterings about the Kentucky Obamacare program are any indication.

The main reason Republicans oppose Obamacare isn't because of an overarching ideological belief that sick people should die in the street. It's because Obamacare is the signature achievement of a Democratic president, and the GOP in the age of FOX identity politics defines itself not by any particular position, but by hating Democrats.

It's certainly true that health care hasn’t been a GOP priority for some time, and it's also true there are libertarian-leaning people in the GOP coalition who are ideologically opposed to government health care. But I see little evidence that that's a majority position in the Party. On the contrary, the lack of a focus on health care for Republicans is due to the fact that they're increasingly the party of the old, and the old already have health care through government-provided Medicare, so there's not much incentive to worry about it for anyone else.

As a political pundit, Chait naturally assumes that other people follow politics and think through their political positions. But they don't. Most Republicans, like most Democrats, aren't ideologues—they pay attention to politics only tangentially, and form most of their opinions based on partisanship. The overwhelming majority of Republicans hate Obamacare because it's got Obama's name on it. And we'll see the proof of that when Republicans get into power and keep most of Obamacare intact—while declaring they've utterly changed the program and it has nothing to do with Obama, of course.