Once a Season: An Okay Paul Krugman Column

The Times pundit doesn’t have his heart in the Amazon controversy. 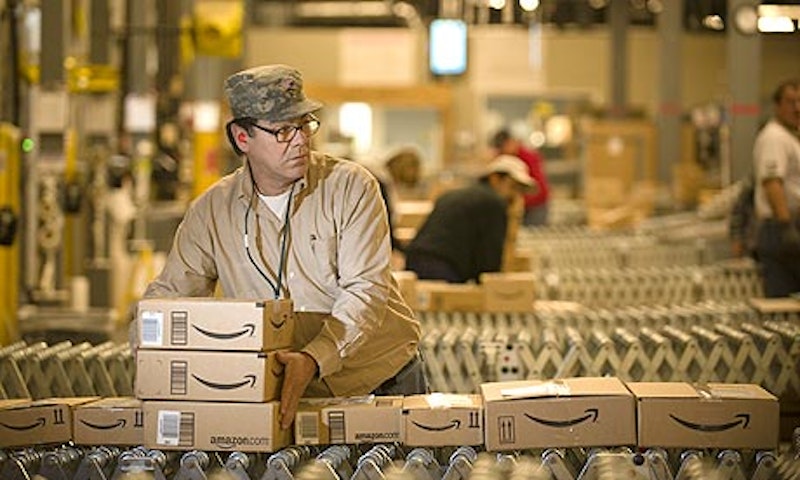 Here’s a rarity: I read every single word of Paul Krugman’s New York Times op-ed on Oct. 20. I didn’t agree with much of Krugman’s thumb-sucking about the ubiquity of Amazon.com, but he didn’t bow down before Barack Obama once, didn’t demonize a single Republican (or, in his view, stupid GOP voters) and didn’t, from his millionaire perch, preach about income inequality. It was a safe zone for those of us who believe that while Krugman’s undeniably intelligent, he’s become increasingly unhinged, month-by-month, since—let’s be generous—around this time in 2010. Krugman’s economic and political malarkey still sells in certain quarters: he’s leaving his post at Princeton for a lazy schedule at CUNY (one graduate course) next year, for which he’ll be paid $225,000.

Krugman believes, like much of the Manhattan/Beltway/West Coast cognoscenti, that Amazon has grown too powerful and must be stopped. He doesn’t say how Jeff Bezos’ company ought to be punished in the marketplace—maybe because Bezos could be his employer in two years?—just that it should. It’s rare that Krugman doesn’t offer a specific remedy to what he sees as wrong, and that’s one reason the column made for, if not exactly pleasant, curious reading. And, credit Krugman, notoriously stingy with self-disclosure, for stating upfront that he’s an Amazon Prime member and “uses it a lot.” Additionally, he dismisses New Republic editor Franklin Foer’s Oct. 27 bout of tomfoolery on Amazon as “over the top.” And how! Foer, who doesn’t say whether or not he uses the online service, claims Amazon is poised to collapse the economy. The two-page spread that illustrates his article, indicts all of us who are Amazon customers. It reads: “If You Like Amazon, You May Also Like: The Gilded Age, Starving Artists, Sweatshops, Walmart and C. Montgomery Burns.” Nice touch: “starving artists,” as opposed to starving Americans. Foer’s jeremiad was widely dismissed, even by liberals who actually read it, and did TNR no favors.

So back to the mild-by-comparison Krugman on the subject of Amazon. Like a lot of authors, Krugman is ostensibly pissed off over the pricing squabble between Amazon and publisher Hachette, a frequent conversation at swank cocktail parties, I imagine. Never mind that those who know Amazon dwarf the percentage of Americans—even those who buy and read books—who’re familiar with Hachette. I wish Krugman had mentioned the Clinton Administration’s penurious antitrust lawsuit against Microsoft in 2000 (which, not coincidentally, coincided with the dotcom bubble burst), but then again, I’m sure he was in favor of that.

Like many book-readers, I mourn the loss of independent bookstores (as well as independent retailers in general), where you could usually browse at will and make an hour or two of it. But as a middle-aged consumer, I also wish that print publications hadn’t fallen victim to the Internet: in many ways, it’s just not our world anymore. I’m also an Amazon Prime member and order frequently, sometimes for books, but mostly for DVDs and CDs. Barnes & Noble, the dying chain—which in the 1990s shuttered many independents—has deals on books, but their pricing on DVDs is insane, as are the mark-ups on vinyl records (a new attempt at increasing revenue), so I’ve little sympathy for that company. In Baltimore City, there’s one terrific stand-alone, Soundgarden in Fells Point, that’s cheaper than Amazon, and often has earlier release dates. I hope this excellent store survives.

The following is where Krugman’s elitism loses me:

Book sales depend crucially on buzz and word of mouth (which is why authors [like Krugman and his friends] are often sent on grueling book tours); you buy a book because you’ve heard about it, because other people are reading it, because it’s a topic of conversation, because it’s made the best-seller list. And what Amazon possesses is the power to kill the buzz. It’s definitely possible, with some extra effort, to buy a book you’ve heard about even if Amazon doesn’t carry it—but if Amazon doesn’t carry that book, you’re much less likely to hear about it in the first place.

Not buying, Paul. I never dig into the entrails of Amazon, too time-consuming, and I hear about books from other sources, which Krugman doesn’t mention. Such as Twitter, Facebook, ads in magazines, book reviews (in print and online) and the like. If a new book is noteworthy (for good or bad), Amazon can’t kill its “buzz.”

Krugman concludes: “What matters is whether [Amazon] has too much power, and is abusing that power. Well, it does, and it is.” For Krugman, that’s a half-hearted growl, which is why I don’t really think he cares one way or the other about the fate of Amazon. It’s not really his beef: which is probably the reason why I found this particular column way more palatable than his usual politics-disguised-as-economic frothing at the keyboard.