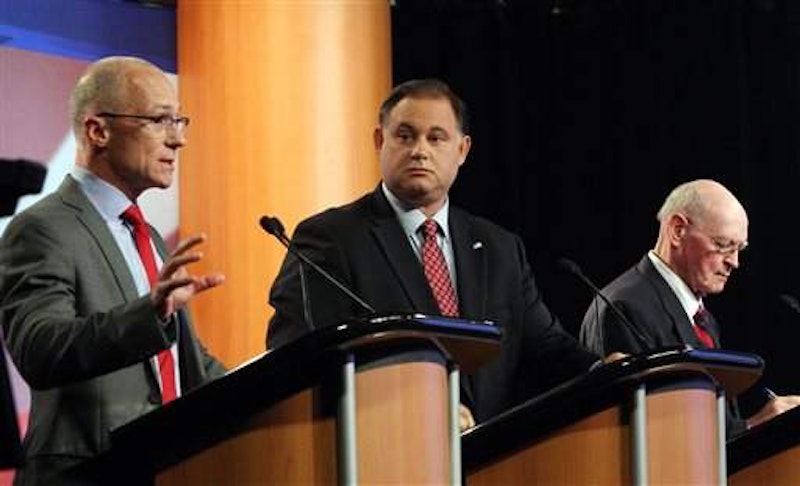 New Hampshire, once a rock-ribbed libertarian-conservative stronghold, is now politically schizophrenic. But due to shifting demographics, depending on the national mood, sometimes Democrats dominate, other times Republicans.

Former Rep. Frank Guinta, a Republican, is hoping it’s his turn to be on top. Guinta is running to reclaim the Seacoast-based House seat he won in the 2010 tea party wave, then lost two years later when President Obama easily won the Granite State’s votes and the national election. Standing in Guinta’s return path to Washington is the woman he ousted four years ago then lost to in 2012, Democratic Rep. Carol Shea-Porter. She’s been one of the more liberal House members during her two stints in office. The former anti-Iraq war activist first got herself elected in the 2006 Democratic sweep as a Nancy Pelosi acolyte, before the act wore thin in the swingy district.

The rubber match so far is breaking down along familiar party and ideological lines between Shea-Porter, 61, a one-time social worker and community college instructor, and ex-Manchester Mayor Guinta, 44. A recent debate sparked verbal fireworks, writes The Associated Press.

“Guinta criticized Shea-Porter for voting for the Affordable Care Act, which he said isn't working in New Hampshire because thousands of people were not allowed to keep the private insurance plans they had. While in Congress, Guinta voted to repeal the law. Shea-Porter asked Guinta how he could justify taking health care away from people, including those with pre-existing conditions, by repealing the law. Guinta said he'd like to see market-based solutions to lower costs.”

The New Hampshire 1st District seat isn’t likely to affect who wins the House majority, which analysts consider safely in Republican hands. But it represents a broader trend in New Hampshire politics, in which both parties stand a fighting chance of winning big-time elections. That’s a change from the days when the Loeb family’s publication of pugnacious conservative political views in The Union Leader newspaper reflected local sentiments to a large degree. Now “most of New Hampshire is part of the Boston metro area, and like most non-Southern metro areas, it trended Democratic in response to the Republicans’ conservative stands on culture issues,” writes the 2014 Almanac of American Politics.

New Hampshire’s other House member, Ann McLane Kuster, is a Democrat. So is Sen. Jeanne Shaheen, who faces a spirited challenge this year from former Sen. Scott Brown, who previously represented Massachusetts. The state’s governor, Maggie Hassan, is also a Democrat. The outlier is Republican Sen. Kelly Ayotte—though put together New Hampshire is the first state ever to have an entirely female congressional delegation and a governor to boot.

Polls show the Guinta/Shea-Porter re-rematch to be about even. With the New Hampshire district’s close political balance, it could be a late Election Night before it's clear who wins the rubber match.