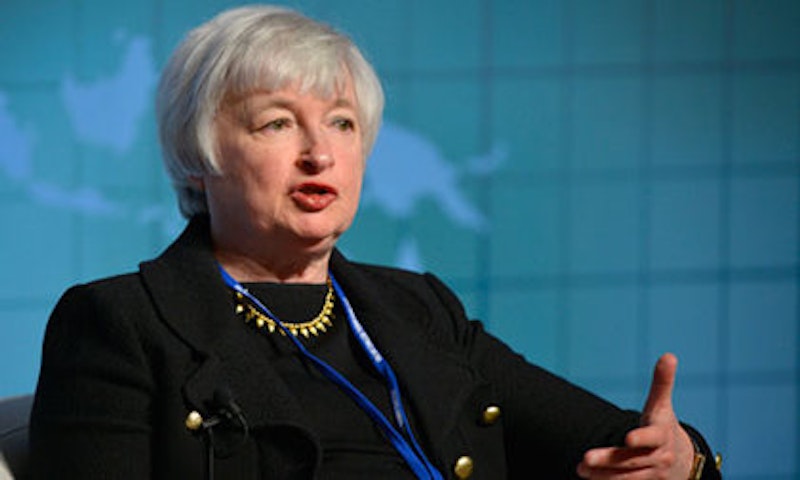 I was pleasantly surprised by Federal Reserve Chair Janet Yellen’s speech last week outlining her great concern for growing economic inequality in America. “I think it is appropriate to ask whether this trend is compatible with values rooted in our nation’s history, among them the high value Americans have traditionally placed on equality of opportunity,” she said at the Federal Reserve Bank in Boston.

I’ve never heard a Federal Reserve chair comment on anything but monetary policy. These people are all numbers and usually shy away from any contentious political or social issues, but it was refreshing to hear Yellen address the subject of the ever-widening gulf between the rich and the poor that grows each year.

According to Yellen, “The share of wealth held by the lower half of households fell 3 percent in 1989 to 1 percent in 2013” and “wealth inequality is near its highest levels in the past hundred years… probably higher than for much of American history.” Yellen offered four sources of economic opportunities for mobility that are lower in the U.S. than in most other advanced countries, including the means to raise children, access to education, owning a small businesses and inheritance.

I applaud Yellen for bringing this debate to the forefront, but economic inequality doesn’t have a real immediacy for people or politics regardless of the consequences. The conflicts in Missouri between protestors and police are a glaring example of economic inequality and criminal justice. Financing for early education has not increased yet the cost of higher education skyrockets.

Yellen fears that “The large and growing burden of paying for higher education may make it harder for many young people to take advantage of the opportunity it offers.” I know young people now who struggle with decisions about entering higher education and the time it will take them in the workforce to pay for student loans. Small businesses have declined, and for people I know both young and old, there’s a fear of risk in building wealth as an entrepreneur.

Inheritances seem to be the only bright spot in the outlook. Large numbers of less affluent people were receiving windfalls and wealth gains at an age when they were looking at sending children to college. Few predecessors would’ve broached on this topic and it shows Yellen’s ability to perceive the role of Fed chief not just a monetary advisor but as a spokeswoman to promote equality and opportunities in our country and to understand the financial challenges that ordinary citizens and families face.