Goofy may be our only escape. 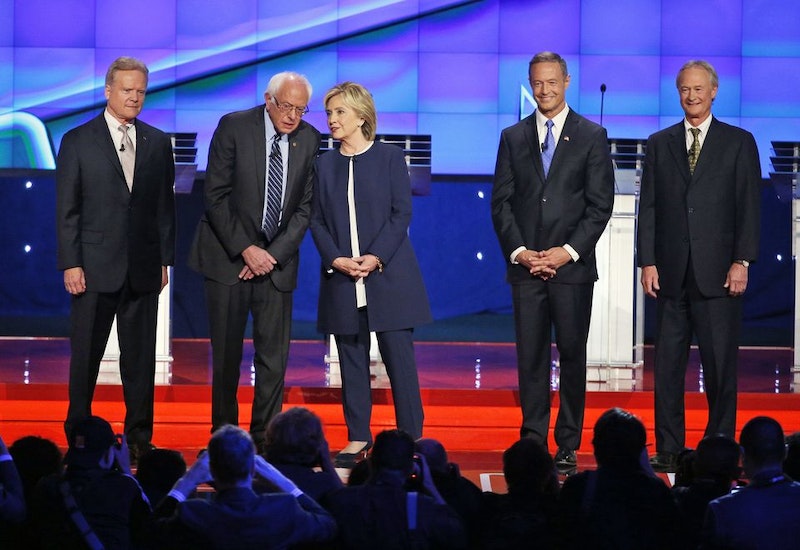 The real winner yesterday was, of course, Donald Trump, who tweeted a link to this amazing video featuring dubstep and doobie, celebrating his awesomeness and the fact that you “can’t stump the Trump.”

But later in the day, there was also a five-candidate Democratic debate. No one remotely sane looks to the Democratic Party for acceptable politicians, but Jim Webb seemed like a nice, earnest guy. Martin O’Malley seemed more like a gay robot—a slightly nervous gay robot—and thus incapable of providing a real alternative to the lesbian robot Democratic frontrunner, Hillary Clinton (who hates the NRA almost as much as O’Malley does).

But did Bernie Sanders yell, you ask? Not for the first six seconds or so, no, but then he mentioned the Citizens United Supreme Court decision and brought the volume, which kept rising for the duration of his opening statement, making it especially exciting—and for just a moment frightening—when he said that we “must leave this planet” and paused for a tantalizing (perhaps overly revealing?) moment before completing that thought with something about Earth becoming a better, cleaner place and all that.

And then everything changed, once O’Malley and Clinton began yelling about how much they hate guns—and suddenly the canny Sanders saw an amazing, rare strategic opportunity to present himself as a moderate, stressing the fact that rural areas will simply never be as eager to give up their guns as the voters of major urban areas. O’Malley, former mayor of the despair-inducing hellhole that is Baltimore, tried to get away with saying the gun issue in no way hinges on rural/urban cultural differences—and Sanders quite rightly said that it does.

Having been a child in a rural area and an adult in a very urban one, I have seen no single political issue that more neatly divides people into (1) cowardly urban voters eager for their corrupt police forces to come running to their rescue and (2) rural voters who know they cannot wait for cops to wend their way through the woods while bears break into the garage.

Lincoln Chafee—an inhabitant of New England, as Sanders and I have sometimes been—twice proudly likened himself to a “block of granite” rather than a morphing party-switcher, and I couldn’t help but wonder what the dimensions of that block are in meters.

But really, the invisible gorilla in the room was bumblin’ Joe Biden, who I assume was watching and slowly but surely concluding, “Yeah, I guess that settles it. It’s time to run. Even I can beat these people.”