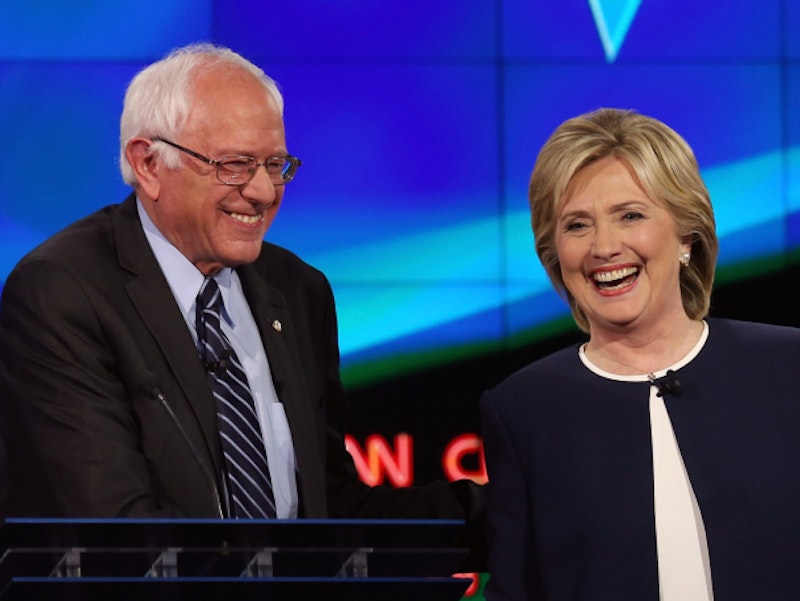 They said she had to be more authentic, more human. Well, okay. Last night Hillary had a bathroom break. Not anything awful, but she had to go. She ran out during a commercial, then got back just in time. Anderson Cooper ribbed her. “All the candidates are back, which I'm very happy to see,” he said. The audience laughed and Cooper played up the mystery. “It's a long story,” he said to those of us at home. Then: “Let's continue, shall we? Secretary Clinton, welcome back.”

The former Secretary of State, sounding chipper, answered, “Well, thank you.” That was enough to get the audience going again. Then Clinton said, “You know, it does take me a little longer. That's all I can say.” She meant about going to the bathroom, or using the toilet. She had just made a good-humored, no-fuss remark about what it's like for women to take their clothes off and excrete.

Moments later she was listening to a question about a crown and how it was being passed back and forth between her family and another. “Well, I can't think of anything more of an outsider than electing the first woman president, but I'm not just running because I would be the first woman president,” Hillary said. A woman gets back from the toilet, remarks on women's special toilet needs, and then makes a point of reminding us she would be the first woman president. To me that's very confident. Somebody feels pretty comfortable with her authority when she can do this. I mean that in a good way. Somebody in charge had better be immune to petty undermining. Hillary may be secretive, but she doesn't spend much time on self-riddling or resentment, the pastimes that kept twisting her fellow indestructible office-seeker, poor Richard Nixon.

John Wayne used to say, “I don't act, I react.” Hillary's best debate moments came during her wait time. Another contender would be saying something about her. She would swivel her head toward him and set her chin. Her eyes would go wide and she would listen. It was like she was on alert but at the same time getting a kick out of the moment. Basically, she seemed like somebody who didn't mind fighting.

Listening to Lincoln Chafee, Hillary bent her mouth at the corners of the lips, turned up the edges of a smile to get one ready for when she launched her reply. But then she listened some more. Chafee was explaining why Hillary's emails really were a huge issue, a bad thing on a big scale. “We told the world that Saddam Hussein had weapons of mass destruction, which he didn't,” Chafee said. So that's why we're supposed to be upset about Hillary's email habits, because George W. Bush lied about WMDs. The smile stayed on Hillary's face. I don't think it grew, but possibly it deepened. There hung in the air an unspoken “Oh bruh-therr, that's what you've got?” She wasn't mad, she was tickled. By now she was taking in the sight of this thing, a Chafee.

Anderson Cooper asked, “Secretary Clinton, do you want to respond?” Her face swiveled away from Chafee. “No,” she said, and her smile seemed completely authentic.