There’s a Dirty Arm Up That Sleeve

Basil Gildersleeve could be in trouble, more nonsense from cash-rich New York Times and Trump as Denny Crane. 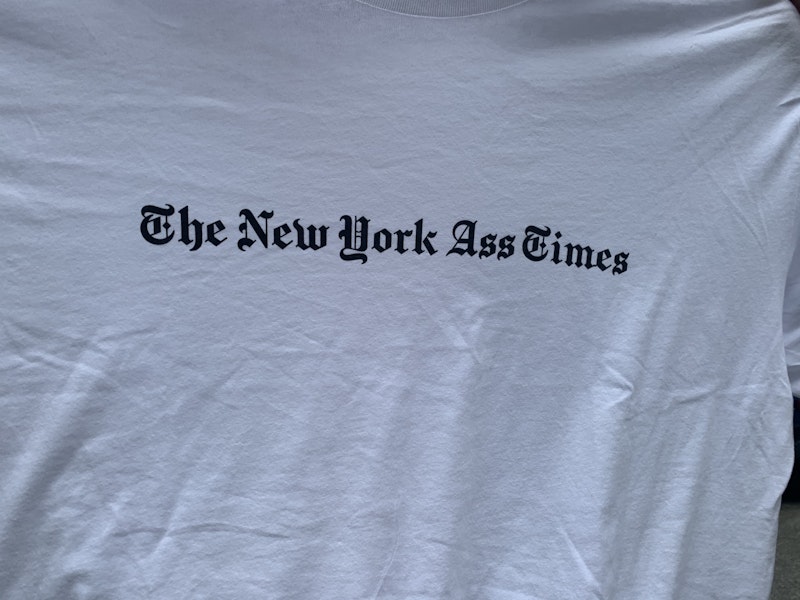 It’s comical when The Valerie Solanas Times—or, as shown above, in a t-shirt that was a birthday present from my son Nicky, The New York Ass Times—pretends to care about other newspapers. As the country’s now in “late-state media,” manners might dictate that the Times admits that it’s one of the few media enterprises that’s prepared to prosper for at least another decade, since it’s re-jiggered its business plan to compete digitally with Google and Facebook. But who’s versed in Emily Post’s etiquette manual today, at least on social media? As a result, on Monday morning the Times ran a crocodile tears op-ed by Margaret Renki headlined “Don’t Cancel that Newspaper Subscription,” that pleaded with readers not to kill an already dead industry.

Here’s where the comedy comes in, as cliché-happy Renki writes: “As the ‘first rough draft of history,’ journalism will always be prone to mistakes, no matter how assiduously reporters and editors try to prevent them. But canceling your newspaper subscription because of one ad, no matter how hideous—or because of one deeply offensive headline, or one flagrantly dangerous op-ed—will not cure journalism of what ails it.” Never mind that Renki’s getting in yet another shot at fired Times editorial page editor James Bennet for running a ghost-written op-ed by right-wing Sen. Tom Cotton and try and remember the last decade when the Times and Washington Post—which regularly run editorials disguised as news articles that have no named sources—employed reporters and editors who “assiduously” attempted to prevent mistakes.

In the digital age, “mistakes” are rarely corrected, and if so, usually long after the damage has been done, and that’s partly because even the leading dailies have forsaken a research department in favor of high-salaried click-worthy “name” columnists. I’m all for innovation in business models, but an institution like the Times (still respected by hundreds of Americans) ought not be so hypocritical. Pardon the piety, but it still, after years of deception, gets my goat when The New York Times condescends (or downright lies) to its masochistic readers.

As the current cancel this-cancel-that movement (or, less generously, fad) moves along at a rapid clip—the name of Woodrow Wilson, the First-Amendment-hating 28th American president, was just stripped from a building honoring him at Princeton University—I wondered whether the benefactor of my alma mater (founded in 1876), Johns Hopkins, born on a Maryland plantation in 1795, was posthumously running afoul of the Cancel Police. As it turns out, Hopkins, a brilliant businessman and later philanthropist, is in the clear, at least for now. Not only did his parents free their slaves in 1807, but Hopkins was also an ardent abolitionist, not entirely common in the what-side-are-you-on state of Maryland.

But no so for Basil Gildersleeve, a classical philosophy professor hired by the University’s first president, Daniel Gilman (he’s clean), for the school’s beginning slate of notable scholars. Gildersleeve, raised in Virginia, fought for the Confederacy, and after the Civil War returned to the University of Virginia. I’ve no idea if any statues of Rebel Basil are on JHU’s Homewood campus, but one of the dormitory halls is named after him. Gildersleeve was next to my own hall, Griffin, and during my freshman year (1973-’74) I had a lot of buddies there, including Pete MacGuire, Joe Griffith, Grant Abrams and Bobby Reiser.

While Griffin Hall was quiet—the utilitarian closet that I shared with my Texas roommate was across from a fellow who was on the wrestling team, and I wouldn’t be surprised if the late-1980s Oakland A’s got some steroid tips from him—Gildersleeve rocked. Loud music, parties in the corridors, just a fuckload of mischief going on. In the spring of 1974, the year of The Streak, a dozen revelers, amped by sloe gin, vodka and beer, shed their garments one early evening and ran around the campus in the altogether. It was a fun but weird spectacle (I didn’t participate), although kind of strange considering that just five years previously even a staid, pre-med oriented school like JHU was engulfed in student takeovers of administration buildings. From the SDS to The Streak: turned out that the revolution wasn’t televised because there wasn’t any revolution!

Six months ago it was inconceivable that friendly and polite Minneapolis (or so the perception went; and on my one visit there in 1985 I found it accurate) would hog much of the country’s news limelight. After George Floyd was murdered by a cop there, the local City Council voted to “de-fund” the police over the objections of now politically-tarnished Mayor Jacob Frey, whose national ambitions went up in the same smoke that destroyed so many buildings there.

In a move that will undoubtedly be replicated in other cities, three of Minneapolis’ “de-fund” supporting City Council Members—Andrea Jenkins, Phillipe Cunningham and Alondro Cano—are now protected not by the police but a private security firm at the cost of $4500 a day. On the taxpayers’ nickel, naturally. Here in Baltimore City, where the crime rate remains constant—unlike New York City, where blue flu has led to a 1970s-like spike in crime—there are “de-fund” rumblings.

As I wrote two weeks ago, I’m no fan of the police department as currently constituted, bloated by union largesse, but I don’t like the direction this is going. My family lives in a quiet, fairly affluent enclave in North Baltimore, and I can envision our Neighborhood Association hiring a private security firm, with men and women carrying guns, patrolling our streets, at a very hefty fee for residents who already shoulder so much of the corrupt city’s tax burdens. I repeat: bust the police union in Baltimore (and other cities) and replace the “bad apples” with young men and women who aren’t tainted.

On Monday, a likable person I follow on Twitter made this comment: “In 2000, Dubya was getting pummeled by the media until late summer. Gradually, the media hivemind began to hate Gore and his team. The Bush coverage moderated somewhat. It was odd to watch in real time. Tiny chance it'll happen again.”

That’s what it looks like on July 2nd, but I couldn’t find anyone who’d bet a Franklin (haven’t heard much about canceling Randy Ben, but there’s time) on the election. Granted, I asked for odds, but I still figured a few would pony up.

In many ways, Trump is like Denny Crane from the terrific TV show Boston Legal that aired from 2004-’08. As you might recall, William Shatner’s Crane was the sexist, vulgar and tongue-tied lawyer who said he suffered from “mad cow,” to excuse his verbal gibberish. Not unlike Trump, though the current president would never admit to any infirmity. Crane, a senior partner at a law firm, was a laughingstock among his colleagues (save James Spader’s liberal Alan Shore), but, as he liked to point out, he never lost. As the multitude of morons on Twitter likes to say, “Let that sink in.”